It’s time for another foray into the world of BBQ. In recent months, I had the pleasure to enjoy stellar bbq in Ann Arbor and some quality ribs in Atlanta, but it’s time to move a little closer to home. For this episode, I traversed the wilds of Highway 49 to Richland, Mississippi. There, in a rather homely, wood clad building, sits Old Timers Bar-B-Q.

I’ve driven past Old Timers Bar-B-Q on a pretty regular basis for the better part of a decade, but I’ve never been quite sure what to make of it. For the longest time, I thought it was an empty building. I never saw any cars out front, lights on, or any real indication of being open for business, but times have changed.

Walking into Old Timers, it’s painfully apparent that I misjudged this restaurant’s outward appearance. Instead of a continuation of the shack like façade, there’s an open feel inside with plenty of flags and pictures, mostly Greek, for decoration. There’s no sense of manufactured homeliness with printed tin signs and old coke paraphernalia. It’s a simple menu at Old Timers, mostly various preparations of the same sliced beef brisket and Boston butt. I figured that a plate of mixed beef and pork would cover pretty much the entirety of the menu.

While waiting on the plate to be prepared, I asked the man behind the counter a few questions. I could only assume he was the owner and he said they had been serving the same beef brisket and Boston butt for 45 years. When I asked him which type of wood they used, I was entirely perplexed by his answer of “whatever wood comes through the door.” I’ve never heard such a nonchalant approach to types of wood at a bbq pit.

Soon enough a few plates were ready and I was called to get them from the counter. It really was a big mess of sauce covered meat. Despite having reservations about Southern style brisket, I decided to start with the brisket. 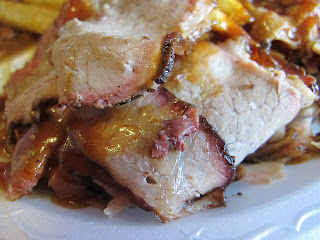 It was actually quite difficult to find a piece of meat not doused in sauce. Eventually, I found one and was impressed with the smoke ring and slow cooked crust. Unfortunately the taste wasn’t up to par with appearances. It was a dry, but relatively beefy and smoky cut of brisket. It did a decent job of standing on its own, but I’m not sure if the sauce actually improved the meat. This wasn’t a terrible piece of brisket, but it was sliced annoyingly thin and had an odd, dry texture.

Moving to a more Southern specialty, I turned to the sliced Boston butt. 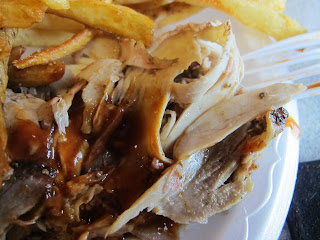 This was certainly the less smoky of the duo. 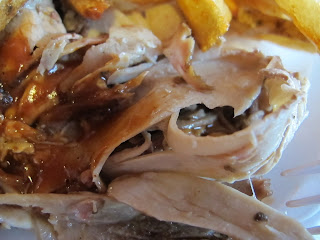 It was also the juicier of the two, but still sliced razor thin. 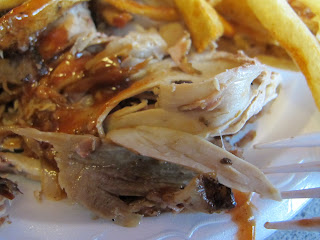 Actually this pork didn’t really even need any of the sauce as the pork could stand on its own. It might have been a little shaky but it could at least stand up straight.

Not listed on the menu, Old Timers also offers ribs. 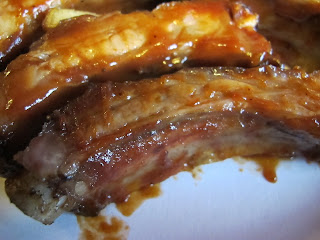 There’s no smoke ring or real smoky flavor at first, but it grows into a distinctive aftertaste. 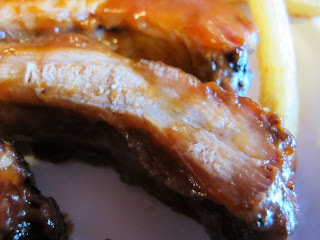 Thankfully the sweetness of the sauce doesn’t overpower the flavor of the ribs. Another plus for these ribs was they weren’t overcooked to the point of the meat falling off the rib. They weren’t spectacular but a good try at some subtlety smoky ribs.

As is the case with most plates of bbq, this plate came with a few sides. The first side was French fries and being poorly cooked and poorly salted, they’re best left unmentioned. The second side was an order of baked beans. 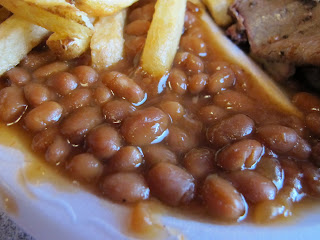 With little more than beans and a rather subdued sweet sauce, these were decent baked beans. I was a little surprised to see pork-less baked beans, especially in a bbq restaurant, but what can you do?

On the way out, I couldn’t help but notice the smoke house at Old Timers. 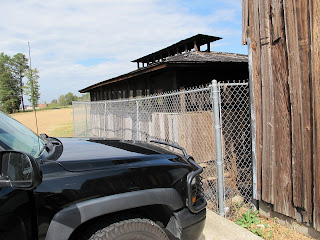 With a little breeze in the air, it’s hard to miss the tell tale signs of hard wood smoke. 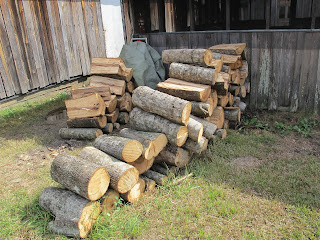 Apparently this is the wood that come through the door that day. 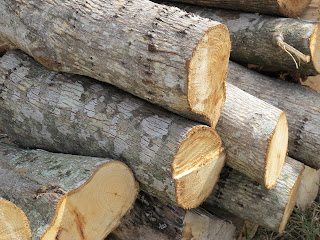 I’m not very good at picking out particular woods, but it looks like red oak and hickory to me.

I wasn’t quite sure what to make of the bbq at Old Timers, especially after reading the findings from the North Mississippi Commentator. I knew the bbq at Old Timers was peculiar, but I can’t imagine why someone would bbq the meat, refrigerate it, slice it and then reheat on the griddle. The bbq isn’t awful, but it isn’t really worth a trip either. It’s really more a case of you happen to be in Richland and you want something vaguely smoky. In that case Old Timers Bar-B-Q is right up your alley. For all other situations, you’re best to look somewhere else for quality bbq..

I agree with the assessment. A lot of places do this-- the cook the meat once a week, then chill and slice on a deli slicer. Abe's in Clarksdale and Goldie's Trail in Vicksburg also use this method.

I pretty much hate it.

What I love about Old Timers, though, is that they do have a very very old-school pit, and cook over wood. I just wish I could eat the 'q right off of it. I suspect your tune and mine would change. Because of the old-school pit, I'll continue to go if passing through and will comment it to others with a warning.

I really wonder if this is all a legacy of how barbecue began as a commercial roadside food-- a way to cook a lot of pork at once, and then slice of the sandwiches as the folks came through for it. I think this may be an older style still living on in the present.

Thanks for the link.