Situated in an old home on Congress Street, Two Sisters Kitchen is a Jackson landmark…at least that’s what everyone says. Personally, I never have been a big fan of country or southern style buffets. You may get a large variety of food and obscene amounts but the quality almost always suffers. Even so, I knew I should give Two Sisters Kitchen a try. So, with open minds, Sam and I tried out the lunch buffet at Two Sisters Kitchen.

Walking through the front door, you can’t miss the buffet. What surprised me is just how small it is. I wasn’t expecting a mile of steamer trays, but at Two Sisters the selection is pretty succinct. After being shown to a table, I immediately returned to the buffet and picked out a plate full of the kitchen’s offerings. 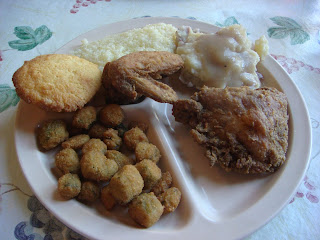 It was a little heavy on the starches but it was just the first plate.

Starting with the fried okra, I was pretty impressed. 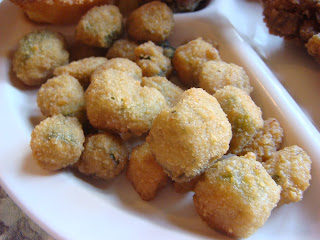 This okra had been well fried and was quite tasty, although they were in dire need of salt.

Moving on to the grits, I was a little disappointed at what I found. 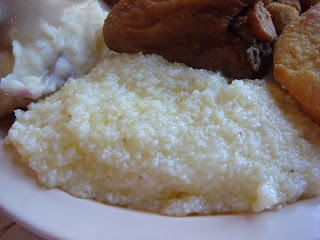 I realize everyone in south hasn’t realized the virtues of stone ground grits, but these instant/ quick grits are just boring. That being said, for Quaker Oats grits, these grits were buttery and quite good.

One true standout from the buffet line was the mashed potatoes. 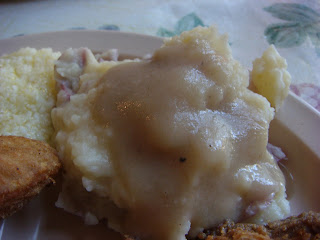 Served skin with a creamy, buttery texture, these mashed potatoes were fantastic. As for the gravy, it was all right but it needed a good shot of black pepper.

Realizing that the Two Sisters Kitchen is known for their fried chicken, I knew I had to try a piece of two. 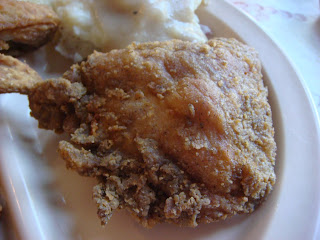 I realize this thigh had been on the buffet for a little while, but this was still a quality piece of chicken. The skin was dense with, for the most part, a beautiful crunch and not at all greasy but with a heavy pepper flavor. There was a subtle flavor to meat, not the real forward chicken flavor that I look for in a quality piece of fried dark meat. Surprisingly this thigh wasn’t at all juicy. It wasn’t dry, but not the moist, flavorful meat that I was expecting.

Knowing that fried chicken is especially susceptible to the pitfalls of the steamer tray, when I heard there was a fresh batch being put out, I immediately grabbed a fresh plate. 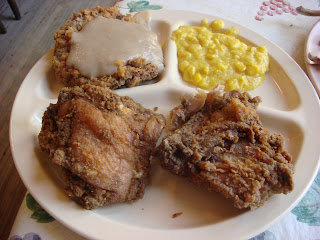 Well, this fresh chicken was more of the same. 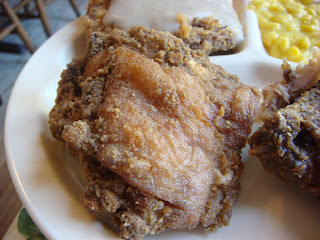 The chicken was still hot from the fryer, but not much juicier than the previous pieces.

It’s always interesting to see a country fried steak on a buffet line. 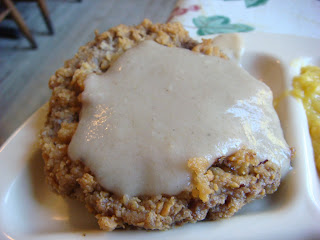 This was like a big Dairy Queen steak finger, a questionable beef product and full of salt but pretty good with gravy.

Something seemed amiss about the creamed corn. 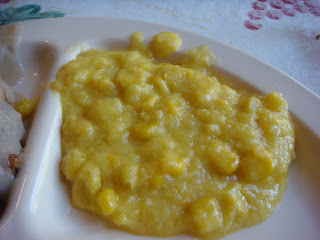 This corn was sweet, almost unbearably sweet and yellow. Actually what was really surprising is just how little corn was in this helping. Sure there was a lot of creamed bits but not much in the way of actual kernels.

How about some other southern favorite, black eyed peas? 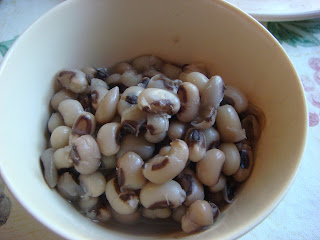 Well, these peas were a waste. They were watery, cooked to death, and too salty for their own good.

Before moving onto dessert, I couldn’t forget about the ubiquitous southern side of cornbread. 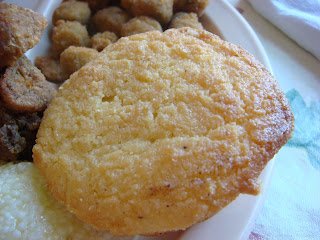 Well in the case I probably should have forgotten it. This cornbread while quite dense lacked the essentially saltiness of southern cornbread and replaced it with an odd raw flour taste.

Two Sisters Kitchen is known for two foods, their fried chicken and the bread pudding. 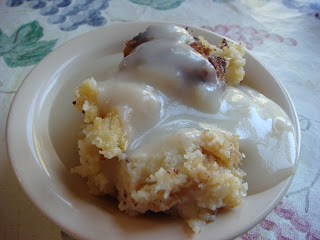 Still warm and full of a simple bourbon sauce, this was a pretty good bread pudding. Despite lacking a buttery mouth feel and a real richness, the cinnamon flavor and bourbon sauce made this a fine bread pudding. This wasn’t anything too outstanding, but not too shabby.

I can say with certainty that the location and kitchiness of Two Sisters Kitchen make up a significant amount of their appeal. The food, while substantial, was far from noteworthy; the relatively famous fried chicken and bread pudding were pretty fair. As I stated beforehand, I’ve never really cared for the Southern/Country style buffet. That being said, Two Sisters Kitchen is a decent lunch choice, but I think it hardly deserves the title of best fried chicken in Mississippi.

You really must have gotten a bad couple of pieces of chicken. I always go for the breasts, and yes, it definitely makes a huge difference if you get them fresh out of the kitchen. This is not just the best fried chicken in Mississippi, but with apologies to my late mother and grandmother, it is the best fried chicken on earth. Cornbread? Really? They have cornbread? I have eaten there several hundred times, and did not know that! I guess I just can't see past the melt-in-your-mouth biscuits.

Good review. I agree, the fried chicken is overrated. The veggies are a mess. Pricy and cafeteria food.

I can agree that most of the food is sub par and overpriced, but cornbread? Honestly their rolls are divine and you were mistaken not to try them. I have also never had dry fried chicken there or "not dry but not moist" chicken. I entirely disagree with the bread pudding assessment. It is delicious and certainly not something to be glanced over.