Famous for their ribs, Montgomery Inn is a Cincinnati institution, but I have no idea why. Scrolling through chowhound, urban spoon, practically every food site, I kept seeing comments about ribs boiled to oblivion. I have no problem with ribs that are not cooked in a smoker, but there’s just something evil about boiling ribs. Needless to say, I had stricken Montgomery Inn from my list of potential spots. However when asking for Cincinnati recommendations on twitter, Montgomery Inn kept popping up, especially from JoshGrillsItAll. So when driving from Cleveland to Nashville, I drove through Cincinnati just around lunch time. Boiled or not, I decided to see try the Montgomery Inn ribs for myself.

After finding parking on the street, I couldn’t help but notice the sign on the front of the Montgomery Inn. 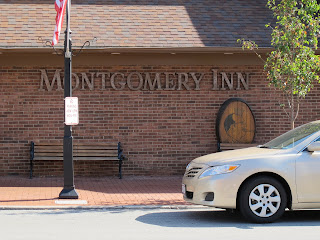 That was an interesting caricature. 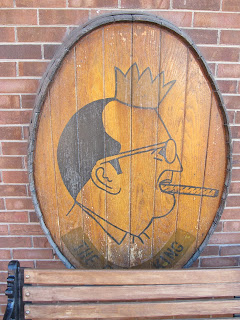 Once I got a little closer, I noticed it was the founder of the Montgomery Inn, Ted Gregory and there was the title “Rib King” underneath the picture. According to the restaurant’s website, this was a title bestowed upon him by a local critic.

Royalty or not, there was something disconcerting about standing outside the Montgomery Inn. I couldn’t see a smokestack or smell smoke anywhere. Inside it was just as odd. Everything looked clean, shiny, and new, not at all like your classic rib joint. Actually that’s not entirely true, both Rendezvous and the Original Corky’s are just as clean and well kept and they turn out some ridiculously good bbq, but you can’t miss the smoke outside their restaurants.

The menu at the Montgomery Inn is pretty expansive ranging from the oddity of Cantonese Shrimp to salads and seafood, but I was here for one reason, the ribs. I wasted no time in ordering a full slab of the “Barbecued Choice Pork Loin Back Ribs” with famous Montgomery Inn Barbecue sauce and a side of the Saratoga Chips. 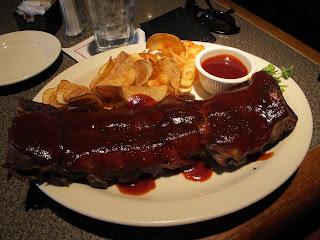 It certainly is a full plate of food, but right away I could tell there was something wrong with this ribs. 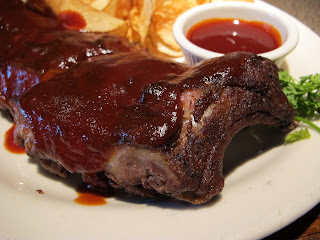 Not only were these ribs overcooked to the point of literally falling off the bone, there was no smoke flavor or any real flavor to the meat. 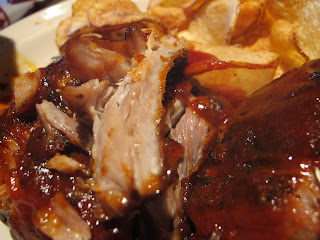 The ribs looked like they had been baked or grilled. 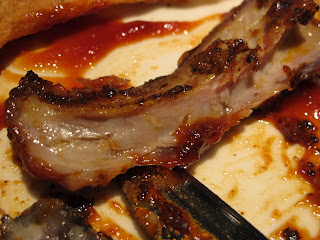 Conspicuously absent was any sign of a smoke ring. I know that a smoke ring can be faked but it’s still a useful indicator of quality bbq. Instead there’s plenty of that pale grey look that you usually get from boiling pork.

I know that some people rave about the quality of the bbq sauce at the Montgomery Inn. 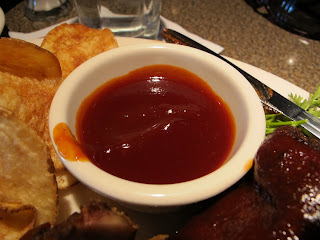 Let’s just say I was less the impressed. This sauce dominated everything on the plate. If there was any flavor to the ribs it was overrun by this syrup sweet and obscenely thick sauce. Sure, there were the distinct flavors of ketchup, brown sugar, black pepper and maybe a little cayenne in the sauce. Those are all viable bbq sauce ingredients, but this was just a noxious combination.

I can’t forget the Saratoga chips. 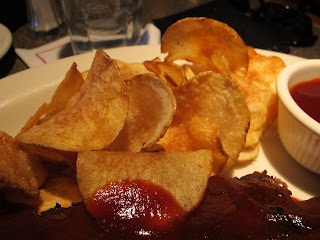 Actually, yes I can. There’s nothing special here. 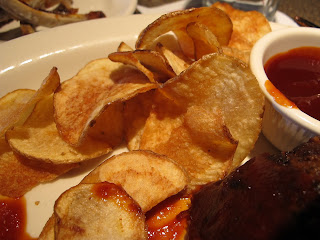 They’re a lot like kettle cooked chips and nicely salted, but they’re pretty mundane otherwise. I tried dipping a few in the bbq sauce and I just couldn’t take it.

When I ordered the ribs, I had asked what sort of wood was used. At first I was stonewalled by the waitress but eventually she said the ribs are cooked off site and then finished in an oven. I know some bbq places are especially protective about their rub recipe but I’ve never had anyone be so tight lipped about wood. After trying everything, I knew why she couldn’t tell me the wood type; there isn’t any smoke involved in these ribs. These ribs really did taste like they had been boiled and then baked.

I know that some people say that the Montgomery Inn never claimed their ribs are barbecued, but that’s how they are labeled on the menu. I had tried to go in with an open mind. I tried to tell myself that these ribs would be different. These ribs weren’t just different, they were bad. I barely ate a third of the rack, there were simply no redeeming qualities. I realize that the ribs at the Montgomery Inn are a Cincinnati institution, but like Ohio’s other favorite, Skyline Chili, I think once is enough for me.

Montgomery Inn Ribs suck. Thats why they sell more pork ribs than any other restaurant in the world. : )

-Thank you for the textbook example of argumentum ad populum. I realize that people have an affinity for Montgomery Inn and their ribs, but I'm still struggling to understand why.

More to the point, by your specious reasoning, McDonald's makes the best hamburger in the world.

Glad I stumbled upon your review, I too thought that the ribs were smoked. How can they falaciously claim to have indelible bbq ribs when they don't even smoke 'em.

Anyhow, thanks for the review, saved me $25.

Thanks for the warning. Boiled meat? Isn’t that how they cook it in the UK? No thanks!

my parents are from memphis and im pretty picky about my ribs so i was very skeptical about this place.the sauce is a sweet mess and the ribs arent even smoked!!!!!!!!!!! i'm from northeast ohio and we have rib joints ten times better than this place...disappointing!

I'm from cincinnati and had been brought up to believe these ribs were good. After a few years of extensive traveling and dining, and a recent visit to the 'inn' I too believe these ribs suck and that successful marketing campaigns had me previously brainwashed. The house salad and rye bread werethe best parts of the meal. sad. This king needs to be dethroned.

Totally agree! I am from the east coast and have had real ribs from a ribs joint. I have also smoked ribs my first time using a smoker and they turned out miles better than MI. People in Cincinnati have an affinity to all things sweet. A very successful pizza place (LaRossa's) has very sweet sauce.

I was told from a former cook that MI steams their ribs overnight then slops sauce on them. Any schmo can do that. Thank you for posting, good to know I am not alone.

Had that same reaction a number of years ago when I ate at the one in Dublin. Was kind of excited by what I'd heard...then saw the prices.

And then I got my meal. It was terrible. I was absolutely dumbstruck by what I'd just paid for.

Anymore, in Columbus, I just go to Ray Ray's BBQ stand in Clintonville.

I can tell you for a fact, seeing as I worked there for almost 2 years(at the original Montgomery location). You are paying for nostalgia. Over 20 years ago and prior the ribs were smoked and they were awesome, and the sauce was always freshly made. It was truly worth traveling a distance to eat. That is what drove me to want to cook there. Boy was I surprised when I started working there. The ribs I remembered from my childhood no longer existed. The sauce now mass produced in a factory came in 5 gallon buckets that get dumped and rewarmed in a steam kettle in the back corner of the kitchen. The ribs though are far more disappointing. They come in frozen, stored in a giant walk in freezer in the basement. They are not thawed prior to being put through a standard conveyor oven(the kind you see at a pizza restaurant)and then picked up with tong and dipped into a pan of hot barbeque sauce that came from the kettle mentioned earlier. Their "Amazing" pork chops are cooked the same way(pork chops go through the pizza oven twice). There is almost nothing cooked fresh their even the calamari and crab cakes come in frozen. In my opinion if you saw the price of the crab cakes or calamari you would(hopefully like me) expect the food to be freshly made. On top of that that don't even hire proper cooks. Most of the kitchen staff make barely minimum wage and either carpool or take public transportation from what most of America would instantly classify as the "Ghetto" or "Hood". When this is the common method for staffing your restaurant.... You get what you pay for! These facts led me to leave there, and I have never eaten their food since. That was almost 15 years ago. I still know and associate with many people who still work there, and nothing has changed since I left. Please for your own good don't waste your time or money eating there. You can get better ribs at O'Charlies.