I suppose it was inevitable. I had finished the drive from Cleveland to Nashville in good time and I was meeting Shelly and company for dinner again. Naturally this brought up the topic of where we should eat. Still looking for something unique to Nashville, I had my stomach set on trying the second hot chicken place of note, Bolton’s. Shelley, Amy, and Carrie had other ideas; Ideas like Southern home cooking, family style dining, meat and threes, a reasonable price for a mind boggling amount of food. I had been looking for a sign that I was back in the South and I thought that the return of 70 mph speed limits was it, but no, it was Monell’s in Germantown.

Situated in a Victorian era home, I can’t deny that Monell’s is a charming restaurant. It’s actually refreshing to see a Southern restaurant that hasn’t been degraded to buffet lines, giant warehouse-like buildings, and a blatantly apparent quantity not quality approach. One thing that did throw me was the number of tables at Monell’s. With only four or five tables in the whole restaurant, you’re seated with other groups, family style. Since the concept hinges on people passing the food, I suppose it forces you to talk to your neighbor.

Eventually Shelley, Amy, and Carrie arrived and we were seated at a table with a group of four Australians who were traveling across the US. In between pangs of jealously at their four week vacation and glasses of overly sweet tea, fresh plates of food began to arrive at the table. First was a bowl of cucumber salad. 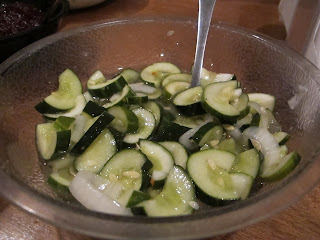 Simple and sweet, I caught myself looking for chilies hiding in the bowl. I had to remind myself this was a Southern cucumber salad, not a Thai version.

Even though we were at Monell’s for dinner, I suppose it’s hard to have a Southern home style meal without biscuits and gravy. 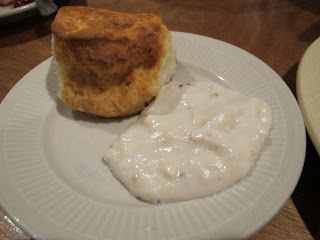 I still this is more of a breakfast item, but the biscuits were flaky but not too rich. The gravy needed some work to get up to snuff. Before I added some salt and pepper, this gravy was a little floury and bland.

When it came to the bowl of cinnamon apples, I wasn’t quite sure what to make of them. 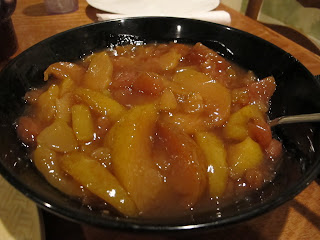 The apples had been cooked to mush, the whole bowl was syrupy sweet, and it was loaded with cinnamon and sugar. Why was this dessert style dish being served with the meats and vegetables?

The next bowl was much more what I expected from this Southern family style meal. 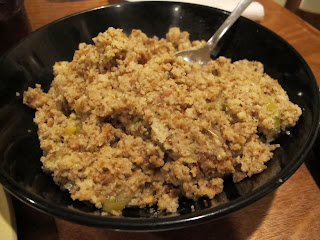 Ah, the wonders of a giant bowl of dressing, what a way to use some extra cornbread. This dressing was full of large chunks of vegetables, especially celery. While moist, I was disappointed at the richness of this dressing. I was hoping for a rich, gelatinous chicken flavor to the dressing, this one was a little watered down. Even with those shortcomings, it was still a tasty bowl of dressing.

Finally, with a bowl of green beans, we got some actual vegetables. 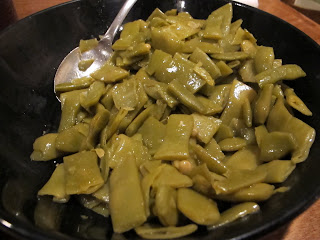 These may have been canned green beans, but I didn’t care. The green beans were plump, juicy, and bursting with black pepper. I gave some serious thought to hoarding the bowl, but I knew that might make a bad impression on our Aussie table mates.

I never have been a big fan of casseroles, and the serving of Zucchini Casserole at Monell’s only helped reinforce that. 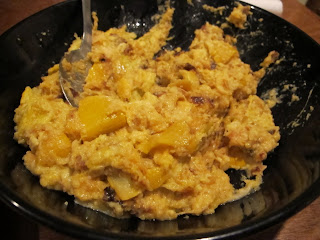 There was no pleasant texture to this dish, just a uniform mushiness. What was in this bowl of zucchini casserole was an odd sweetness, a feature that didn’t help this already maligned dish.

Next was a bowl of corn pudding. 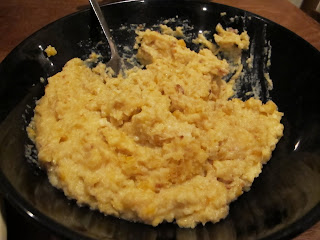 Maybe I never grew up eating this sort of thing but I don’t see the attraction of mixing a box of corn starch with a can of creamed corn. That may not be the ingredients list but that’s what it tasted like. 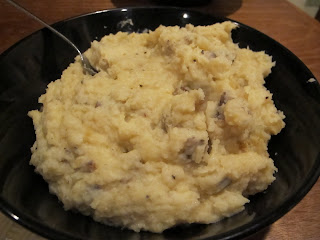 Well, everyone at our table loved this mashed potatoes. These potatoes had a real homemade quality to them. A little on the lumpy side but these potatoes were still a quality dish.

Knowing that every Southern style restaurant prides itself on quality fried chicken; I had high hopes for the fried chicken at Monell’s. 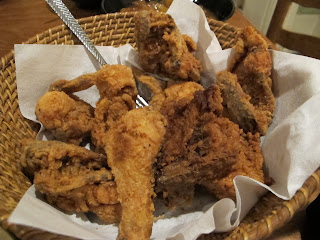 Predictably the white meat was achingly dry, but I surprised to find the skin’s taste to be an annoying combination of raw flour and salt and lacking any real crispness. The dark meat was juicier and a much better meat, but the thighs and legs suffered from the same combo of raw flour and salty skin.

Sadly the fried pork chops suffered the same dry fate as the white meat of the chicken. 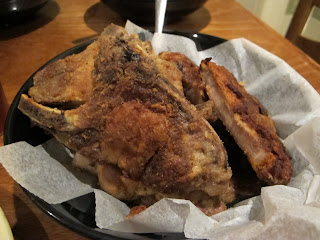 Being a pork chop with a lean cut, these chops already had the deck stacked against them. Each piece was salty, overcooked, and extremely dry; it was a porcine nightmare.

The last meat on the table was the baked chicken. 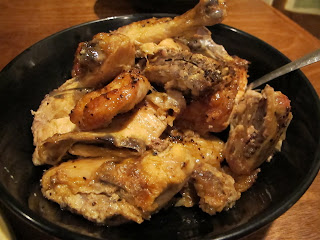 It’s hard to find good baked chicken. Most of the time it’s a combination of gummy skin and overcooked meat and this bowl of baked chicken was no exception. The skin actually had a decent flavor to it but it was gummy and couldn’t do a thing to hide the dry meat underneath.

Having gone through 11 bowls and plates of vegetables and meats, it was time for the 12th and final dish, Banana Pudding. 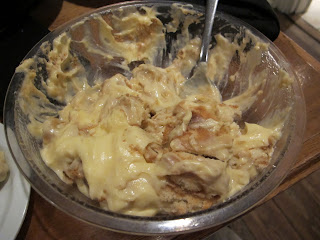 I’ve never gone out of my way to try any banana puddings but when the bowl was passed, I had to take a spoonful of two. 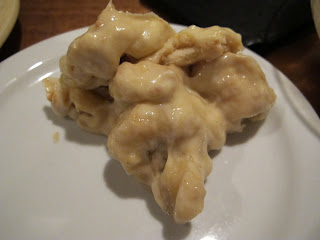 This pudding was creamy and rich but not overly sweet. At first I thought this was going to be a simple bowl of mushy bananas and soggy nilla wafers, but there were just enough crunchy wafers left to add a little texture.

For some reason this scenario plays out entirely too often. I go to a Southern style and/or home-style restaurant where people rave about the quantity and quality of the food, making ludicrous claims such as “it’s better than Mama’s”. More often that not, I decide their mother must be a terrible cook. I wanted to like Monell’s; it has so many positive qualities. There’s a ridiculous amount of food, it’s reasonably priced, the setting is both quaint and kitsch, and the people were friendly to a fault, but from the tooth achingly sweet tea to the mountains of overcooked chicken and pork, Monell’s was simply disappointing.

Just found this blog. I really like it. Next time you are in Nashville, try Martin's BBQ. Great guy and he has great food.

ur an idiot... typical yankee snob with no appreciation of southern soul food.

-I'm happy to hear that you like my blog. I'll be sure to try Martin's the next time I'm in Nashville. Thanks for reading.

-If you're going to insult me, please do so with proper grammar and spelling. I would also appreciate you having the gumption to actually use a name.

By the way, I was born and raised in Mississippi and I am a snob for good food. So, my dear reader from Jacksonville, I may not have the highest appreciation for Southern or Soul food, but I'm most certainly not a yankee.

proper grammar?
please, the point of communication is to get an idea across, you knew what he meant.
I AM a yankee and have an appreciation for food cooked right. While I agree with your assessment of the dry and mostly flavorless chicken and the dry pork, gotta [yeah, even a Mississipian can understand gotta] disagree about the corn pudding.
The corn pudding was the ONE food I remembered fondly from working for MONTHS in Nashville. The rest of the food in the entire city was no better than Denny's and I mean that as just about the worst slam a city's food can get. Even the "Steak houses" were mediocre at best.
and Cynical... you MIGHT want to look up the word, I don't think you have any idea what that word means.

>Anonymous #2
-You make a fair point, I understood what he meant. It just irks me when people say ur instead of you are.

I'm glad to hear that you have an appreciation for well cooked food. I try not to generalize people's tastes based on location, but it sometimes happens.

While I'm happy to hear that we agree on the overcooked meats at Monell's, I'll have to stand my ground on the corn pudding. Let's chalk it up to a difference of opinion. I didn't grow up eating the stuff, so I never developed a taste for corn pudding or its texture.

Wow, I haven't spent as much time as I'd like in Nashville, but to say the rest of the city is no better than a Denny's is quite a statement. Do you have any advice on places I should avoid the next time I'm in the city?

As for the the use of Cynical in the name of the blog, I'm aware that it's not the first meaning that you find in the dictionary, but it still works with the bitterly distrustful or pessimistic meanings. Regardless, I've been using the name for more than two years and I don't know what I'd even change it to.

Thanks for reading and I hope to hear back from you

Go to the one on 6th ave north. It's a lot better. the fried catfish is splendid

Thank God I found someone else who was underwhelmed by this place. The atmosphere is nice, but I was totally disappointed in the food. Dry overcooked porkchops, baked chicken and fried chicken my first (and last) visit. I grew up in south Georgia and I know good dressing when I see it. I knew before I tasted this I would be disappointed. It looked like a soggy mess of leftover cornbread mixed with chicken broth. Corn pudding starchy and tasteless. Mac & Cheese was like boiled elbow macaroni dumped into some cheese soup. Cucumber salad tasted like sweet pickles. Pasta salad had too much vinegar. "Mixed vegetables" with large chunks of half raw carrots, mushy broccoli and cauliflower. NOTHING had much taste. All the folks raving about this being like Mama's cooking must have had really bad cooks for mothers.