Apparently 10 pm is a little late for dinner on a Sunday night, at least in Cleveland. Knowing that most restaurants would be already closed for the night, Bill and I decided a good tavern or gastropub was the answer. Our first stop was at the Tremont Tap House and things were looking good. There was a large selection of beer on tap and a guy at the bar had food in front of him. Taking a seat at the bar, we ordered our respective beers and then asked for a menu. It wasn’t till the beers were in front of us that the bad news arrived. The kitchen closed at 9:45.

Un-phased, we finished our beers and went looking for someplace else. Normally, I’d have done a little more research on the area, but it was late and I had faith in Bill’s judgement….I think. After a couple of wrong turns, the gps finally found a signal and we headed towards the West Side Market and McNulty’s Bier Markt.

I wasn’t quite sure what to expect from Bier Markt. Judging by the “Belgian Fare” section of the menu and a fair number Belgian and Euro beers on tap and in bottle, I was thinking a sort of brasserie. Still, with a name like McNulty, everything seemed up for grabs. At the very least there were pizzas, good beers, and pretty good selection of antipasti, not bad for a late night dinner.

What better way to start a meal than with a large selection of salumi? 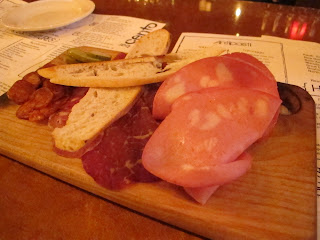 This was a simple platter of quality meats, nothing exception, just hugely satisfying. The mortadella was meaty, the bresalo was dry and beefy, the salami gentile was porky and full of pepper, and the chorizo was dry, intensely flavored with paprika, smoky and spicy. I may have missed out on the La Quercia prosciutto, but this was a fine selection of cured meats.

With a recommendation from Bill, I knew I had to try out the Pommes Frites, the first item under the “Belgian Fare” section. 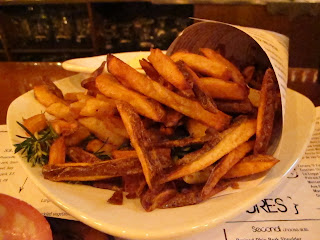 These were some well fried potatoes. They weren’t overly crispy but well salted and seasoned with garlic and rosemary. In addition to the paper cup of fries, we were given a choice of three dipping sauces: ketchup, mustard and mayonnaise, about what I’d expect really.

One downside to our late dinner was that we missed out on the “House Features” section of the menu and that’s a shame. Gone were choices like egg pappardelle, braised pork shoulder, seared skirt steak, and pan seared halibut. With none of the pizzas sounding that interesting, I went with the bartender’s recommendation, the Ohio Beef Burger. 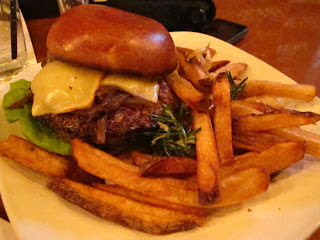 Topped with a grilled onion, port salut cheese, lettuce, tomato and hefty bun, this burger had a good foundation. Taking a bite, I was amazed at just how juicy it was. Actually it was a little ridiculous just how much the burger was dripping, but that big, doughy bun soaked it all up in stride. 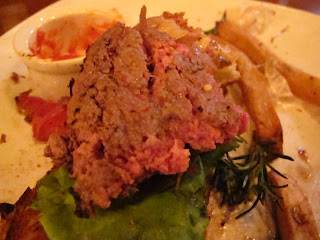 Made with an 80/20 cut of beef, which I can only assume was chuck, I was surprised at how the burger had been seared on just one side. For the time of night, this was a pretty good burger, but it seems like it was missing a few details.

The truth is, under the circumstances, there’s little to complain about when it comes to McNulty’s Bier Markt. Sure, the burger isn’t up to par with Holeman & Finch and the charcuterie isn’t house made, but those are minor inconveniences. The bottom line is there’s a great selection of beer, a damn good take on Pommes Frites and a decent burger, not to mention sliced, cured meats. It may not have been the best, but it was just what Bill and I were looking for that Sunday night.