It was Tuesday, the last full day I would have in Cleveland. Tomorrow, I’d be back on the interstate heading to Louisville, Nashville, and eventually home. I had been to the West Side Market, eaten my fair share of Czuchraj beef jerkey, and had an excellent Dogfish Head beer dinner at Lolita. It had been a short but sweet food tour of Cleveland. Now the only thing left to do was go to the Rock and Roll Hall of Fame. I wasn’t really that interested in the idea of a museum to Rock, but I knew I’d regret skipping it. However before I could go to the hall of fame, I needed to take care of lunch.

Looking to catch up with another fraternity brother, Scott, Bill and I were making the short drive to L’Albatros. Located next to Case Western Reserve University, L’Albatros describes itself as a brasserie and from what I’ve read, does a pretty good job at it. After meeting Scott, we were seated and I got a chance to look at what L’Albatros had to offer.

True to its name there is a decent selection of beers available ranging from the local Great Lakes seasonal to a few lambics. I was disappointed to see the only cider was an English brand, but it’s a small shortcoming. While beer is all well and good, I was much more interested in the appetizer choices on the L’Albatros lunch menu. With a Terrine du Chef, Chicken Liver and Fois Gras Mousseline, and Pork Rillettes standing out, I knew I would have a hard time choosing just one. At the last minute, I made a decision and our appetizers soon appeared. 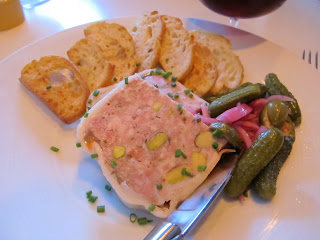 Call me a sucker for a combination of pork and veal. Surrounded by greasy, buttery toast points and cornichons, this was a very pretty terrine. 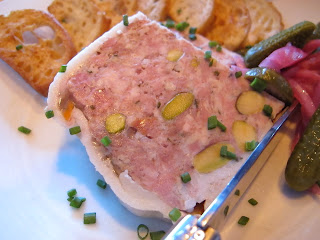 Each piece was smooth, meaty, and extremely pleasant. There wasn’t any particular standout flavor, it was just a well made terrine that was highlighted with pistachios.

I realize that Moules Frites is a hackneyed choice for both a bistro and brasserie, but it really is just a simple and delicious dish….when it’s done well. Hoping that L’Albatros could do the classic justice, I went with an order of the Mussels with Pomme Frites. 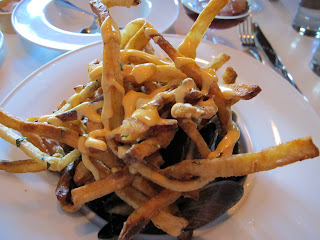 I know the item description said spicy aioli, but I was expecting it to be on the side not drizzled on top of everything. 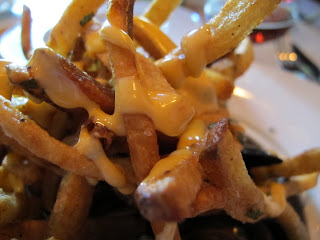 Right away the fries were underwhelming. There was no creamy and crispy texture contrast to indicate double frying. The aioli was also a little odd. It was extremely thick and reeked of raw garlic, a good thing but something I wish I could have metered out at my convenience. 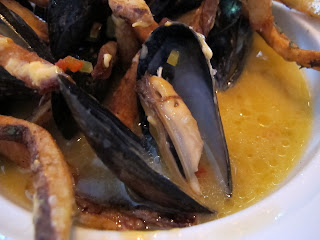 The mussels were actually quite good, but I was little iffy on the aioli falling into the broth. I prefer a more subtle flavor to my mussels, and there was nothing subtle about this combination. Eventually, I was won over and I thoroughly enjoyed the mussels and pommes frites.

It may have been little more than a cursory glance at what L’Albatros had to offer, but I was quite happy with what I received. The terrine, although a little too fatty, was well metered with the liberal application of the extremely tart cornichons. The Mussels did take a little getting used to, but I was quite happy with them, although I still think I would prefer to have the aioli on the side. We may have only scratched the surface of the menu, but it was a lunch of good beer, fine food, and good conversation. After that, there really isn’t much more that you need.