This all started on race weekend. Amidst the racing, grilling and beer fueled shenanigans of the Indy 500, Bill and I began to formulate a plan about him getting a ride to Toledo and me visiting Cleveland. Some five months, 1200 miles, and a wedding later, I was driving through Cleveland on the way to dinner. I didn’t have much planned for my trip except I wanted to try at least one Michael Simon restaurant. As luck would have it, there was a special Dogfish Head beer dinner planned at Lolita to mark the beginning of Cleveland Beer Week. Bill had already made the reservations and I could knock out two birds with one stone. Not only would I get to enjoy dinner at Michael Simon’s Lolita, this would be a beer dinner as well.

This isn’t my first beer dinner, but this is my first one outside of Jackson. The good people behind Sal & Mookie’s do their best to put on a high quality beer dinner, but there’s only so much you can do in one of the worst states for beer variety. I was curious to see how different the two approaches would be.

As soon as we walked into Lolita, I could tell this would be a little different from the beer dinners at home. Within seconds, each of us had a glass of 60 minute IPA in our hands. Drinks secured, it was time to see what sort of hors d’oeuvres everyone was enjoying. 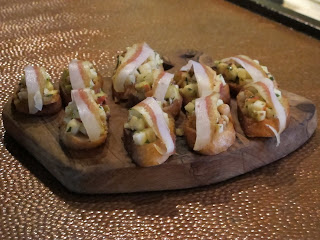 I wasn’t sure what this was at first, it looked like some oddly sliced prosciutto. It turns out this was an apple and lardo bruschetta and it was a deadly combination.

The second option was different but just as captivating. 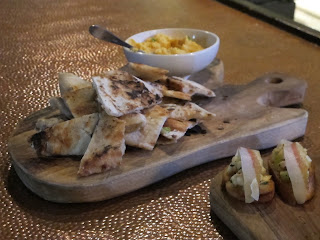 Here a pumpkin, ricotta, and scallion dip was served with sliced, freshly baked flatbread. Through either good fortune or a mistake, our little group ended up right in front of the kitchen. That meant for the first half hour, our glasses were constantly refilled and the finger food never stopped coming. If someone hadn’t told us to go to a table, we would have spent the entire night gorging on lardo, apples, and pumpkin dip.

With Donn Bischell, the Midwest rep for Dogfish Head Beer, providing the background on our beers, we dove headfirst into this dinner with Saison du Buff. 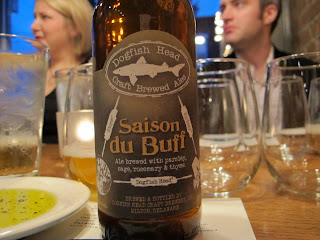 Labeled as a traditional saison brewed with parsley, sage, rosemary, and thyme, the kitchen at Lolita decided to pair it with a pan seared halibut. 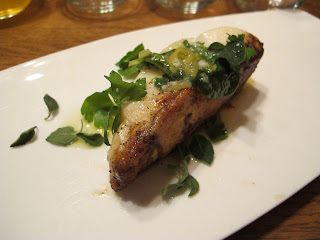 Accompanied by a wilted herb salad and a preserved lemon vinaigrette, this halibut was quite the auspicious first course. 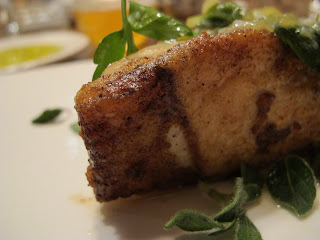 It takes skill to pan sear 30+ pieces of halibut at one time, and this was just beautiful. 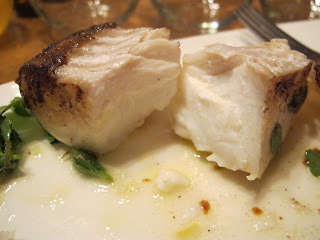 Along with the perfectly cooked fish, the herb salad was a little tart but combined with the lemon vinaigrette, it all worked together seamlessly. 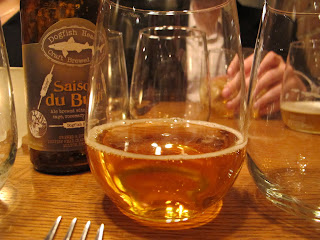 What made the fish even better was all the flavors of the herbs from the Saison du Buff.

The next course started with a fairly elaborate story about the Midas Touch. 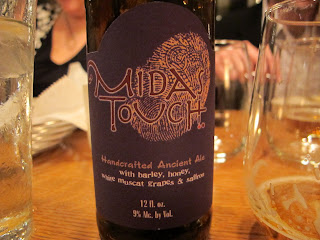 Per Bischell’s story, this recipe was extracted from an urn in King Midas’ tomb. Basing it off a residual sample, they knew the ingredients but not the amounts so this is their best guess. 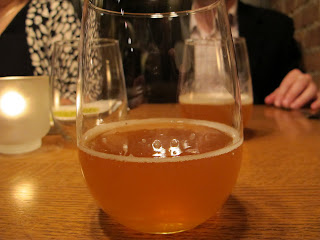 Being close to a mead, it’s no surprise there was a fair amount of sweetness to this beer. 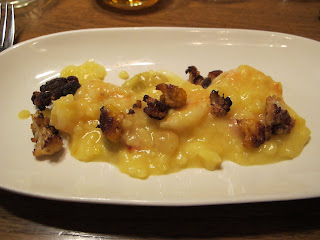 Paired with the Midas Touch was a Risotto of shrimp, saffron, golden raisins, and roasted cauliflower. 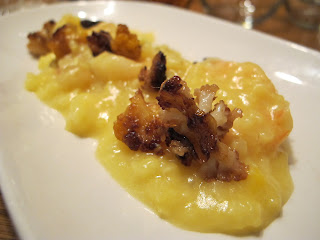 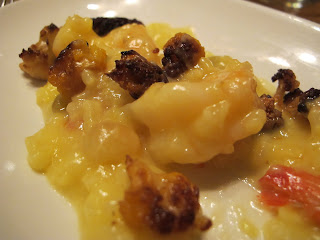 With well cooked shrimp and roasted, almost burnt cauliflower, this was a quality risotto but afterward I was practically begging for something tart.

I wasn’t quite sure what make about the next beer, the Sah’Tea Ale. 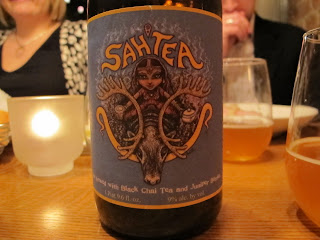 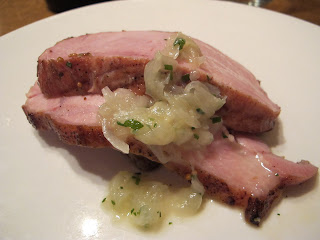 Any worries I might have had about the beer vanished with the introduction of the pork loin. Brined with a juniper brine and served with roasted fingerling potatoes and sous vided cippolini onions, it was the highlight of the meal. 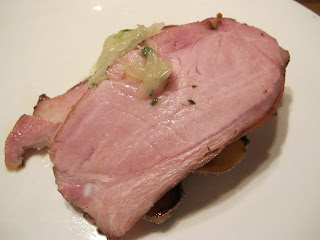 More like a ham steak than a regular pork loin, each piece of the pork loin was deliciously moist, meaty, and ringing with just enough juniper flavor. 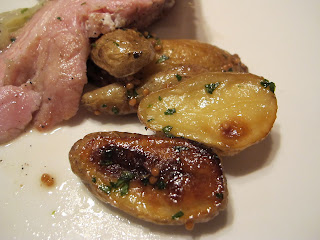 The fingerling potatoes were just as good as the pork. Each one was perfectly roasted with a crisp exterior over a buttery interior. 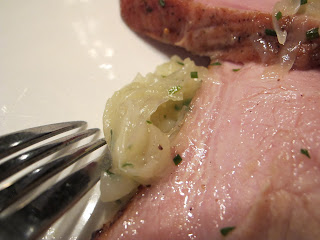 What was unique about the onions is they almost weren’t even there. The cippolinis acted more like a spreadable sauce than a separate component. 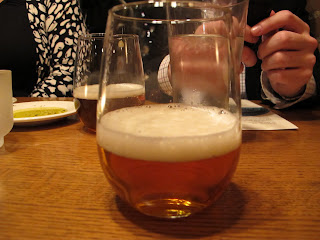 At this point, I just acquiesced to the Sah’Tea beer and found that its juniper flavors played off the pork beautifully.

It may have seemed a little premature but dessert was the next and final course. 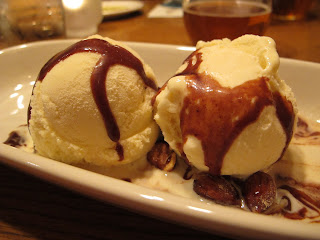 To finish we enjoyed a Theobroma Gelato with spiced hot fudge and smoked almonds along with a Dogfish Head’s Theobroma, a beer made with Aztec cocoa, honey, chilies, and annatto. 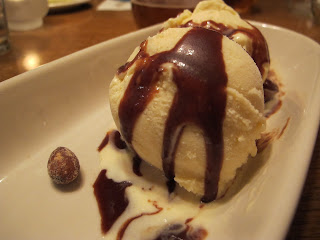 Seeming more like ice cream than gelato, the Theobroma Gelato was still achingly creamy and smooth. Topped with a subtle spicy fudge, it became a truly delicious chocolate ice cream. As usual, the beer provided a unique addition. The Theobroma had a few more chili notes that were only accentuated by the gelato. It really was a case of smoky, spicy, and sweet.

I knew going into this beer dinner that it would be different from the ones at home, but I wasn’t quite ready for what Lolita and Dogfish Head had to offer. Not a single beer at the dinner is available in Mississippi, mostly because all of them were more than 6% alcohol, and a few because of bottle size. Second, I was an immediate fan of the individual portion sizes. Family style is all right, but having your own dish is the superior method. Speaking of having your own dish, if this meal had been served family style, I would have hoarded the whole platter. This was an excellent dinner, especially the Pan Seared Halibut and Pork Loin. So instead of settling for a simple dinner at Lolita, I enjoyed the sterling combination of Lolita and Dogfish Head Ales. That’s not a bad way to experience Cleveland.