The last time I was in Oxford was for Halloween weekend. Auburn, then ranked #1, was playing Ole Miss and despite the next weekend being homecoming, the city was packed to the gills. Looking to beat the crowds, I skipped work on Friday and Alvin, Kate, and I made the short drive to Oxford that morning. Of course that meant we needed plans for lunch and I had just the place. It may have taken four separate tries, but this trip, I was finally going to eat at John Currence’s flagship, City Grocery.

After being shown to our table and going through the motions of drink orders, the first thing to arrive was a serving of the house cornbread. 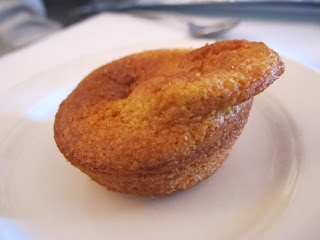 Served warm, this cornbread started off sweet but finished with a smooth pepper laden flourish. It’s far from your average Southern cornbread, but it was delicious.

Enticed by the allure of a daily special, I went with the Quail Tart for an appetizer. 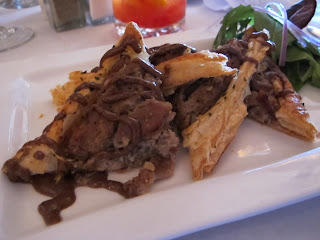 I realize this doesn’t look too appetizing as it’s all varying shades of brown, but there was a lot going on with this plate. 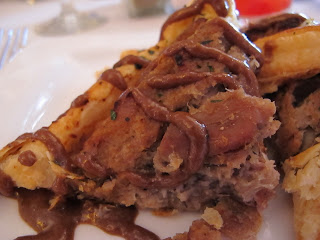 For one thing, they didn’t skimp on the meat. Each bite was full of crisp puff pastry, and bold, meaty quail. Amazingly each piece of quail was perfectly cooked. 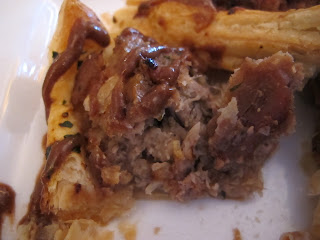 One thing that I was conflicted about was the balsamic apple sauce. At some times it would overpower the quail and everything on the plate; at others its smoky flavor was reminiscent of barbeque. On the whole, this quail tart was peppery, smoky, and frankly fantastic.

Knowing that City Grocery’s Shrimp and Grits were the darling of the food world, my entrée was a forgone conclusion. 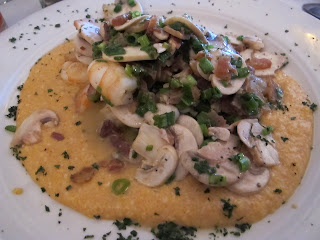 What initially surprised me about this order of shrimp and grits is that it was served on a plate, that and the sheer number of mushrooms. 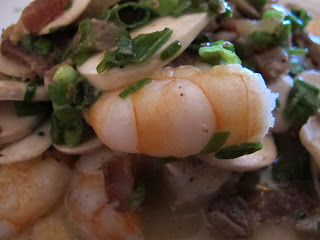 Thankfully, Currence shows off his New Orleans roots as these shrimp were large, juicy, and perfectly cooked. 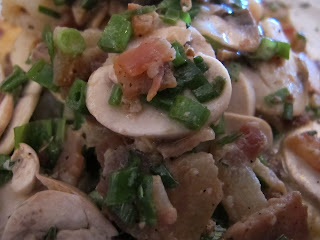 On top of the cheesy, smooth grits was the aforementioned mountain of sliced button mushrooms and numerous small pieces of peppery Texas bacon. Speaking of the bacon, I was disappointed in how each piece of the bacon was chewy and one dimensional. I had hoped there would be more of the deliciously spicy Tabasco cured bacon from Big Bad Breakfast, but this Texas bacon was all pepper. 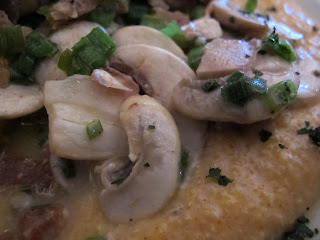 I eventually decided that the mushrooms seemed to slightly mimic the texture of the shrimp. Each one was juicy and buttery but there were still too many. Even with these annoyances, all together, each bite of this dish was a whirlwind of flavors beginning with the cheese of the grits and ending with the pepper and slightly spicy background that leaves you with comforting warmth. Not the best shrimp and grits, but they are certainly above average.

There was one thing that left me particularly conflicted about City Grocery and that was their stinginess with the cornbread. After we finished off our first pieces, I asked for a second round, expecting them to be brought out in a few minutes. Well, with our appetizers long gone and our entrees also bussed away, the cornbread still hadn’t arrived. I thought the waiter had forgotten, but after asking, I was told they had just finished baking a new batch. That’s highly impressive that cornbread is fresh baked, but when I got my order of muffins to go, I was once again disappointed. 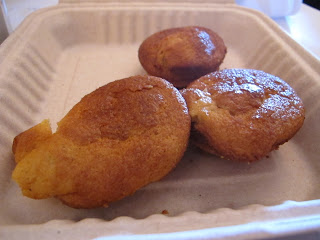 I wasn’t expecting a full tray of muffins, but two muffins per person for the entire meal?

Whenever I get the chance to eat a James Beard award nominee or winning restaurant, there’s always some level of elevated expectation. With City Grocery, I made sure to keep my feet on the ground. I wasn’t expecting culinary gold, and I was quite happy with what we received. The Quail Tart was excellent and the Shrimp and Grits were above average, but I’m not really sure if I’m sold on the excellence of City Grocery. I would like to see how different things are at dinner. At the very least, City Grocery is one of the best if not the best in Oxford.

Things are VERY different at dinner, and it's when Currence's talent shines. The wine list is usually fantastic, the service excellent, and the food is always the star. I've been eating there since '97 and yet to have a bad meal. Get reservations for dinner next time.