Since I was first made aware of the glory that is Star Provisions, I’ve driven past West Egg Café countless times. At first it elicited a chuckle from the Fitzgerald reference, but it quickly slipped into the background and the back of my mind. Moving to the beginning of September, I had arrived in Atlanta and I had breakfast in mind. Being the ever helpful sibling, Jennifer suggested I take a look at West Egg Café. This wouldn’t be just any two bird stone, I could knock out breakfast, look at Perrine’s, and stop at Star Provisions with one short drive; it was decided.

Taking a seat on the porch, I was able to soak up the morning and decide what I wanted for breakfast. With a mixture of fairly unique dishes and breakfast classics, there was one dish that really stuck out to me, the Georgia Benedict. Described as a plate of turkey sausage patties, two eggs, and turkey sausage gravy over a split biscuit with a choice of roasted garlic grits or skillet potatoes, it sounded delicious.

When it arrived at my table, I was a little perplexed at what I saw.

It really was a plate full of varying shades of white.

I figured the best place to start was with the roasted garlic grits. 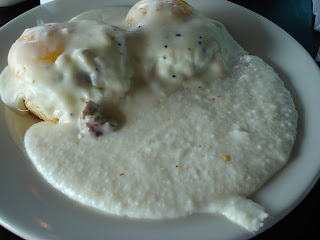 Creamy with a nice, but subtle garlic flavor, I was surprised at just how low key the garlic flavor actually was. Every now and then there was a fiery bite of garlic that lingered, but nothing overwhelming. Actually I thought these grits really needed butter.

Moving to the eggs and turkey sausage gravy, I was pretty happy with the sunny side up eggs. 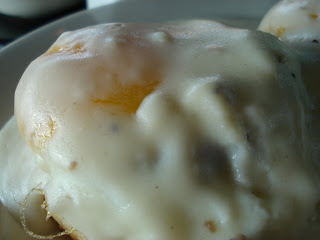 They were just a hair overcooked, but still quite good. As for the gravy, I wasn’t really sure why they called it sausage gravy. When I hear sausage gravy, I conjure up images of a sawmill gravy rife with pieces of breakfast sausage.

Well, there was an errant piece or two, but I was still a little letdown.

I can’t forget the turkey sausage patties and biscuit. 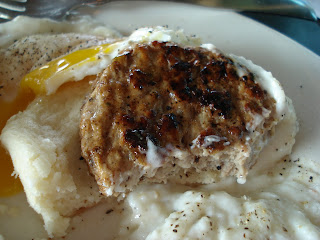 The biscuit was all right, nothing to write home about, but the turkey sausage was a different story. Maybe I’ve lead a life filled with overcooked and desiccated turkey sausage, but this turkey sausage was delicious. Well cooked and extremely juicy, I can see how some people choose this over pork sausage. On second thought, it might make a little sense but they’re still crazy.

While I enjoyed my breakfast at West Egg Café, I can see how there seem to be some consistent complaints about service. Until I tried to pay, my service was excellent, but it then seemed like I was being shunned by every waitress. One thing that did irk me about West Egg was their dish’s nomenclature, why call the dish Georgia Benedict? I can see substituting the biscuit for an English muffin and gravy for Hollandaise, but why a choice of eggs and why Turkey sausage? Maybe I’m making mountains out of molehills. West Egg served up a quality breakfast and after looking at their lunch menu, I’m eager to go back.