Next stop on the search for downtown eats is Miller’s Grill. I can’t say I know much about the history of Miller’s Grill, but judging by the weekday lunch crowd, the place is popular. Once again Carpe Jackson beat me to the punch on Miller’s Grill, but I wanted to see how this griddled and fried lunch tastes firsthand.

I never know where to start with a place like Miller’s Grill. There’s so much to choose from. There’s New York Style Pizza by the slice, plate lunches, burgers, salads and the full bounty of the fryer, but where better to start than with the almighty Cheese Steak? 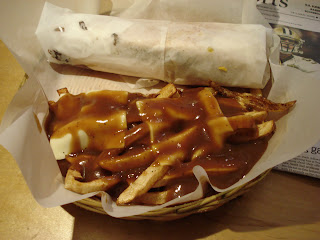 In this instance served with a side of Sloppy Fries, it looked like your typical cardiologist’s nightmare. 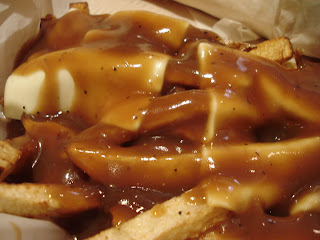 Let’s start with the fries; they’re cut large and left unpeeled. Covered with a relatively beefy gravy and two slices of Swiss that saw three seconds on the griddle, it’s not a bad accompaniment to the cheese steak, it just leaves me wanting. Every time I have something like this, it makes hungry for an order of poutine, something that just doesn’t exist this far south. 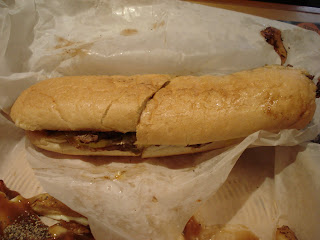 As for the cheese steak, it all starts with that big greasy roll. Of course, the roll is going to be greasy when it’s warmed on the griddle. 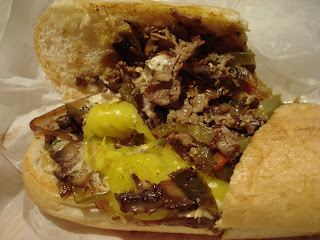 Inside the roll is your usual standard of chopped steak, caramelized onions, and peppers. 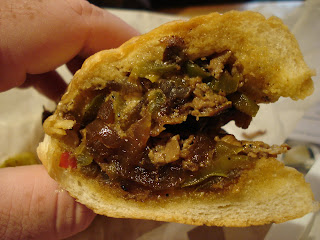 I was actually a little surprised to see red and green peppers and mushrooms as standard on a Philly Cheese Steak. Actually this is pretty far from a proper Philly Cheese Steak, missing are the cherry peppers (replaced by banana peppers), the wiz (replaced with a few disappointing slices of Swiss), and mushrooms are added from the start. Still, it’s hard to find a good cheese steak outside of Pennsylvania so this will have to work. It’s still a beefy, greasy sandwich and that’s what matters. 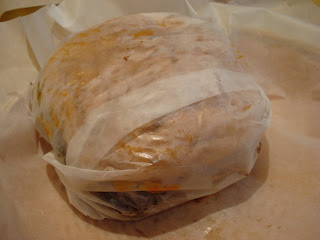 Remembering the sidelined Bacon Cheeseburger Quest, I knew the Phat Burger was on the only way to go and doesn’t it look good and greasy inside that waxed paper? 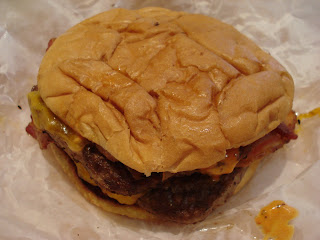 Having been so compacted, it’s not that photogenic. 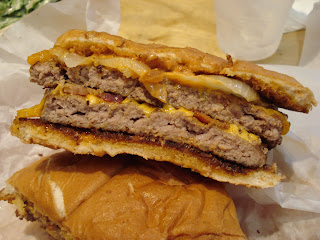 After seeing the burger being made, I had prepared myself for disappointment. I realize going in with low expectations isn’t the best way to start a meal, but when I saw the burgers had been precooked and left to simmer in a steamer tray, I knew there was little hope for this burger. Once the order was made two of the patties were fished from the bath and seared on the griddle. 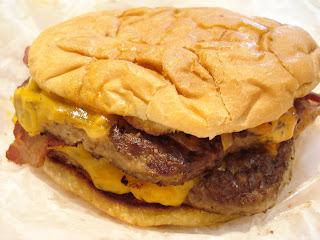 I know that Miller’s Grill does this to save time, but it really ruins the potential for a great burger. Well, the bacon that was all salt didn’t help its chances either, not to mention the missing comeback dressing. Truthfully it’s an ok burger, but it’s disappointing to see the wasted potential for a proper, well cooked griddle burger.

With the Bigg’s Phat Burger failing to live up to its potential, I had high hopes for an order of the Fried Chicken Tender Basket. 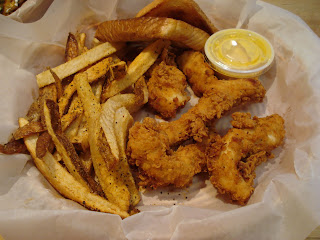 You know what they say about setting yourself up for disappointment? 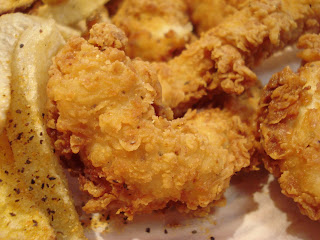 The chicken was crispy. Yep, it was crispy, dry, overcooked, and under seasoned 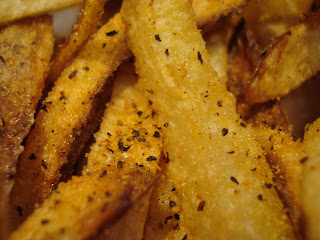 I was curious to see how this fries were when they were unadorned with cheese and gravy. Well, it’s another let down. The fries are too thick, limp, poorly cooked, but topped with a great seasoning.

As with any good downtown eatery, takeout is always a viable option. So for my third look at Miller’s Grill, I ate my lunch out of Styrofoam starting with a Jane’s Club. 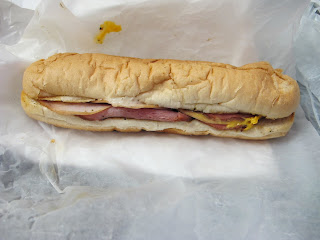 Turkey, ham, bacon and melted cheese on a 9 inch hoagie, it’s a lot of food for the money. 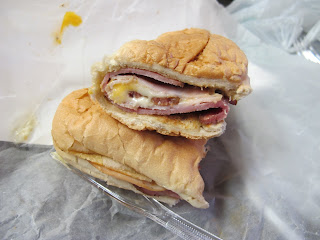 I accidentally ordered mine as just meat and cheese. Oh well, it was still pretty tasty for hot cold cuts and cheese.

It was after the “club” sandwich that I found the real Achilles’ heel of Miller’s Grill…their pizza. With the pizza served by the slice, I had the opportunity to try a fair number of their styles beginning with the Miller’s Meat Market Pizza. 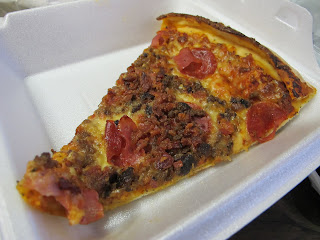 True to the name, there is a lot of pepperoni, ham, bacon, and ground beef on this slice of pizza. 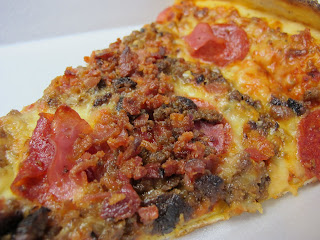 Unfortunately the dough is simply terrible. More akin to cardboard than pizza crust, the pizza isn’t helped by the complete lack of sauce and insipid manufactured cheese.

I had little hope for the next slice, pepperoni. 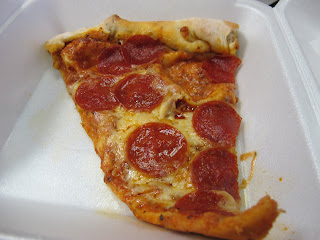 Amazingly, this slice had a better sauce and there actually was a decent amount. Outside of that, it was the same packing material crust and prison grade cheese.

How about a slice of the daily special pizza, the Bacon Double Cheeseburger? 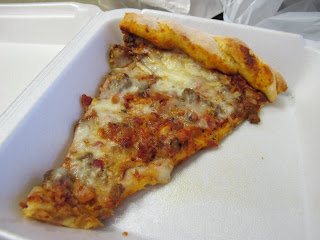 I’ve seen this before in Jackson, at Pizza Shack. With Miller’s version you get ground beef, sautéed onions, mozzarella, Swiss cheese, yellow mustard, and hickory bacon. 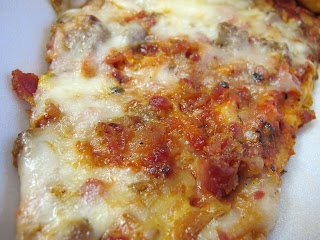 Looks are not deceiving here. It’s another slice that’s been under a heat lamp for too long. Even with that list of burger worthy ingredients, it’s a boring blend of flavors.

Well, after that foray into the Miller’s Grill version of the pizza pie, I can say there’s a good rule of thumb here: stick to the fried or griddled foods. Miller’s Grill isn’t a bad lunch spot. It’s fast, relatively cheap, and staffed with friendly, helpful people. It’s just that a lot of the food is made for speed and quantity, not quality. I hate to say it, but the whole restaurant leave me feeling a little blasé. I’m not really sure what Carpe Jackson saw in the place. I think I’ll keep looking for something better for lunch.

Wow you really ordered poorly. As you stated, get the griddled food, french fries and the special sauce. Pizza was just added a few months ago and is a complete afterthought.

And while I agree with your position that if a restaurant offers a dish, it should be good, the reality of Jackson, Mississippi is that such is rarely the case. You have to practice defensive dining around here. Don't get the steak at the fish house, etc.