Choosing the right place for Chinese food in Atlanta is a daunting task. With chefs constantly shifting locations, old standbys going down in quality, and new hidden restaurants popping up in every strip mall, it’s hard to know where to begin. Even harder is trying to find a specific type of Chinese food, especially if you’re looking for Sichuan cuisine. Maybe I’ve been looking in the wrong places, but I have yet to find the sublime combination of flavor and “ma la” that I enjoyed at Sichuan Cuisine in Houston.

Enter Little Szechuan on Buford Highway. Like so many others, this Chinese restaurant is inconspicuously located in a strip mall, but Little Szechuan carries some weight with its reviews. Creative Loafing approval and ranking from Aol City Search are both very nice, a Zagat rating of “Atlanta Best Kept Secret” is better, but what really caught my attention was the endorsement from Martin Yan. Host of “Yan Can Cook” and master of chicken carving, Yan has ranked Little Szechuan as one of the “Top 100 Best Chinese Restaurants in the U.S.A.” for five years in a row. I don’t know about you, but to me that’s a pretty impressive endorsement.

Looking through Little Szechuan’s menu, I felt spoiled for choice. With more than a hundred dishes and many of them labeled with that inconspicuous little chili, I really wasn’t sure where to start. Thankfully a few minutes of heated discussion eventually led to an order being placed and the first dish arriving soon afterward. 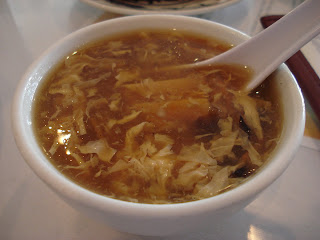 Really more of a complimentary starter than an actual ordered dish, this bowl of Hot & Sour Soup was pretty plain. It seemed like the kitchen took egg drop soup, added some black mushrooms, tofu, and chian king vinegar and called it a day.

The second complimentary starter was a spring roll. 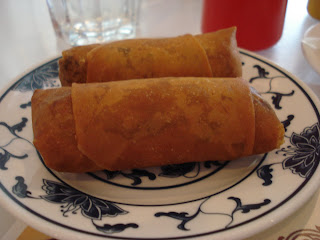 As far as spring rolls go, this one wasn’t too shabby. Neither greasy nor doughy, there just wasn’t much in the way of flavor.

With the soup and spring rolls out of the way, it was time for our ordered food to make an appearance starting with the Steamed Dumplings in Spicy Sauce. 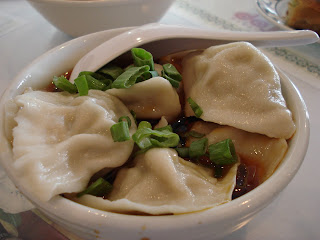 At first all you see is that fat dumpling on top 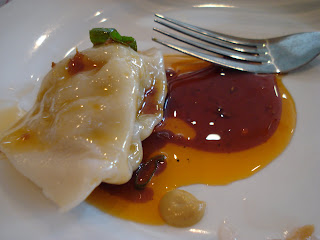 but underneath is a bowlful of that glistening spicy oil. 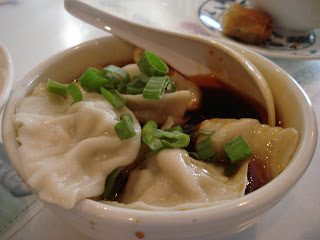 The dumplings were actually quite doughy but there was a big pork filling inside each one. I was surprised at just how sweet the sauce was especially upfront, but after a few minutes I found there was a pleasant lingering heat to accompany the sweetness.

Moving from dumplings to noodles, the King Pao Noodles were next on the table. 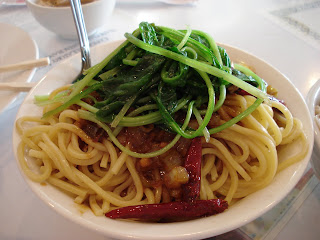 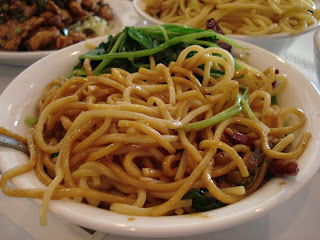 With each bite there was a nice upfront heat that lived up to the Kung Pao name making these noodles a fast favorite. 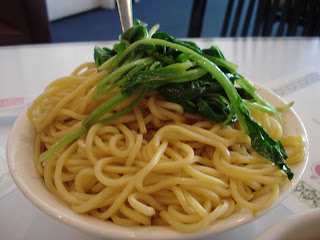 I was a little confused at first. I thought I had been brought a bowl full of noodles without any topping. 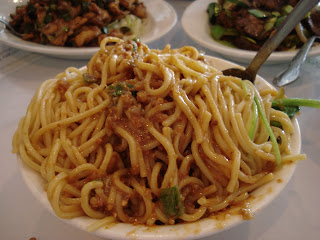 However a quick toss revealed the sauce underneath. This really wasn’t a spicy dish, instead the sauce was predominantly sesame flavored with a hint of sweetness. This wasn’t the Dan Dan Noodles I was hoping for, but I found this to be a simple and quite tasty dish.

There really is something captivating about a dish that centers on tofu, as a result, I can rarely resist when I see Ma Po Tofu on the menu. 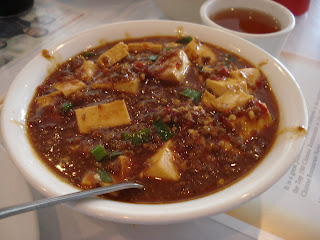 I was surprised to see this version was made with beef and I’m just as curious about the mysterious “Szechuan sauce”. 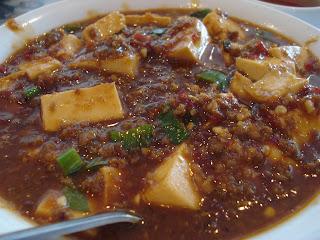 With a strong vinegar flavor, this was unlike any Ma Po Tofu I’ve eaten, but I was a fan, especially for the heat of the dish. There may not have been any of the numbing effects of Sichuan peppercorns, but this was still a quality Ma Po Tofu.

Since I’ve made Cumin Beef from Fuchsia Dunlop’s recipe a number of times, I’m always interested to see how a restaurant might make it differently. 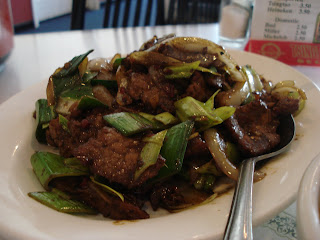 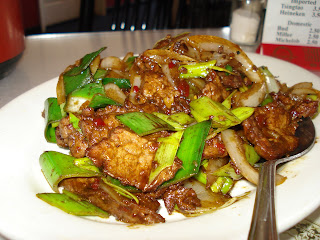 That being said, I was disappointed in the dry beef and how one dimensional this dish was.

Looking to round out the meat selection for the meal, I thought the Szechuan Chicken was a nice choice. 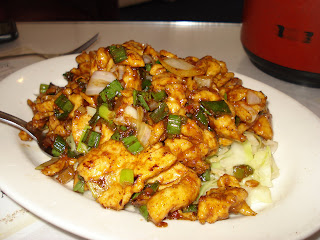 Although this chicken didn’t live up to its cartoon chili warning, I was quite happy with the dish. Each piece of chicken was juicy and well cooked albeit a little greasy. I’m not really sure what they added to the dish to give it the name Szechuan, but I enjoyed the dish regardless of nomenclature.

Walking out of Little Szechuan with plenty of to go boxes, I felt I had only just scratched the surface of Little Szechuan’s giant menu. That being said, I sampled some of my Sichuan favorites and came away a little underwhelmed. Outside of the Ma Po Tofu, there wasn’t any dish that stood out to me. Sure most of the dishes were quite tasty, but the missing ma la is becoming more than a little annoying. I’m also curious about Martin Yan’s “100 Best” rating. With the last endorsement coming in 2008, I wonder if things have changed in the past few years. Regardless, I think my search for Sichuan food in Atlanta will continue.