As much as I enjoy exploring everything Asian and Latin that Buford Highway has to offer, there are times when I want something a little closer, a little more convenient. Sure, it’s fun to antagonize my sister about making the schlep to Honey Pig, but after another drive from Jackson, neither one of us was in the mood. We needed something near to Buckhead, tasty, relatively cheap, and something Asian…..how about Thai? Well, Jennifer had just the place, Little Bangkok.

Tucked into the end of a seedy looking strip mall on Cheshire Bridge, I’ve driven past it countless times and never paid it any attention. With daily specials on a marker board and a menu split between Thai and Chinese, Little Bangkok has a pretty wide selection. Ah, it’s the classic conundrum. There are two very distinct cuisines on the menu but why? What do we order? Does that mean that one is good and other bad or are they both mediocre? Erring on the side of caution, we decided to go with the restaurant’s name and stick to the Thai side of the menu.

That means there was soon a litany of Thai dishes arriving at our table, the first being the Tom Ka (Gai) 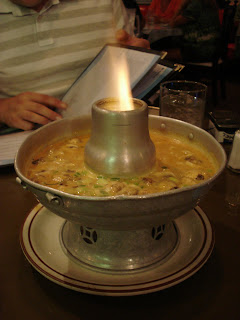 How can you resist a dish that’s served on fire? True to form, this is a delicious soup with the distinct creaminess of coconut milk. 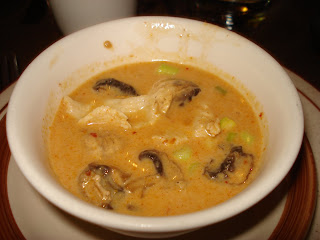 Big mushrooms, a fair number of slightly dry chicken pieces, green onions, and a little lemongrass, I was surprised I couldn’t find any galangal pieces in the soup. Even so, this soup was just a little spicy and extremely satisfying.

One of my favorite dishes at the local Thai restaurant is Nau Num Tok, so when I saw it on the menu at Little Bangkok, it was a must try. 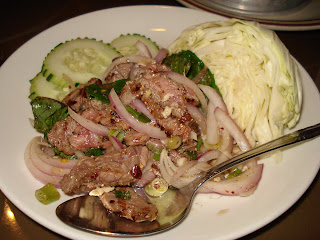 I was surprised to see this dish served as an appetizer, but I was delighted with both the quantity and the quality. The steak was well seared, sliced thin and served rare. With each bite, it was a symphony of beef, pepper, and a lingering spiciness, delicious.

Another odd member of the appetizer list was the Chicken Larb. 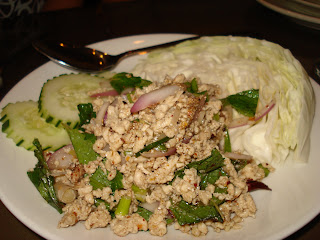 With the round of appetizers over, it was time for the entrees to arrive in force, starting with the Spicy Lamb Special. Listed on the daily special board, I was curious to see how lamb would work with Thai flavors. 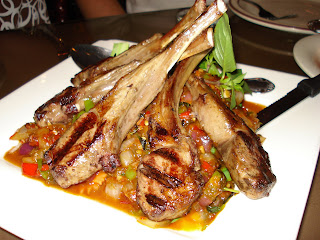 Well, the lamb chops were something else. Juicy, chargrilled, and just a little smoky, there was a great lamb flavor but no heat. It didn’t take long to realize that all the heat and spice was in the sauce below the lamb. Combined the lamb was still pretty good, but it seems like this dish wasn’t very well thought out. The lamb and sauce worked ok together but they seemed like two separate entities and not one cohesive dish.

The next entrée was much more of your classic Thai dish, at least in my mind. Red Curry Beef with potatoes, bamboo shoots, beans, peas, long hot peppers, red bell peppers, and basil. 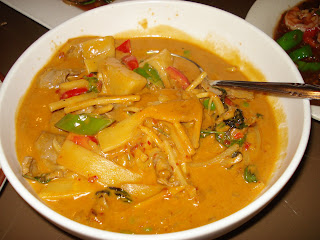 This is the first time I’ve ever had a Thai curry with potatoes and I thought they worked pretty well. 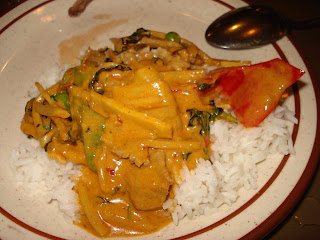 Nothing too spectacular about this dish, it’s a simple red curry but a good one.

Looking for another Thai classic, Aaron suggested we get an order of the Pad Thai. 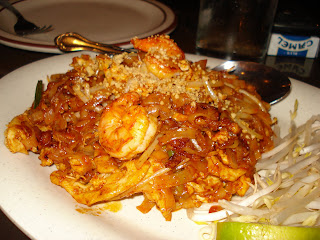 Heavy on the tamarind and not very spicy, this was an average Pad Thai. The chicken and shrimp were well cooked, but it was missing some of my favorite components like tofu, dried shrimp, or an extra kick.

Garlic Shrimp with Hot Sauce, the name just says it all. 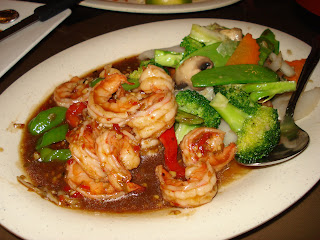 Definitely one of my favorites, the Garlic Shrimp with Hot Sauce pushed all the right buttons. The shrimp were juicy and perfectly cooked. The sauce lived up to its name with a real upfront punch and a lingering heat that left me craving more. It didn’t hurt to see those big pieces of what I think were Serrano peppers littering the plate.

As I said in the beginning, we completely ignored a solid three pages of the menu by sticking to Thai food. From what we tried, my favorite dishes were far and away the Nau Num Tok, Chicken Larb and Garlic Shrimp with Hot Sauce However, I was very pleased with everything Little Bangkok had to offer. It’s a nice little restaurant, the food is reasonably priced, most of the labeled spicy food lives up to its warning, and it was just an enjoyable experience.