It’s hard to judge a restaurant based on one meal, especially breakfast, and extra especially when that restaurant is a German sausage house. Why is that so difficult? Well, for one thing, I have no real idea what a traditional German breakfast is, not to mention, I have no idea what an Americanized/Texan German breakfast is. The closest I’ve eaten would be a Swiss Breakfast, but coming from just outside Geneva, that was probably more French influenced than German. Still, with a name like Kuby’s Sausage House, what did I have to lose?

Scanning the breakfast menu, I was surprised to find some surprisingly generic options. Build your own omelets, biscuits and gravy, pancakes. Sure there was German Toast, which from the description sounded exactly like French Toast. There was also a dish called the King Ludwig, essentially Eggs Benedict with rye bread instead of an english muffin. Looking for something unique to Kuby’s and preferably meaty, the Kasseler Rippchen seemed like the perfect choice. 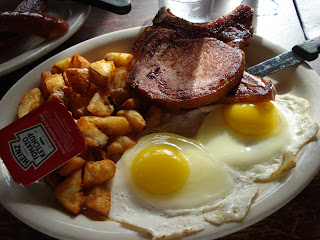 “Our own smoked pork chop served with two eggs, country potatoes or grits, biscuit or toast”, the perfect way to start a Dallas morning. 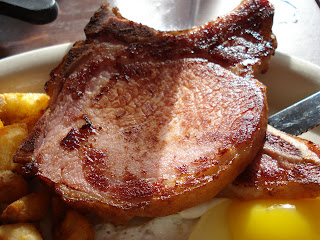 To start the pork chop, a loin chop, had a subtle smokiness and was teetering on the edge of dryness. Thankfully the people at Kuby’s know their pork as this pork chop was just juicy enough and simply delicious.

As for the rest of the plate? 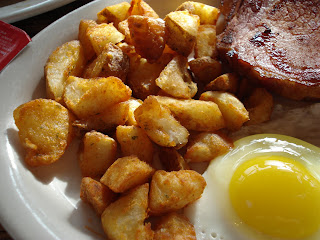 Well, the potatoes seemed to be battered and pan fried and were a great addition to the plate. 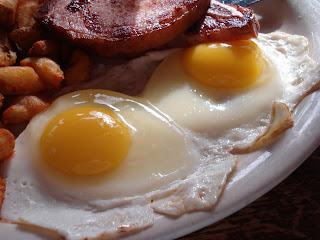 Kuby’s takes the directions for over easy eggs quite seriously.

Just because I thought it would be a waste to go a German Sausage House and not try the sausage, I made sure to get a side order for my Kasseler Rippchen. 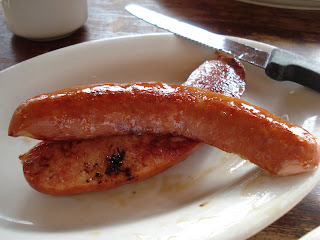 Labeled as just a “smoked sausage”, this was everything a good sausage should be. Juicy, smokey, porky, tasty, this are just some of the adjectives I could use, but what this sausage really needed was mustard. Once again the people at Kuby’s know their products. Even with Breakfast, there was a jar of house mustard on the table and it quickly elevated this sausage to simply delicious.

With a dining room full of German kitsch such as beer steins, cuckoo clocks, and probably an errant pair of lederhosen, the environment at Kuby’s Sausage House is everything you would expect from your friendly, neighborhood German restaurant. However, what really sets Kuby’s apart from the others is the attached market. There, people with Germanic accents will guide you through their selection of sausages, fresh meats, salads, prepared foods, breads, really whatever your little Deutsch heart desires. I already knew that I wanted to return to Kuby’s for lunch or dinner, but now the market at Kuby’s is on my must visit list for Dallas.