It’s hard to resist the temptation of a soup dumpling or xiao long bao. Really just a dumpling made with either extremely gelatinous stock or stock mixed with agar agar/gelatin, there’s just something hugely satisfying about that first bite of a doughy wrapper followed by blisteringly hot liquid and the aftertaste of pork. Unfortunately, soup dumplings remain unavailable in Jackson, but when I was last in Dallas, I was doing a little searching for restaurant ideas and came across Jeng Chi. When I saw Jeng Chi was known for dumplings, especially soup dumplings, I knew exactly where I was going for dinner.

Like so many other Asian restaurants, Jeng Chi is located in a strip mall full of like minded cuisines. What initially sets Jeng Chi apart is the surprising number of baked goods in their entry way. I don’t really associate Chinese cuisine with baked items, but inside the refrigerated cases were cakes and treats for every holiday.

Once seated, it was only a matter of time before I saw the section devoted entirely to dumplings. With more than a dozen dumplings to choose from, I wasn’t really sure where to start, so I decided to follow another table’s lead and start with the Green Onion Pancake. 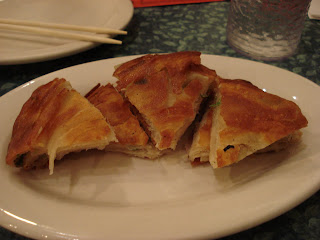 Oddly enough this pancake was featured in the dumpling section. 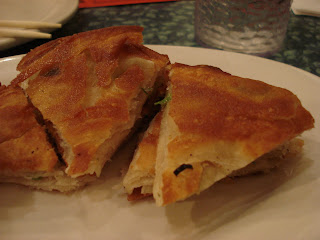 Each wedge was an odd mixture of textures, crispy yet doughy. There was a subtle green onion flavor in the center of each piece, but a highly concentrated flavor on the edges.

Next to arrive was an order of Hot Pot Stickers. 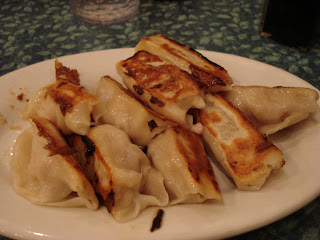 With a thick, doughy skin on the exterior and a succulent pork center, these were your classic, delicious pot stickers. The only odd thing was that they were all poorly folded. Each was open on the ends. 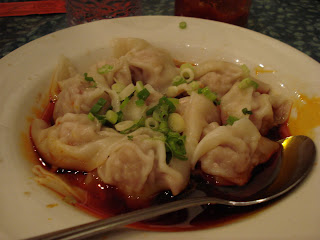 Each wonton had the typical wrapper “wings”, but I was surprised at how mediocre the pork filling was. As for the sauce, it was very sweet in the beginning but with each taste a very distinct heat began to build.

Before I was through sampling the first round of dishes, the Soup Dumplings, or Small Juicy Steamed Dumplings arrived at my table. 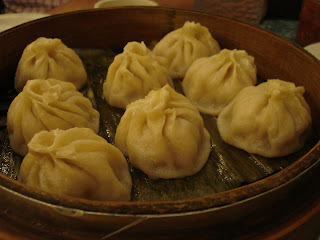 I was surprised to find that the wonton skins were almost dry on the outside, but with that first bite the wave of rich broth and tasty pork filling erased any fears. Even with a doughy wrapper, these were still quite good soup dumplings and well worth the trip.

Like I said, I couldn’t help but order a few Sichuan dishes that I saw on the menu. Almost invariably, the means an order of Ma Po Tofu will make an appearance on my table. 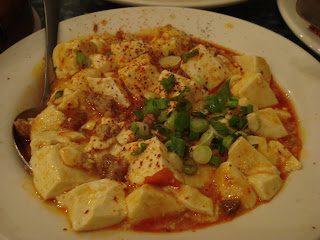 This time was no exception. Complete with the big, silky blocks of tofu, i was surprised at just how much vinegar was in this sauce. Of course, the ever elusive “ma la” of the Sichuan Peppercorn was absent from this dish. In its stead was very little pork and a lingering heat.

Continuing in the ever ridiculous ordering of Sichuan dishes, the Beef with Cumin Sauce was next to appear. 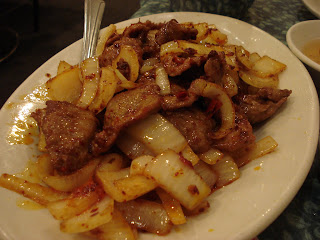 This dish was really just a mess. Instead of delicate slices of beef, there was one huge piece of beef that with slices halfway cut off. It was almost as if the chef ran of out time and couldn’t slice individual pieces off the large cut of beef. 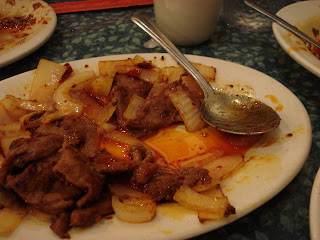 As for the sauce, there was plenty of cumin flavor, but this was really just an oily, spicy dish of beef and onions. Not really what I was hoping for, but still satisfying in its own odd way.

While the Beef with Cumin Sauce may have been oily but still likable, the Eggplant with Garlic & Pork Sauce was an entirely different story. 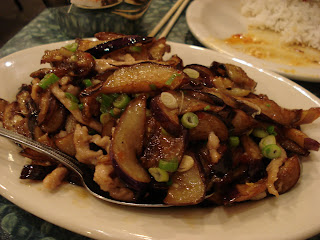 I realize that eggplant has a tendency to soak up oil, but this was just ridiculous. 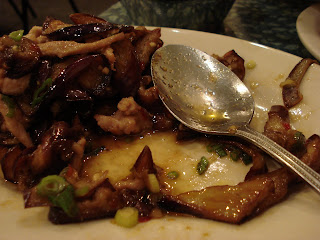 The sauce was sweet and the pork and garlic were all right, but eggplant was tough skinned and brimming with oil.

There are a few lessons to be learned with Jeng Chi. If the restaurant is known for dumplings and specifically Northern and Western Chinese cuisine, don’t go around trying every Sichuan dish. I know this was an error on my part, but I still contend that everything on the menu should be good or else it shouldn’t be on there in the first place. As for Jeng Chi, the soup dumplings were worth the trip and the rest of the dumplings weren’t too shabby either. This was an above average dumpling house and one I’ll make sure to visit again the next time I’m in Dallas.