Situated about an hour on the east side of Dallas, Canton, Texas doesn’t seem like much more than a dot on the map. Known for its first Monday flea markets, Canton has always been a pit stop for me. Whenever the family would load up the suburban and head to Dallas, there would always be a stop in Canton. We formed a comfortable rut in this little town. The stop included the same Shell station and the same incredibly polite register attendant, but we never really stopped at the Dairy Palace. Situated next to the Shell station, the Dairy Palace touted itself as World Famous and proudly advertised their freshly ground beef. With no real memory of Dairy Palace fare, I decided that on this latest trip to Dallas, I would take a look at what Dairy Palace had to offer.

The first thing you notice about the menu at Dairy Palace is the sheer variety that they offer. Not only do they run the gamut of burgers from the diminutive 1/5 lb burger to the garden, salon, catfish, bison and veggie burgers, but there was a section for Super Sandwiches, Mexican Food, Country Breakfasts, Hot Dogs, and Entrees. It really was a taste of Texas fast food cuisine.

Looking to a get a broad sampling of Dairy Palace’s World Famous Hamburgers, I decided to go with a trio of the 1/5 lb burgers starting with the Bacon Burger. 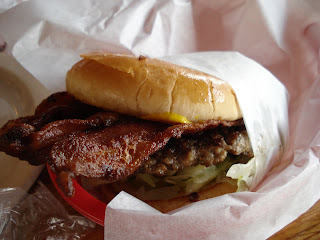 With three big slices of crispy, smoky bacon, the 1/5 lb patty was a complete afterthought with this burger. However even on its own the patty wasn’t that great. It had been griddled to order but not very well. Actually, if it wasn’t for the mustard and pickles providing a foil to the cured pork, this would have passed for a bacon sandwich.

A 1/5 lb Chili Burger was the second in the trio. 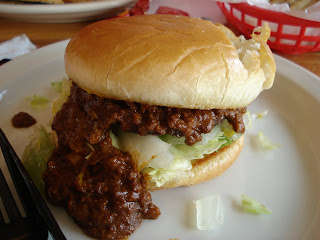 Here, a beefy chili dominated the first of each bite until the mustard and pickles brought up the rear. This wasn’t a particularly spicy chili, but a dynamite burger topping.

Hoping for a little Texas magic with chili peppers, the Jalapeno Burger was the last to arrive. 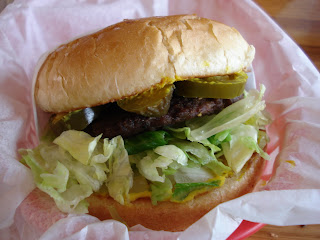 I was disappointed from the start. Instead of the jalapenos being incorporated into the patty, they had been slapped on like an afterthought. 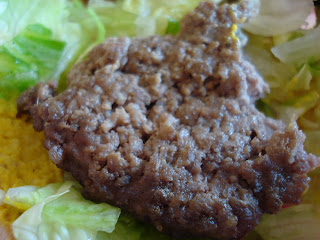 Even with the letdown of the pickled jalapenos, this was still a pretty good patty, but as you can see, not well cooked. It actually looks like it was only cooked, or at least browned on one side.

What better to go with a trio of burgers than a chili cheese dog? 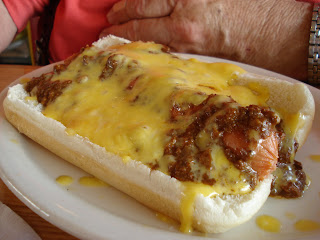 It’s a Foot Long Chili Cheese Dog. A plain jane burger with nacho cheese and decent chili, there's nothing much to see here.

One thing that really caught my eye about the Dairy Palace was the selection of side orders. 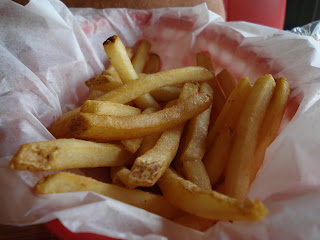 It may have been nine years since 9/11 and seven years since the beginning of the Iraq war, but The Dairy Palace still proudly serves Freedom Fries. This was the first time I actually saw this on a menu, and Freedom Fries are neither crisp nor well salted.

Having come away relatively disappointed from the food at the Dairy Palace, I knew there was one thing that would lighten the mood, ice cream! 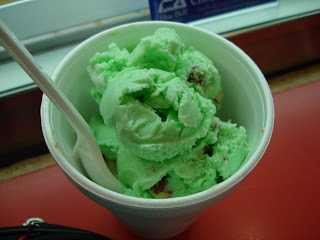 A scoop of pistachio and a scoop of coffee Blue Bell ice cream for the road seemed like a fitting way to begin the trip back to Jackson. As much as I and my family are creatures of habit, there was a good reason that we never made the Dairy Palace a part of our Dallas trips, it just isn’t very good. Being only an hour from Dallas, it’s an easy decision to wait a little while for better food.

I disagree with this customer that posted this i have ate at the Dairy Palace for many years and i have always been very satisified with the food and their service it is the best burgers and varity of foods that i have ever ate. Im sure there are better but i have not found it yet and i have ate at many place in the Dallas and Tyler area....

Wow, if Dairy Palace has the best burgers and variety of food you've ever had, then I just feel sorry for you. I grew up in Canton, and lived there shortly after high school. The DP was a mainstay after almost every sporting event or church function but I can honestly say, even after being completely worn out from playing football and starved from rationing food all day friday prior to a game...Dairy Palace food was hard to stomach even at 1 am on a saturday. The burgers are just nasty chuck folded into a patty with no flavor and carelessly cooked. As for the variety, its nasty. Buffalo burgers? Chicken wraps? I've tried it all, and it all is triple bogey for the course. You can find several burger joints in Canton, Dallas, or Tyler that par the course...and one in Mineola that Aces every hole.