I keep hearing about Tom’s Original Fried Pies. Coworkers have asked me about it, their billboard on I-55 looks impressive and like many times before, Carpe Jackson has beaten me to the punch. Well, it’s been more than six months since she talked about Tom’s, and a lot can change in that time period. I decided to see if the pies were still as good as she made them sound.

Pulling into the empty Tom’s parking lot, I hoped that I had missed the lunch crowd. With no one in sight, I walked in and a waitress appeared from the back. She seemed to be in good spirits, but glad that I was there. Looking around, there was a lengthy menu to take in. 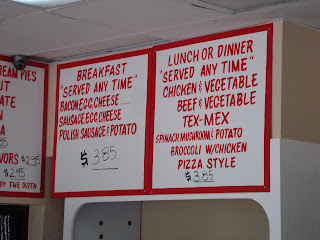 From the breakfast, lunch, and dinner pies. 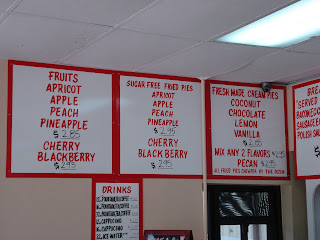 To the sweeter side of fried goodness.

Wanting to get a good sample of what Tom’s had to offer, I rattled off an order the length of my arm. After waiting for the pies to be cooked, I set off for the office with a box full of pies. 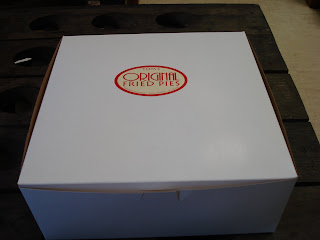 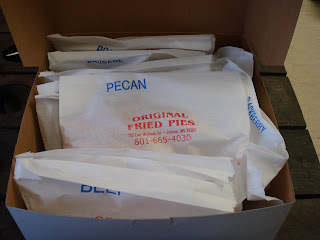 Yep, I got a little carried away.

Well, there’s no point in mucking about. I got to work trying all the pies I had ordered. 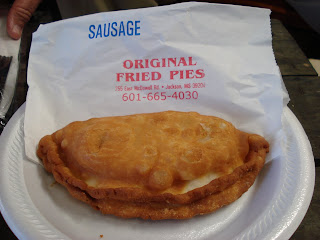 First up was the Sausage, Egg and Cheese breakfast pie. 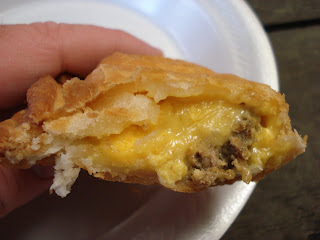 With each bite, you encounter a decadent layer of butter, flaky crust. Inside this pie was a hefty filling of gooey egg and cheese. There didn’t seem to be a lot of sausage, but there was enough to get a taste with each bite.

Next was the Beef and Vegetable Pie. 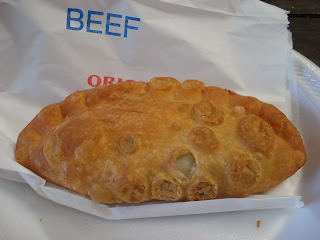 With ground beef in a savory gravy with potatoes, carrots, peas, onion and celery, this sounds like beef stew in a pie. 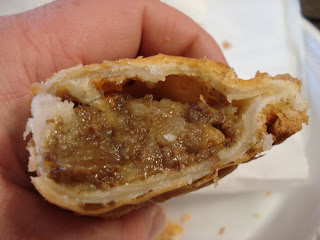 And that’s exactly was it was.

The next savory pie was the Polish Sausage and Potatoe. 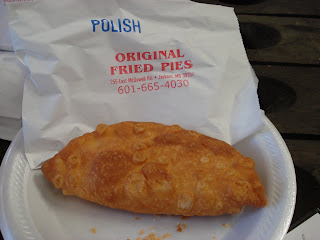 I love a good Polish sausage, but I was a little concerned about the addition of a potatoes and cheese sauce. Without any mention of onions or beer, it just doesn’t seem like a proper Polish sausage. 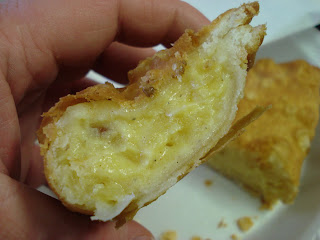 This tasted like potato and cheddar soup, and a good one, but the sausage was quite hard to find. Every few bites, I would taste a bit of Polish sausage and it would add a little needed spice to the soup, but I was still annoyed at the quantity.

The Roagie was a new addition to the menu. 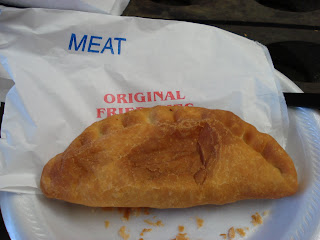 Described as ground beef with garlic and onions, I had a feeling of déjà vu with this pie. 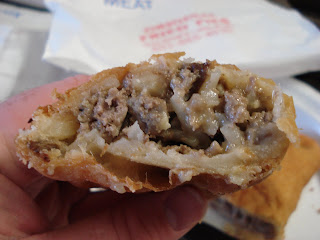 This is a Natchitoches meat pie, no wonder it seemed so familiar. With a beefy flavor and a subtle amount of garlic and onions, this was an excellent pie, but I wish I knew the origin of the name “Roagie”.

Nearing the end of my savory selection of pies, the Pizza Style was the next to face the knife. 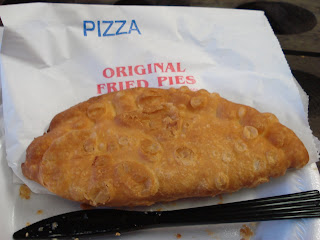 Pizza style sauce with pepperoni and Italian cheeses, I expected this to be like a fried calzone. 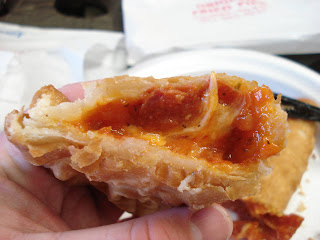 This was the first real messy pie that I encountered. 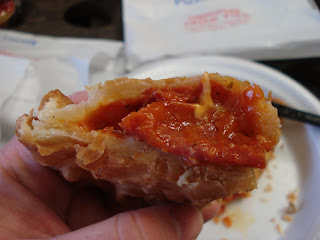 Extremely greasy and with a very simple tomato sauce, this was like a flakey calzone but not a very good one. With subpar sauce and cheese and lackluster pepperoni, this reminded me of square pizza from elementary school.

Rounding out the savory portion was the Chicken and Vegetable Pie. 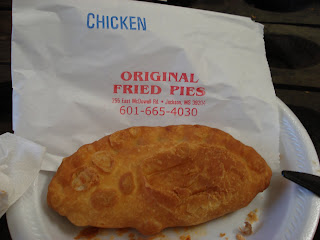 Labeled as diced chicken breast in a cream sauce with potatoes, carrots, onion, and celery, I was ready for my pocket chicken pot pie. 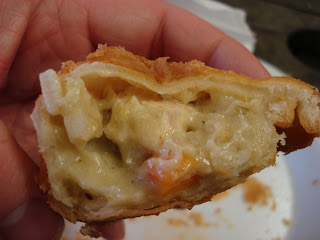 That’s exactly what I got, but it was missing something. I couldn’t figure out what flavor was missing, but with big chunks of tender, moist chicken, this was an excellent pie and a great way to close out that part of the meal.

Since I favor savory over sweet, my selection of fruit and cream pies was nowhere near as thorough. Even so, I think beginning with a Pecan Fried Pie was an excellent choice. 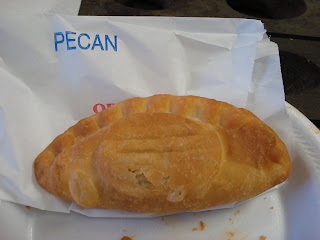 The flaky pie crust worked just as well with the sweet pie. 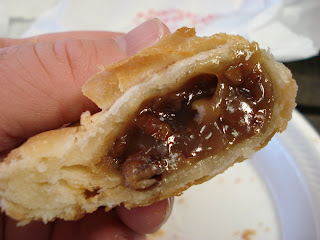 This is essentially your standard pecan pie filling that looks like it was frozen and wrapped in dough. Sweet and sugary with plenty of pecans, it was still a very tasty pie.

At this point, I was ready to throw in the towel. Even doing my best to just sample the pies, I was finished, but I had the urge to try one fruit pie. 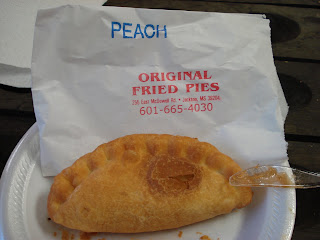 I’m not sure why I went with the Peach Pie. 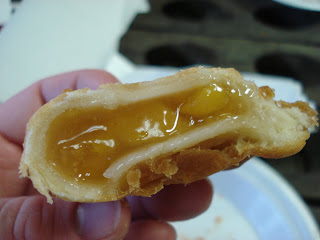 But I’m glad I did. Runny and gooey, this was an onslaught of fresh peach flavor and sugar. This was a truly delicious pie, one of my favorites, and a great way to end my foray into the Tom’s Original Fried Pies menu.

Facing an afternoon food coma, it’s no wonder that there’s been a buzz about Tom’s Original Fried Pies. It’s just a nice restaurant with a very extensive menu. With each pie wrapped in that buttery flaky crust, you know there’s some sort of shortening or lard involved, but you don’t care. I would say my favorites were the Breakfast Sausage, Roagies (Natchitoches/Cajun), and the Pecan Pie, but there wasn’t a real loser to be found.