Having grown bored with what Tuscaloosa has to offer, I’ve taken to stopping in Birmingham for lunch on my ever so frequent trips to Atlanta. While Birmingham is only 50 miles from Tuscaloosa, it does delay my lunch time by quite a bit. As a result, I’m constantly searching for restaurants that are open past 2pm.

Thumbing through Urbanspoon, I found it hard to believe there was only one pho restaurant in Birmingham, so I tried searching for Vietnamese restaurants. My search returned two results, Pho Que Huong and Saigon Noodle House. With a little digging, I found that Saigon wasn’t too far off I-459 and it was open all afternoon; it seems like I found my next lunch spot. If only it were that easy.

Using google maps as my guide, I followed Highway 280 to the Wal-Mart, only to find I had completely overshot the 4606 address. Backtracking, I spent the better part of 20 minutes cursing Birmingham and its lack of visible street addresses. Searching for any sort of clue, I noticed there was a thread on Chowhound that mentioned that Saigon Noodle House was in the Target Shopping Center.

What luck! I was just across the highway from that very shopping center! Navigating through traffic, I pulled into the strip mall and scanned the names for anything Oriental and found bupkis. I kept driving to the back of the center and dead ended with the Target. In desperation, I called Saigon to ask where they were. Head in my hands, I followed the waiter’s directions and found them two stores down from the Best buy, nestled in a corner that I had completely overlooked.

From the outside, Saigon Noodle House looks small and unassuming. Passing through the door, I was surprised to see a very large, very long restaurant that looked like it had just opened. After being shown to a table, I could finally relax and get down to the business of Vietnamese food. Unfortunately, there was a new problem. The menu at Saigon Noodle House is immense. With nearly 100 items, it dwarfs the selection at my local pho joint. Not sure how to proceed, I decided I should go with some of my Vietnamese favorites, my own litmus test. 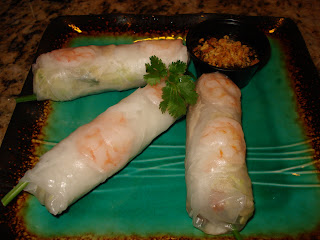 Served with three to an order, I was immediately surprised to see a green stalk, I think it was spinach, sticking out of each spring roll. 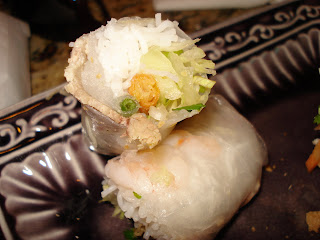 Cutting one in half, I was again surprised to see a tube of fried dough tucked in the middle of the roll. 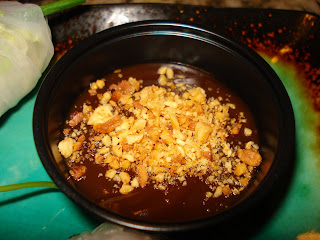 Combined with a dipping sauce of Hoisin and chopped nuts, these were very tasty spring rolls. The pork flavor was subtle but pleasant, whereas the flavor of the shrimp was practically nonexistent. Actually, I couldn’t find the shrimp at all, unless I made a mistake and the shrimp were the fried part in the middle. Even so, I loved the textural contrast of the wrapper, cucumber, noodles and fried bits.

Since regular access to Banh Mis in Jackson is a myth, I went all out for that part of the test and ordered a Pate, Roasted Pork, Vietnamese Ham, & Pork Loaf Banh Mi ( Banh Mi Pate Thit Nguoi). 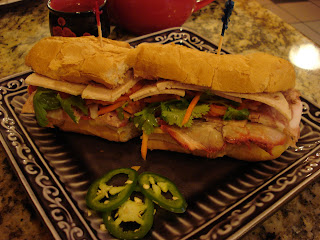 This was a whole mélange of pork flavors, nicely accented by the pickled carrots and cilantro. 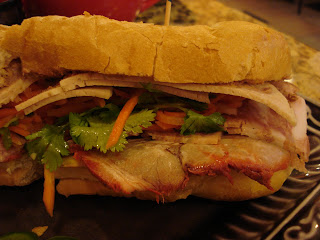 If there was a downside to this carnival of pork, it was that I couldn’t pick out any individual components. 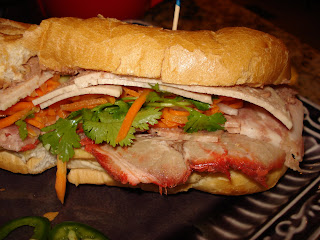 However that was quickly remedied by adding some of the supplied jalapeno slices. That bit of heat broke up the porcine monotony and made it a much more enjoyable sandwich.

The last dish in my litmus test was a bowl of pho, Pho Dac Biet in this instance. 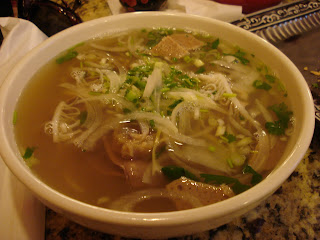 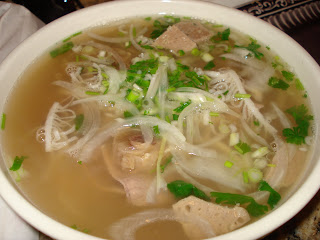 However, there was something wrong with this bowl of Pho Dac Biet. The beef based broth was too light and the flavor was all cilantro and green onion. Where was that beef flavor that pho broth is known for or any of the subtle anise flavor? 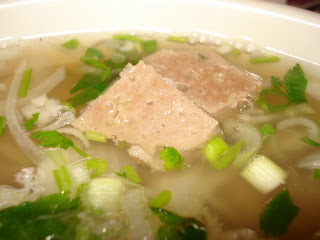 There were some other interesting features besides the lackluster broth, the meatballs had been quartered. 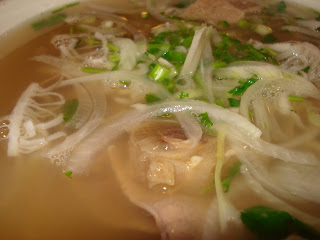 Sliced onions in the pho were also a difference. 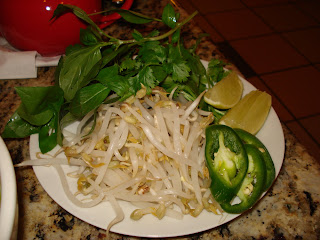 Another difference between here and Pho Que Huong was that Saigon was not at all skimpy on the condiments. I had plenty of cilantro, jalapeno, basil, and bean spouts to choose from. Unfortunately, even with plenty of condiments and liberal doses of fish sauce, sriracha, and hoisin sauce, I just couldn’t enjoy this pho. The broth kept throwing me off and I just stopped trying.

Disappointed in the meal ending pho, I was ready to pay my bill and get back to the highway. However, I noticed that Saigon Noodle House sells Bubble Tea. They may call it Tapioca Pearl Smoothies, but be it called Bubble Tea, Smoothies, or Boba, it’s all delicious. I had to get one to go. 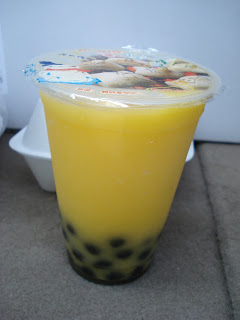 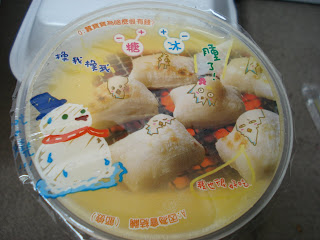 No idea what’s going on there. 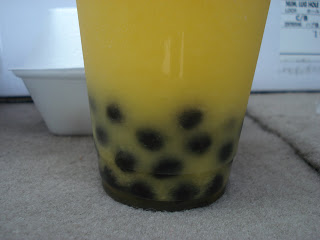 Plenty of pearls in the bottom and this was delicious way to end the meal.

With such an expansive menu, I would be little remiss to write off Saigon Noodle House just because their pho was subpar or because I almost killed myself by choking on a few tapioca pearls. The spring rolls were unique and the banh mi was dressed to the nines and satisfying. Needless to say Saigon Noodle House needs further investigation, but that’s for the next trip.

sorry you didnt have a great experience as I have had. Though I have never tried your Pho (dont eat beef) I usually order the sandwich or the noodle dishes with either prok or shrimp. I hope your next trip turns out better. Oh and I love the chrunch the spring rolls have.

I have to disagree with the Cynical Cook. His name does imply that he is cynical. I found the Cajun Redfish very tasty. The crawfish sauce was as thick as needed. It did not take away from or overpower the flavor of the redfish. It has been excellent every time. Harrell Broome
My Seafood salad was the Best! It has been good every time. The fried oysters were great. Jackie Broome

Thanks for reading and thanks for your comments on this post. While I was let down by the pho, I enjoyed everything else at Saigon Noodle House. Maybe next time I can try soe of the bun dishes you're talking about.

>Anonymous or Harrell & Jackie Broome
-I'm glad to hear you enjoyed the Cajun Redfish at AJ's on the Lake. I just think otherwise. However I'm not sure why you commented about AJ's on the Lake on the Saigon Noodle House review.