An izakaya always seemed like an excellent choice for dinner, but there are times the drive from Buckhead to Shoya Izakaya can get a little annoying. Looking for something new, my sister suggested Miso Izakaya in Inman Park. That name seemed familiar and I vaguely remembered receiving an email from them last summer. It seems like there was some negative feedback when they first opened and they subsequently changed the menu. Well, I may be a year or so late, but I finally got around to checking out Miso Izakaya.

I’ll spare you the details about the architecture and décor, but Miso Izakaya takes a much different approach than Shoya Izakaya, maybe a little more modern. As fun as interior design is, I find food much more interesting. So to ease past the décor, the harumaki was the first dish to our table. 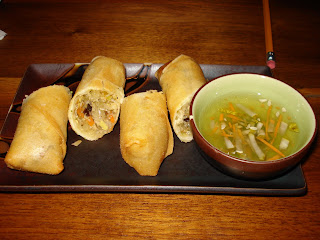 These spring rolls were an excellent start to the meal. 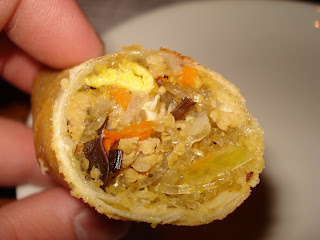 Well fried and full of a peppery, pork filling, I was also a fan of the yuzu lemon dipping sauce. Unlike a lot of soy based sauces, the yuzu lemon sauce seemed to lighten the spring roll and really brighten the flavors.

Next in line was an order of gyoza. 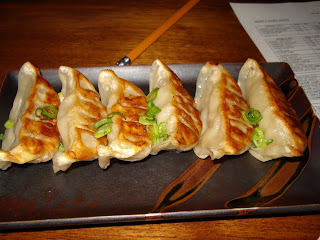 Served pan-fried and with a sesame soy sauce, this was a relatively simple dish but extremely satisfying. 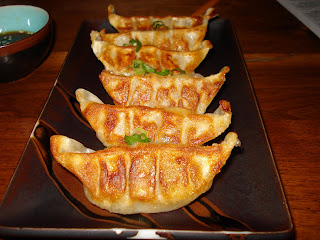 With the next dish, my sister let me know I was on my own. Apparently the idea of a soft boiled soy egg just doesn’t appeal to her. 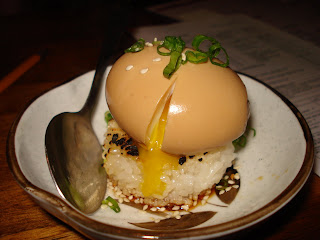 I’ll admit this is not a dish for the egg haters, but I really enjoyed this plate. The egg had that subtle soy flavor and the runny yolk was delicious with the char grilled rice.

Moving to a dish that we both would enjoy, I went with the Blissful Glutton’s suggestion and ordered a Tonkatsu sandwich. 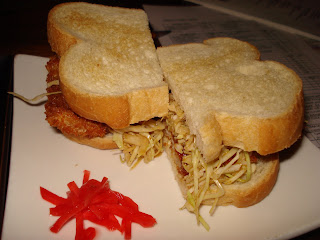 Not at all greasy, the panko covered pork tenderloin was well paired to the Tonkatsu sauce and sake slaw. 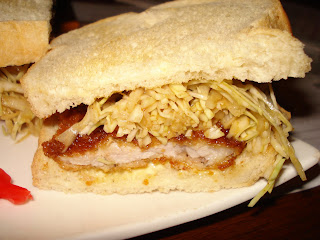 I also really enjoyed the fact this was served on plain white bread, no idea why.

Going back to something a little more familiar, I asked for an order of the Hamachi Kama. 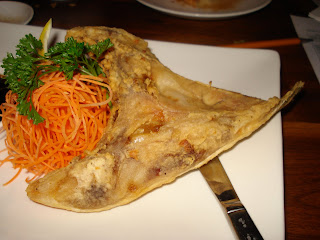 As far as I can remember this is my first time having it fried and I was a little disappointed. Without the seasoned salt and slight smokiness and char from grilling, I felt something was missing. Still, with the supplied ponzu, this was a nice collar albeit an incomplete one.

One item on the menu that really stuck out to me was the Japodog. 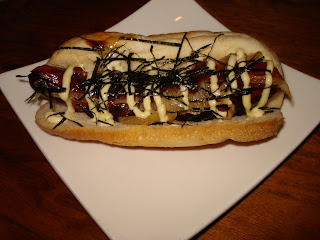 It doesn’t seem like it would work. A hot dog topped with mayonnaise, seafood, and onions just seems wrong. 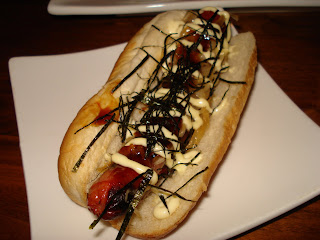 All that is forgotten once you experience the crisp snap of the casing, the creaminess of the mayo and seemingly subtle accents of the onions and seaweed. It might be messy and a little odd, but I’m a fan of this slightly eccentric dish.

Through all the blog reviews of Miso Izakaya, there seems to be one constant, the buns are awesome, the crispy duck bun in particular. 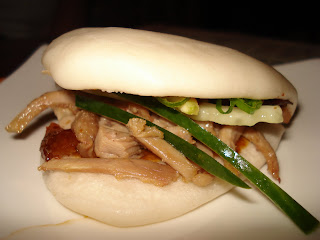 It’s like preaching to the choir. The bun is pillow soft and it contains a rich, crunchy duck stuffing. I would probably go back just for this.

Sharing an affinity for dumplings, we knew the fried gyoza wouldn’t be enough, so my sister asked for an order of shrimp shumai. 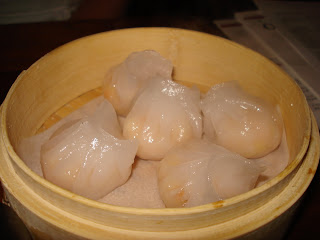 Feeling the need to end with some over the top dish, the Galbi Ssam seemed to fit the bill perfectly. 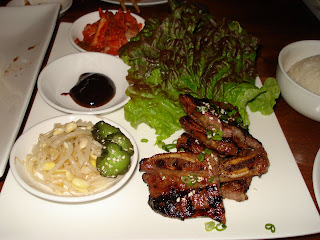 Up until this point, everything with the exception of the Japodog had been relatively neat. 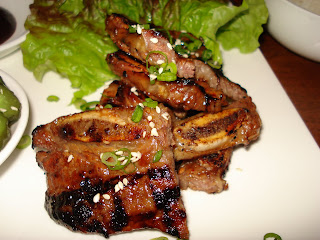 The galbi was tender and a great starting point for the wrap. 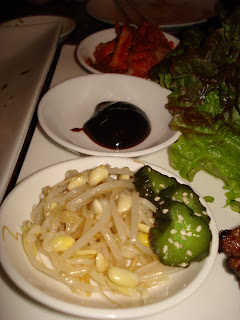 The choices for the wrap provided for a nice variety, but every time I had bean sprouts, kimchee, or sauce spilling everywhere, but in a good way.

When the check was presented, the was a simple dessert along with it. 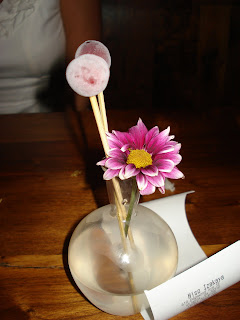 We may have only scratched the surface on what Miso Izakaya has to offer, but I walked away extremely satisfied with what we had ordered. There were some real standouts, namely the Japodog, Crispy Duck Bun, and the Soft Boiled Soy Egg, but even the lesser dishes were up to par. I wouldn’t hesitate to return to Miso Izakaya and see how the rest of their buns stack up.