I rarely have any interest in buffets, particularly country buffets. I really don’t see the appeal. Unfortunately, is rife with them. While technically not in , one of the biggest names in the business is Mama Hamil’s in . Once a small shack on Highway 51, Mama Hamil’s has grown to occupy a giant facility.

I’ve had Hamil’s on my to-visit list for some while, but I knew I needed someone in tow. I have no problem eating a solitary meal, but it seems a bit odd at a country style buffet. Luckily, Kate was interested in lunch and I conned her into going with me to Hamil’s.

It’s been nearly a decade since I paid a visit to Hamil’s. I don’t really remember anything about the food, but I enjoyed the charm of the rickety looking shack and the seemingly genuine kitchiness of the décor. Apparently I should have paid more attention to what was happening on 51. While the shack is still there, the operation at Hamil’s has moved farther away from the road to a giant facility that I suppose looks like a barn.

One thing I can say offhand about Hamil’s is that it is popular. Pulling into the parking lot, there were people overflowing from the lot and filling the adjacent field. Inside, the wait was short but there was a constant line to the buffet. An open rectangle of shimmering stainless steel, the buffet at Hamil’s held every southern/country favorite.

Faced with such a bounty of choices, I soon ended up with an overflowing plate. Thankfully, Kate had already scouted out a table, so it was a short walk with my loaded plate. 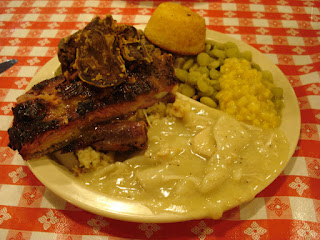 There’s more than meets the eye with this plate. Not only is there ribs, chicken & dumplings, fried chicken livers, corn, butter beans, black eyed peas, and cornbread on there, there’s also a spoonful of dressing.

First up for the sampling was the chicken and dumplings 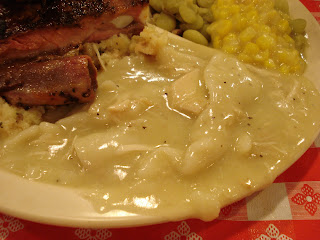 While this was on the soupy side, it was a tasty start to the meal but only because the sum was more than its parts. The dumplings were a mixed bag, some pillowy soft, the others tasted like big chunks of uncooked dough. One thing that was consistent was the chicken. It was all stringy and overcooked.

How about creamed corn? 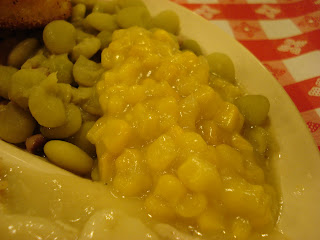 This was beginning of an annoying trend at Hamil’s, this corn was simply too sweet.

Did the butterbeans suffer the same fate? 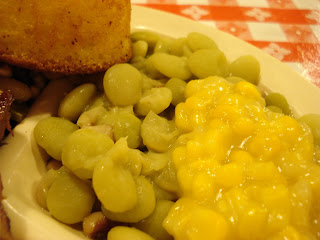 Yes, they did. These were pretty decent butterbeans, but they had been doused in sugar, corn syrup, or something else too sweet for butterbeans.

Well, the trend took a hit with the black eyed peas. 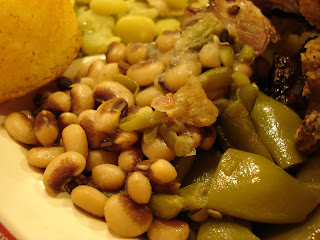 Not at all sweet, these peas were simply terrible. I couldn’t tell if they were that chalky from being overcooked to death or not cooked at all.

The green beans were another exemption from the overbearing sweetness of Hamil’s. 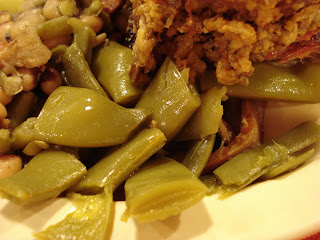 While the beans were big and peppery and served with pork, albeit overcooked pork, they had the distinct tinny taste of canned beans.

Moving on to the dressing, the trend towards annoying sweetness resumed. 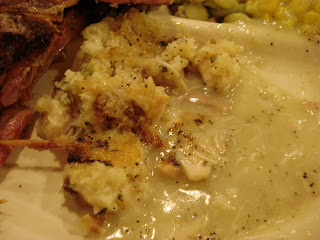 Unfortunately, this spoonful of dressing had been crushed by ribs. Nevertheless, the sweetness wasn’t overbearing here. There was actually a pleasant pepperiness to the dressing and plenty of big pieces of chicken meat to boot.

If one was to believe this amusing painting on the tractor out front, 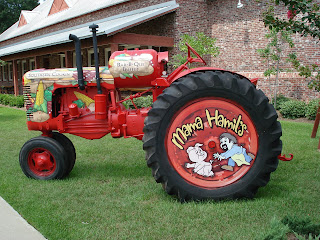 One would think Hamil’s wants to be known for their pork. Surprisingly there wasn’t a lot of pork on the buffet, aside from the ribs. 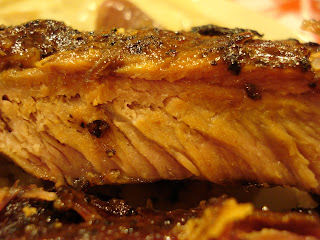 Things were looking good from the start, there’s a definite Hickory smoke ring, and full evidence of a rub, although an overly sweet but nicely peppery one. 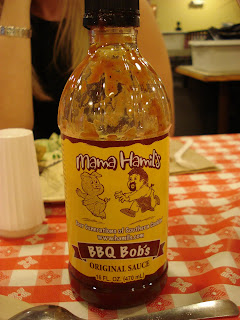 Being the southeast, you can’t have bbq without sauce, and Hamil’s had their own. 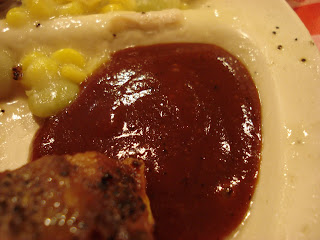 It’s your standard bbq combination, tomato, vinegar, pepper, but it actually works quite well with the ribs. Even though it’s a cheap shortcut to use caramel color and liquid smoke in your sauce, the Hamil’s bbq sauce works well with their style ribs.

What about those fried chicken livers? 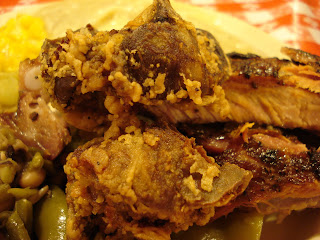 Chalk these up as another death by steamer tray.

It doesn’t seem right to visit a southern/country style buffet and not try a piece of their fried chicken. 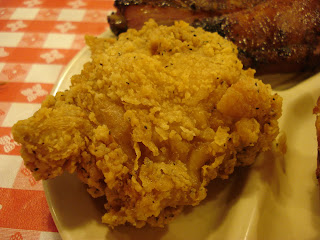 Greasy, but relatively moist inside, this chicken had a few virtues. The skin was peppery and well seasoned even with that Hamil’s heavy handedness when it comes to sweeteners. Regardless, it still doesn’t hold a candle to Mr. D’s chicken at the Lorman Country Store.

Just as fried chicken is an integral part of any buffet, cornbread plays just as vital a role. The cornbread at Hamil’s has a nice texture, but it is just too sweet, even for Northern style cornbread.

So what can I say about Hamil’s? As I said in the beginning, I really don’t see the appeal. Nearly everything was too sweet, the meats were subpar and what they had going for them had been left in the water of the steamer tray, and the charm of the original has been lost. I arrived at Hamil’s wondering why it had been so long between visits. When I left, I had a pretty clear idea why. I suppose it’s up to time to see if it takes me another 10 years to visit again.

I agree. What is the big deal about this place. Food is not great and the place is so noisy you can't hold a conversation.