I’ve had my eye on the Iberian Pig for quite some time. The premise sounds great, a Spanish style restaurant with a heavy porcine influence specializing in Jamon Iberico. However, the fact that Decatur is a solid drive from Buckhead and that I don’t live in Atlanta has kept me from visiting the Iberian Pig. Well, the last time I was in town, Aaron, Jennifer and I rectified that situation.

With a rather extensive menu, it’s hard to know where to begin at the Iberian Pig. However, it only seems natural to start with a few selections from the Charcuteria section of the menu. 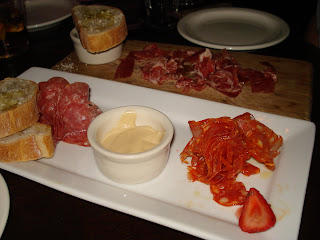 Starting with the background, there’s the Jamon Iberico, then chorizo “Palacios” on the right , and salchichon on the left. 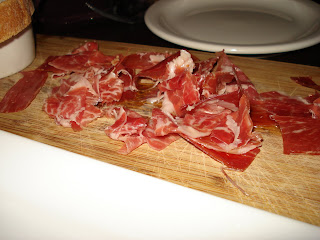 Jamon Iberico has more than its fair share of hype and while the meat doesn’t cause any life changing experiences, it is a delicious cured meat. Drizzled with olive oil, it’s nutty and hugely satisfying. 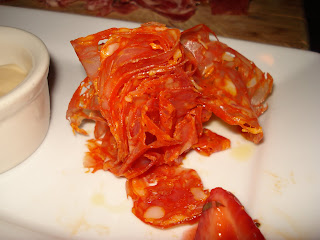 The Chorizo “Palacios” was another excellent piece of charcuterie. With a prominent paprika flavor, it was delicious with the supplied mustard 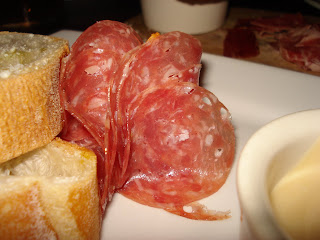 The last of the trio was the Salchichon and it was by far the most subtle. There didn’t seem to be much more to the flavor than pork and pepper. That’s not a bad thing, it just didn’t’ seem to stand up to the forward flavors of the other two meats. Of course, the annoying part about the charcuterie plate was the tiny amount of bread. If you have three people and a fair amount of meat, the plate should come with more than three slices of bread.

Moving to the Tapas section of the menu, we started with the Croquetas de Queso. 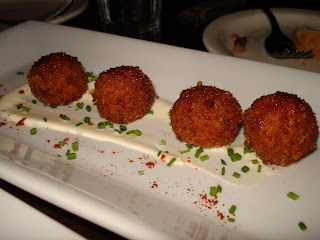 Essentially a dish of fried goat cheese over yogurt and honey, this was a very nice plate. The croquette was well fried and the tart of the goat cheese was well complimented by the yogurt.

The second Tapas plate, the Pork Cheek Tacos, seemed like a must order. 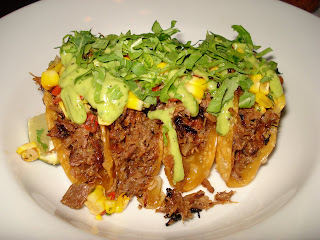 Truthfully, I only ordered this because I read Pork Cheeks, but when I saw that it was Slow Roasted Pork Cheeks, fire roasted corn salsa, avocado crema, arugula, and fresh lime, I was a little skeptical. 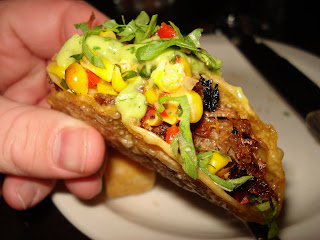 Inside this wonderfully crispy taco shells was a sea of flavors, but the pork was nowhere to be found. Without the necessary amount of salt, nothing really stood out with these tacos. It really seems like a waste of pork cheeks.

Continuing with the pork tapas dishes, an order of Albondigas was next to arrive. 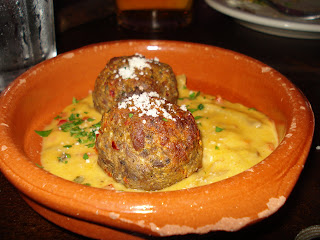 Wild boar sausage stuffed with piquillo peppers, Macedonian dates, and roasted tomatoes, there were a lot of flavors at work in these meatballs. Unfortunately these meatballs were dry, dense, and all I could taste was breading and spice. Even with a very nice sauce of pimento crème and oyster mushrooms, I couldn’t help looking for the missing Wild boar flavor.

Looking to explore some of the other meats in the Tapas section of the menu, we put in for an order of the Calamares, baked calamari, stuffed with grilled vegetables, Mahon cheese, and tomato-basil sauce. 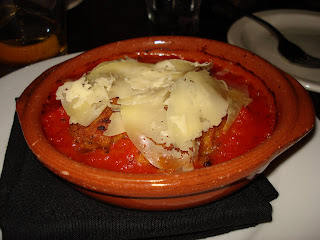 This had a great presentation but a completely underwhelming delivery. The calamari was overcooked but not that rubbery, it was just not a good dish at all.

Going for another non-pork dish, the Braised Veal Shank Ravioli was our next dish. 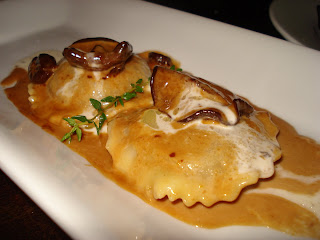 Handmade ravioli, stuffed with slow braised veal shank and served with a Rioja-cream sauce, black truffle crème fraîche, white truffle oil, roasted shitake mushrooms and fresh thyme, it all seems over the top, but the ravioli was excellent. In retrospect, I wonder if that’s because the calamari was so poor that the ravioli was only good by comparison. 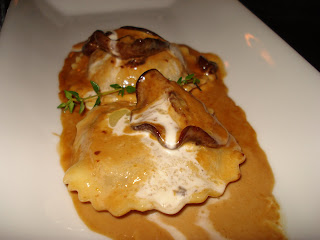 It seems odd but even with so many things going on in the sauce; this sauce didn’t seem very well developed. There was just a strong and unpleasant alcohol taste throughout.

Hoping to end on a high note, I thought the Salchicha 3-ways would be just what we needed. It seemed like a great idea. With Chorizo with muscatel wine reduction and romesco, a lamb sausage with macerated cherries and cherry balsamic, and a fennel sausage with caramelized onions and vin cotto, it seemed like a busy plate but one with real potential. 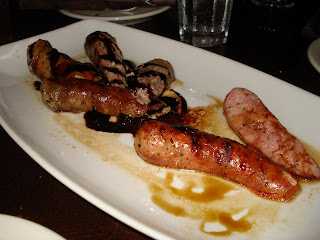 Quite frankly, this plate looks like a real mess and is completely unappealing. 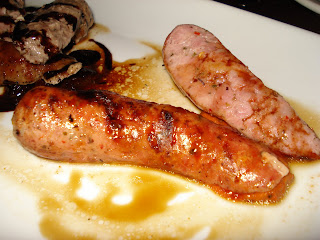 The chorizo was the first on the plate and actually the best, but that’s not saying anything. There wasn’t much chorizo flavor to this sausage, but there was a good snap to the casing and the wine reduction was a nice compliment. 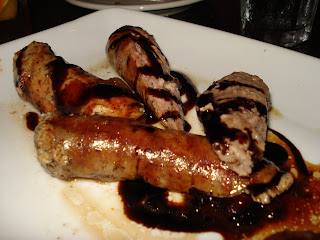 The other two sausages were a waste of time. The middle sausage, the lamb, was just poor all around. No snap to the casing, no good flavor to the sausage, a boring sauce, this was just bland and bad. The fennel sausage was just a plain Italian sausage. A little fennel, maybe a few chili flakes, this was supermarket fare.

I know that The Iberian Pig has gotten mixed reviews, but I have high hopes for any pork centric restaurants. I had especially high hopes for the Pig when I was told that this was owned and managed by the same people as Sugo. I had a pretty pleasant meal at Sugo and I was expecting much the same here. However this meal had a strong start but after the Croquetas de Queso, this was just a litany of one disappointing dish after another. As odd as it sounds, the best part of the meal was the charcuterie, or the meats that The Iberian Pig just sliced and put on a plate.