Whenever I find myself in Atlanta, I always feel spoiled for choices. With the bounty of Buford Highway, the recent pizza and burger wars, and the litany of high quality new Southern cuisine, there’s enough in Atlanta to keep me exploring for months. However, I rarely think of Atlanta and good bbq. With that being said, I’ve been fascinated by what Fox Bros Bar-B-Q has to offer. It seems like everyday their twitter feed announces new and delicious sounding offerings: chicken fried steak, bbq short ribs, burnt ends and brisket meatloaf, fried ribs, smoked corned beef, not your standard bbq shack fare.

So after a stop at one of Atlanta’s many farmer’s markets, Jennifer, Aaron and I were trying to decide on lunch. Dim sum was suggested but Aaron declined, some random brunch place was suggested and that too was shot down, but then someone suggested Fox Bros. With everyone happy with that decision, it was just a matter of making our way to Dekalb Ave.

I generally don’t care about the décor or appearance of a bbq restaurant. More often than not, it’s the little shacks that produce the best bbq. Thankfully there’s a distinct smokiness to the air once you near Fox Brothers, and the sight of a number of smoker chimneys pouring out hickory smoke is always a welcome view.

Once inside, I was disappointed to find that the smoked corned beef is a Friday special. At least, Fox Brothers sticks with one bbq sauce. 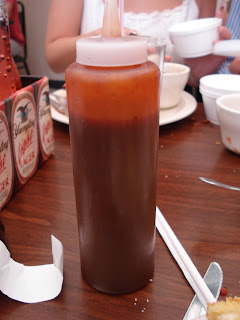 Going to a bbq joint and finding multiple sauces to choose from is a pet peeve of mine, especially when a restaurant tries to label them at Memphis Style, Kansas City, Carolina, etc. At Fox Brothers, it’s one sauce for everything and I like it that way.

Looking to start our meal the right way, we ordered The Lopez. 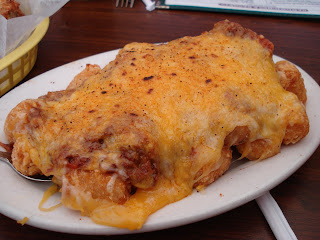 Tater tots smothered in brisket chili and cheese, it’s hard to believe this is a half order. 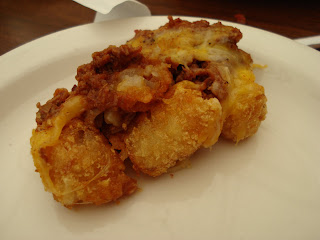 This was my first taste of Fox Brother’s brisket chili and I was pretty impressed, I just wasn’t a fan of this dish. I have nothing against The Lopez, I just don’t like tater tots smothered in cheese.

I was more interested in one of the appetizer specials, the fried ribs. 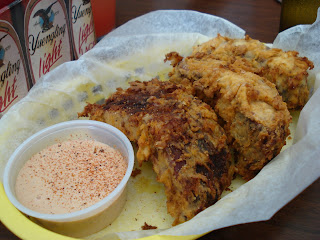 When I saw fried ribs, I was expecting something akin to the Fried Dr. Pepper ribs recipe that I borrowed from Blackened Out, but these were giant ribs. It looks like they were dunked in chicken fried steak batter. 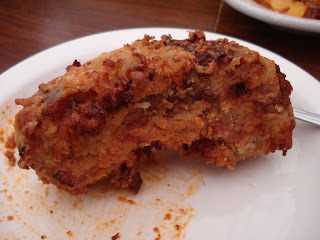 Trying to wrestle with my rib, I found the crust was thick and bland as could be. 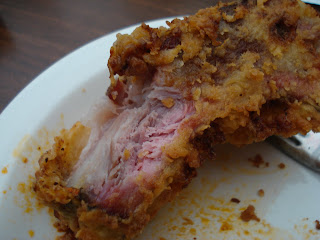 However, beneath the crust was a sweet and delicious smoked rib. I’m wondering if Fox Brothers really did just cut a rib off a rack of smoked ribs, dunk it in chicken fried steak batter and fry it? One thing I’m certain of is that I was not a fan of the sauce. It looked and tasted like watered down Thousand Island dressing.

Hoping to get a full taste of what bbq Fox Brothers had to offer, I decided that the BC Plate would be my best option. 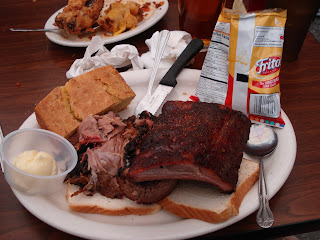 With a choice of three meats, I went with the 4 ribs, pulled pork, and sliced beef brisket, but there’s more! I had to choose two sides and it seemed natural to go with the Frito Pie and Jalapeno Cornbread.

How about starting with the Frito Pie? 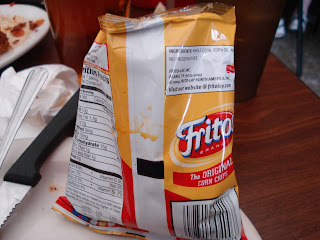 I love the fact that it’s served in a Frito bag. 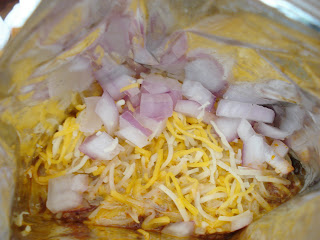 Inside there’s a layer of melted cheese, and a helping of raw chopped onions. 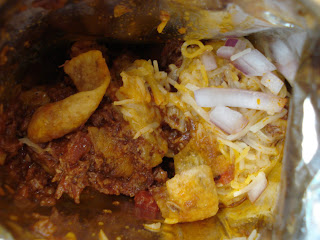 Ah, there is some chili hiding beneath the cheese. While I love they use brisket in their chili, it just isn’t a very upfront chili. There is a nice residual heat, but I like my chili to have pronounced flavors. Still, this was a delicious, beefy side dish that I would not hesitate to order again, I just might be liberal with the hot sauce next time.

Focusing on the meats of the BC Plate, I started with the ribs. 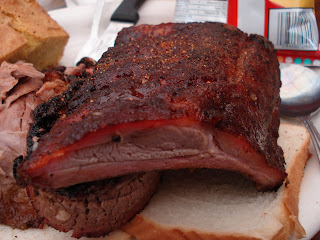 Supposedly you can fake your smoke rings now 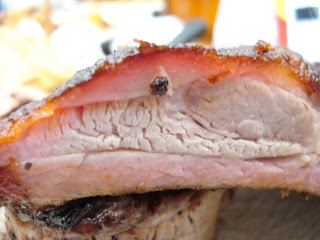 But Fox Brothers’ ribs get theirs the old fashioned way. 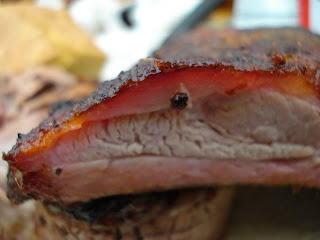 With each bite, it was a mixture of hickory smoke, and peppery sweetness from the rub. While pretty stellar on their own, the ribs really came alive with the Fox Brothers’ bbq sauce. The sauce added a layer of heat and vinegar that made for a delicious combination.

Moving to the left, I focused on the sliced brisket and was disappointed in what I found. 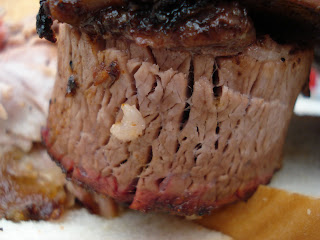 While the pepper and sugar rub worked on the ribs, it just doesn’t fit with the particular beef flavor of the brisket. The addition of bbq sauce did a decent job of ameliorating the situation, but I was still disappointed in the brisket.

Working to the last of the trio, it was time for the pulled pork. 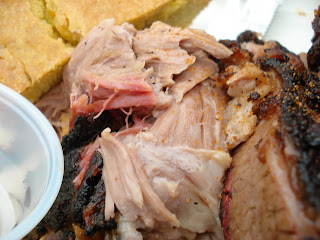 On its own, the pulled pork is smoky but dry and extremely overcooked. With liberal doses of the house bbq sauce, the pulled pork was much better, but it still pales in comparison to the ribs.

Unfortunately, I left my piece of jalapeno cornbread for last and it suffered because of it. 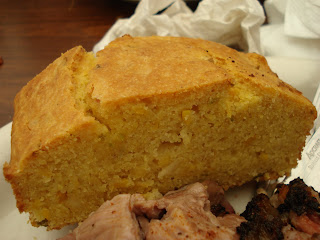 This was a big slice of cornbread, and I was amazed that every bite was full of jalapeno flavors. It was salty, crumbly, still warm, and absolutely delicious. The accompanying sweet butter, helped with a touch of honey (I think), made the jalapeno corn bread even better. I only wish I had eaten this first, and then maybe the heat of the cornbread would have melted the butter a little bit better.

As with most restaurants, there were some hits and some real misses at Fox Brother Bar-B-Q. I thought the pork ribs were outstanding, especially with the house bbq sauce. However for Texas inspired bbq joint, I was disappointed in the brisket. Still, the brisket chili is a fine option and it’s no wonder that it tops many of their dishes. I still may not have found all around excellent bbq in Atlanta, but for now, Fox Brothers is my new go to spot for pork bbq.