I’ve been stuck in a bit of a rut when it comes to dim sum in Atlanta. Every time dim sum comes up in conversation, we always seem to end up at Oriental Pearl, and for good reason. The dim sum, especially the weekend version, at Oriental Pearl is a constant crowd pleaser. However, I haven’t always driven to Oriental Pearl to seek my Atlanta dim sum sustenance. When I first started frequenting the city, I was a consistent patron of Canton House. Coming from Jackson, where up until last January dim sum was nonexistent, the idea of dim sum seven days a week was a wonder. Well, it’s been a few years, so Jennifer and I decided to give Oriental Pearl a rest and see if Canton House was still up to the challenge.

Arriving at noon on a Sunday, it seemed like we hit the sweet spot. There were plenty of full tables and the carts were frequently circulating the dining room. After being seated and asking for the usual hot tea and extra chili sauce, the first cart soon arrived. 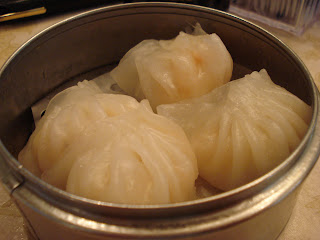 The har gao were first off the cart and these were a solid example of the dumpling. The wrapper was a little on the thick side, but with big chunks of shrimp and not much bamboo shoot filler, I thought the meal was off to a good start.

Spring rolls are one of Jennifer’s favorites and mine as well. 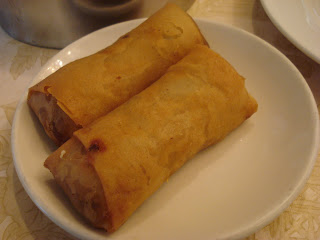 These pork spring rolls seemed to be nicely fried, but I soon found a pool of grease on the plate. Apparently these had been sitting for a while. Even so, with a good crunch and a nice mixture of pork and vegetables, these were a welcome dish.

Siu mai, another dim sum constant was ordered from the first cart as well. 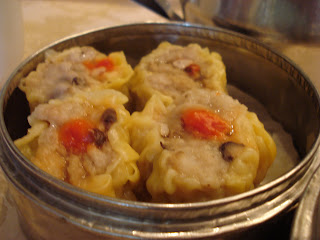 This particular siu mai are all pork and they were delicious. Inside the egg yellow wrapper, there was a big, juicy piece of chopped pork that was greasy and delicious with chili sauce.

Speaking of chili sauce, Canton House seemed to have a fine example. 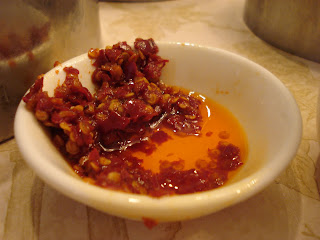 There’s a good chance this comes from a jar, but this chili sauce seemed to have a real kick to it.

Pan fried shrimp and scallion dumplings were the next dish on the table. 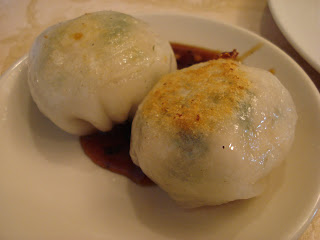 Right away I could tell these had been fried some time ago. Instead of a beautiful crunch from pan frying, there was a mouthful of gummy, doughy wrapper. Actually the filling on this dumpling was quite nice, but time and steam had ruined this dish.

One of my fast favorite dim sum dishes is seen juk guen or bean curd rolls. 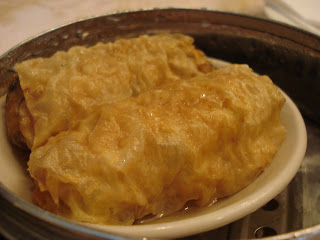 While these were a juicy version of the dish, there wasn’t the unctuousness that I had come to expect. The combination of black mushrooms, bamboo shoots, and pork was still tasty but there just wasn’t the mouth feel I was looking for.

A dish we picked on a whim was the steamed shrimp and scallop dumpling. 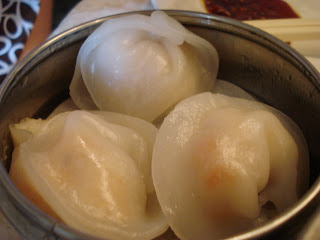 This wasn’t a bad dish, but you had to chew through a lot of dough before you got to the filling.

Steamed spare ribs is a dish I grew up on. 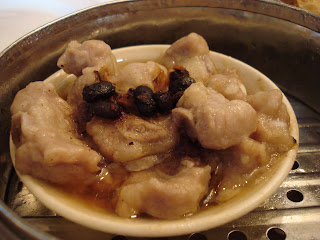 The Canton House version of my childhood favorite isn’t too shabby. There’s a nice black bean flavor, but there wasn’t any real chili heat. Still, even without the spice of the chili, these ribs were quite nice.

Chicken feet or fung jao is always an amusing dish. To those unfamiliar with dim sum, they wrinkle their nose or gasp when they see someone really enjoying a fried and then steamed chicken foot. 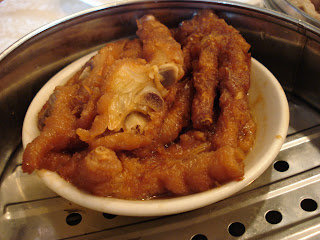 Unfortunately there were no dim sum newbies to shock and these chicken feet weren’t very good. Actually there was a decent flavor to the dish, but they were stone cold and congealed. I’m sorry, but I just don’t like the texture of cold congealed chicken feet.

Eggplant stuffed with shrimp is another dim sum favorite, but this version was new to me. 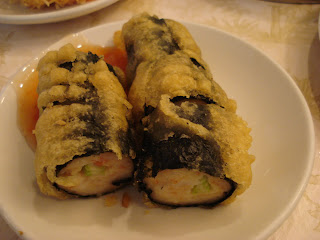 Something looks a little off. 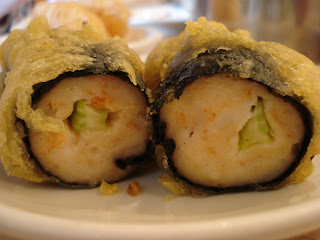 It looks like the eggplant had been hollowed out, filled with shrimp paste and had a strip of bell pepper stuffed in the middle. It was a novel idea, but it was all for naught because this was served cold.

A bird’s nest dumpling is love hate dumpling for me. 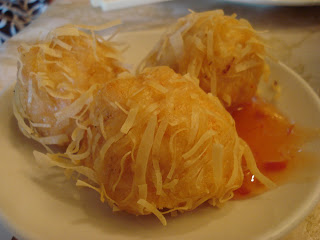 Usually these dumplings an absolute mess with fried bits flying everywhere, but these were relatively neat. However, once again, a perfectly good fried dish was served cold and much of the appeal was lost.

Much like the steamed spare ribs, pepper shrimp played a vivid role in my formative years of dim sum dining. 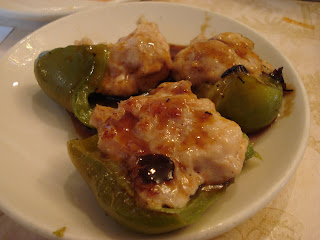 It wasn’t until after ordering that I noticed that this wasn’t pepper shrimp. No, the peppers were stuffed with pork. Thankfully, this didn’t ruin the experience. The pork was still quite tasty and covered with plenty of that delicious sauce, but I still prefer the classic bell pepper and shrimp combination.

At this point, we were ready to wrap things but when a fresh steamer cart emerged from the kitchen, my resolve melted. 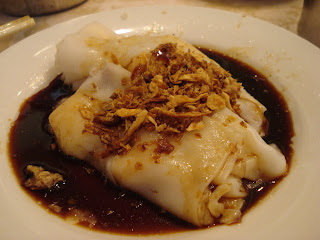 Shrimp chowfun is a difficult dish to master; not the cooking of it, but the eating of it. You’re almost guaranteed to get some of that sweetened soy sauce on your shirt. Messiness aside, I like how Canton House added fried onions to their chow fun, it was a real mixture of textures. However, I wasn’t really a fan of the flavor addition. I prefer the traditional shrimp chowfun.

Nearing the end, this was the second type of siu mai that Canton House had to offer. 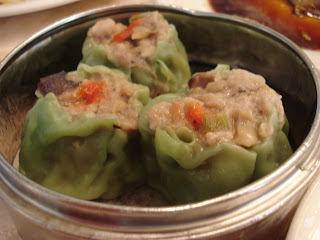 I’m not really sure why the chicken siu mai had a green wrapper, but it didn’t add much to the dish. This was just an allright dumpling, nothing too exciting or satisfying.

To finish the meal, we tried the last Canton House siu mai, the shrimp siu mai. 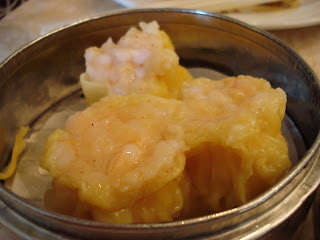 Before the last four plates, I was ready to write off Canton House. Too many of the dishes were served cold and it had gotten very annoying very quickly. However, just when I was ready to leave that last fresh steamer cart arrived and everything ended on a high note. Cold dishes and timing aside, it was an overall pleasant dim sum experience at Canton House. It was nice to see a few new combinations, but the poor presentations put a sour note on most of the meal. If you can’t get hot, fresh dishes at noon on Sunday, I don’t know what you can expect for a Tuesday dim sum lunch. I suppose this is why Oriental Pearl is our go-to dim sum spot.