It’s been years since I’ve eaten any sort of Asian cuisine in Oxford. The first and only time was some odd strip mall buffet with a friend, and I wasn’t too impressed. Apparently things have changed quite a bit since that time, as evident by the existence of Big Bowl Asian Bistro. An outpost for Asian cuisine is usually the first thing I seek out in a new town, but it took the guidance of Alvin & Kate along with Molly and Nick to introduce me to what this Asian bistro had to offer.

Thumbing through the menu, there are your standard Chinese dishes, e.g. General Tso’s, Sesame Chicken, Beef and Broccoli, and a number of familiar Japanese offerings but there’s also a fair amount of Thai dishes as well. I’ll admit they aren’t much more than a smattering of meat and vegetables with Thai curry paste, but there is that selection. Truth be told, I’ve never been too interested in restaurants that try to mix different Asian cuisines, but I was willing to give Big Bowl Asian Bistro a chance.

Refreshingly the meal started with a complimentary plate of fried dumpling and wontons. 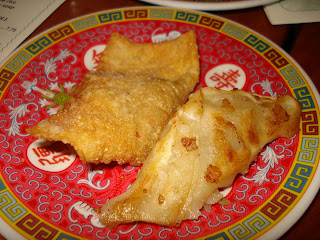 There wasn’t much to either one of these. The wontons were doughy, but with crispy edges and a simple, decent flavor. The pan fried dumpling was much the same, just all right, but you could tell these were greasy and likely frozen, not fresh.

It’s hard to resist a good spring roll, but I was curious what would be inside the Shanghai Crispy Spring Roll. 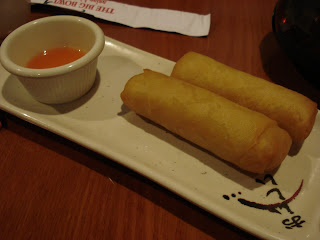 Pretty well fried, at first I thought these were all veggie and rice sticks 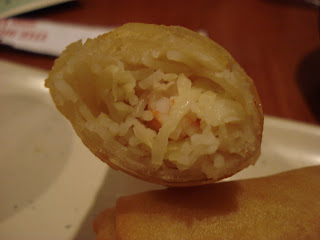 but I was wrong. Kate pointed out the shrimp in these spring rolls, but I still thought they were pretty bland.

Wanting to try some of their Japanese offerings, I ordered a few pieces of nigiri and sushi rolls. The first to arrive was the unagi nigiri. 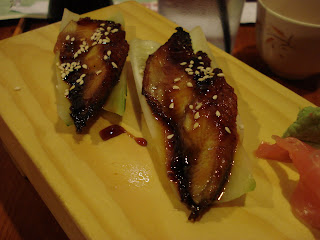 I love the taste and texture of barbecued eel, but I’ve never seen it served on a half of cored cucumber. 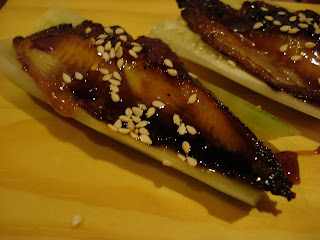 The eel was great but it was an odd combination of creamy eel and cool cucumber, one I quickly learned to enjoy.

As much as I enjoyed the nigiri, I was equally disappointed by the Lobster Tempura roll. 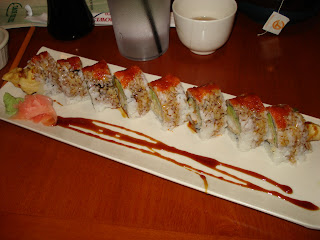 Maybe I made a mistake in ordering it, but it’s hard to resist the idea of a fried lobster roll. 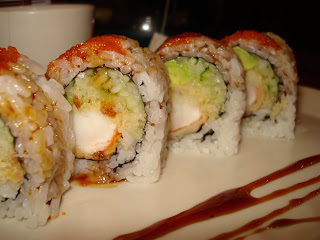 The roll was soggy as the sauce had completely saturated the rice. With no crispiness to the tempura lobster, it only furthered the muddled flavors. This wasn’t a terrible roll, but it certainly wasn’t a standout or one I’d order again.

I did order a third roll, but the waiter soon came to tell me that it was unavailable. Asking if I’d like to choose another roll instead, the first thing that popped in my mind was Hamachi Kama. 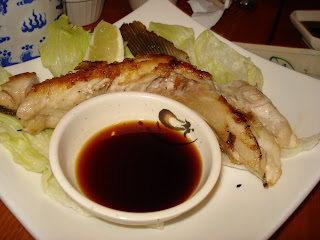 Like the Lobster Tempura Roll, ordering this might not have been a prudent decision. This too falls into the “meh” category. It was a decent version of the Yellowtail Collar, but it wasn’t grilled very well. There was no deep, rich crust and no real flavor.

Hoping to take another look at their Chinese offerings, I figured the Big Bowl Spicy Beef would be a winner. After all, it’s partially named after the restaurant; that makes sense, right? 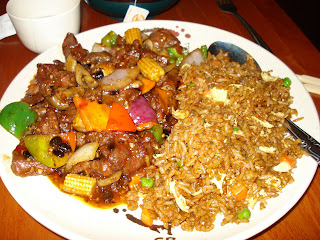 Beef with peppers, onions, and mushrooms in a spicy black bean sauce sounds like an excellent idea, but there were not very many forward flavors in their sauce. 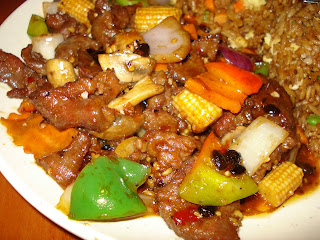 The beef was tender and there were plenty of equal sized chunks of pepper, onions and mushrooms, but there was nothing there to make it work together. I know there were black beans in the dish because they’re plain as day, but they were lacking any potency just like this dish was lacking any spice. As for the rice, it’s just plain buffet fried rice. It’s all veggies and too much soy sauce.

One thing that really did surprise me was that Big Bowl Asian Bistro offered a wide selection of bubble tea flavors. With flavors ranging from the usual fruit offerings of Mango, Honey Dew, and strawberry to the more unique Red Bean and Lychee, it was a fairly impressive selection. 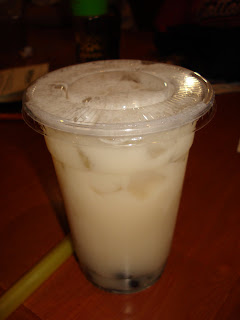 I went for a Lychee Bubble Tea and was surprised. I’ve never seen so much ice, at least ice that hasn’t been crushed. Not surprisingly, the bubble tea was much like the food at this Asian Bistro, passable, but nothing to get excited about. I’m not sure how many other Asian offerings there are in the town of Oxford, but I’d wager that Big Bowl Asian Bistro is not the only one. That being said, it seems like Big Bowl has fallen into the trap of trying to be all things to all people. Like most multifaceted approaches, Big Bowl Asian Bistro does do everything but not very well.

Right now, the Asian options in Oxford are not that great-- in the past we've had real Szechuan, Nepali, good Thai, and decent Indian. Right now, the best bet Asian-wise is an Indian place, although there's a better one in Jackson.

I'd go different routes than Asian when eating out here.

Seriously, drop me an email if you want advice.