After an early morning drive, an exciting but disappointing loss for the home team, and an exhausting night, it was Sunday morning and we were looking for breakfast. There don’t seem to be too many options for Sunday breakfast in Oxford, but I immediately suggested Big Bad Breakfast. Sarah volunteered to go early and get a spot, and after a 20 or so minute wait, we were in a booth and looking through the menu.

Once the round of ordering was finished, our dishes were soon at the table and first to arrive was The Pylon. 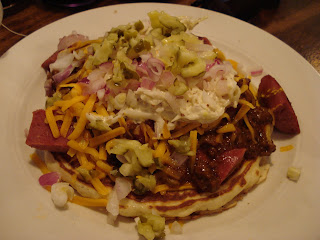 Described as a “A Hangover’s Worst Enemy”, it’s essentially a jacked up chili cheese dog on a waffle. Ah, but I bet you noticed there’s a pancake under all that mess. Yep, the waffle iron at Big Bad Breakfast was broken. It’s a little annoying when a breakfast centric restaurant can’t make a waffle, but I digress. 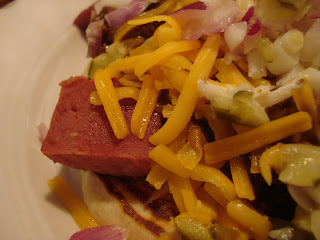 There’s a good hot underneath that mess of chili, slaw, cheddar, mustard, chopped pickles, onion, jalapenos and oyster crackers, but I just wasn’t that impressed. The waiter said it was better with the waffle, but I liked the light, fluffy pancake. I suppose I was just expecting more of a kick from a hangover cure hotdog. 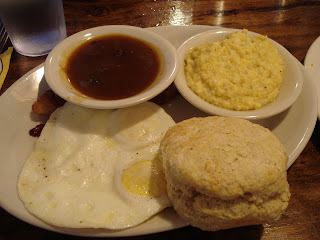 Two eggs cooked to order (over easy this time), a choice of patty sausage, bacon, andouille, or country ham (house bacon for me); home fries or grits (always grits); gravy, red eye, sausage, or tomato (red eye), and toast or biscuit (biscuit). With so many choices made for this one plate, I had no idea where to actually start.

Why not start with the grits? 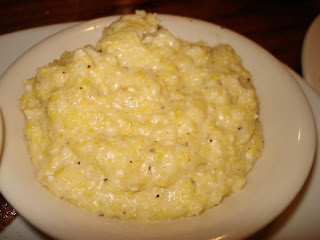 I assume these are Grit Girl grits and they were creamy and delicious. 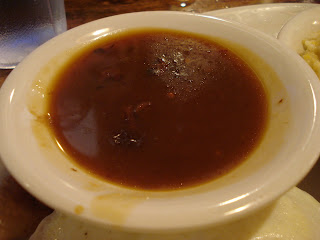 Good Red Eye Gravy is hard to find, but this was an excellent example of the breed. 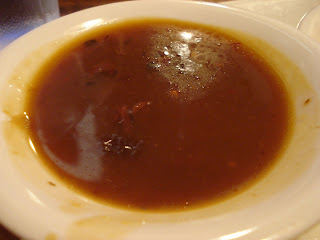 Rich, dense, and with a fair number of pieces of country ham, this was great with the biscuit. 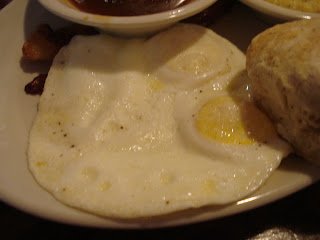 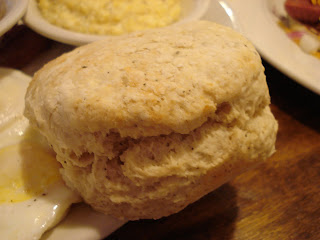 I don’t think this was the cathead biscuit that everyone raves about, but I was pretty happy with it either way, especially when it was topped with some blackberry or raspberry jelly. 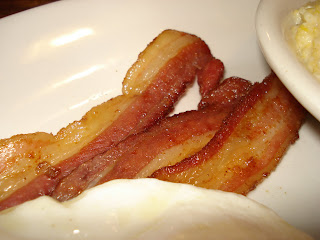 Finishing with the bacon, I was perplexed by this belly. At first I thought it was just a salty bacon, but each bite finished with a delicious Tabasco tail. There may have been only three slices, but each was a dynamite combination of salt, sweet, heat, and vinegar.

If I had a major gripe about Big Bad Breakfast, outside of a broken waffle iron, was the service. It was practically nonexistent. There were no refills, no drinks for a long while, just take your order and disappear, but service can be fickle. So, outside of the service, I was pretty happy with Big Bad Breakfast. It wasn’t outstanding, but a nice break from your average breakfast. The Big Bad Bacon was another story. I made sure to buy a pack for home and guess what? It was just as good if not better when I made it at home.

The tabasco tail is because he cures the bacon with the pulp that's a remain from manufacturing tabasco sauce.

Each time I go, I tell myself I will try something besides the Dear American Airlines- but I can't make myself change it up other than adding a side of the aforementioned bacon heaven.