AJ's on the Lake - Madison

I hate a menu that doesn’t explain its markings. AJ’s on the has that sort of menu, at least on their lunch menu. A dozen or so dishes are highlighted, 10 boxed in with a rectangle and two others highlighted with an oval. Since these dishes are set apart, does that mean they are house specials, customer favorites, new items? Is there a difference in the dishes with an oval instead of a rectangle? Sure, I’m being overly pedantic, but a little written legend would help.

After asking the waitress, it turns out I was partially right. The highlighted items are best sellers, but there’s no difference between the oval and rectangle marking. With that annoyance behind me, I set out to get a taste of the menu, starting with the Fried Oysters. 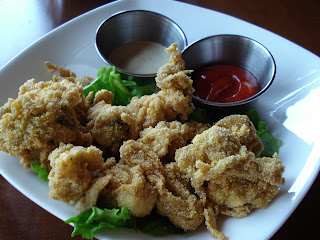 Labeled (in parentheses) as a local favorite, these have the look of fat gulf oysters. 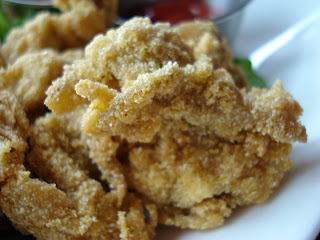 Battered and fried, these are simple oysters. There’s nothing in the way of seasoning, just you and the oyster. While pretty good, it makes me miss the oysters at Herbsaint.

The first highlighted item I ordered was the Seafood Egg Rolls. 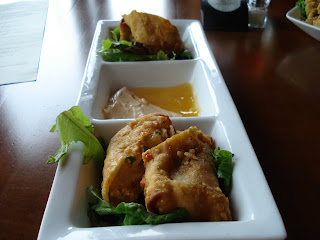 I was a little skeptical. I like the idea of Fresh Louisiana Seafood and roasted red pepper cream cheese, but I like them separately. 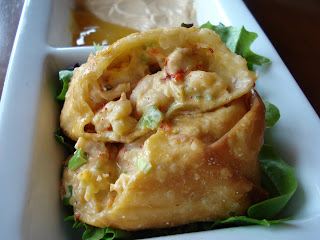 Arriving at the table steaming hot and overflowing with creamy seafood, this was an excellent way to burn all the skin on your lips and in your mouth, but it’s worth it. The seafood is perfectly cooked and the red pepper cream cheese envelopes everything. It’s a cheesy and tasty appetizer. 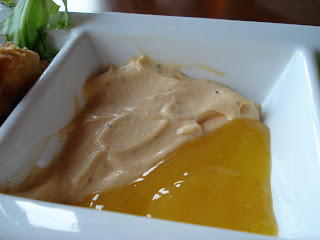 However, I couldn’t figure out why it came with two dipping sauces, a “spicy” sriracha aioli and a sweet orange sauce. The orange was muted, and the aioli was in desperate need of more sriracha, but it’s a moot point. The spring rolls pack enough flavors, they don’t need any help. Even with a doughy and soggy wrapper, this was a gooey, mouth burning, and delicious dish.

Seeing both style gumbo and Crawfish Bisque on the menu, I was hard pressed to make a decision. However, they both needed their moment to shine. First up was the bisque. 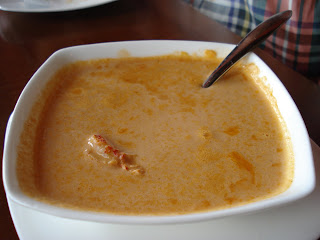 This one caught me off guard from the beginning. When something is called bisque, there are certain expectations, namely the addition of cream. There was no creaminess to be found. Maybe the oily patches on top are the results of someone trying to pass off low fat half and half as heavy cream, I don’t know. What also mystified me was the oddly prominent flavor. Was it saffron, anise? I’m still not sure.

It might seem excessive ordering two soups but there was a reason for my madness. On the menu, the gumbo is labeled as “with chorizo sausage”. I later found out it was a typo, but I was genuinely curious. 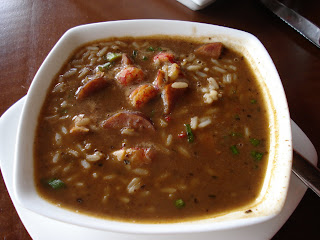 Well, there was no chorizo in this gumbo, and not much depth of flavor either. There was a very pleasant aroma and a front heavy spiciness, but nothing that said this was made with a time consuming dark roux. 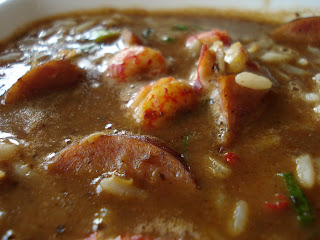 Actually this wasn’t a bad gumbo for . There were plenty of slices of andouille, crawfish, and rice, lots of rice. It’s not a bad choice, but it’s not worth going out of your way.

As is the case with most restaurants, my entrée came with a salad. Always interested in homemade dressings, I went with the comeback. 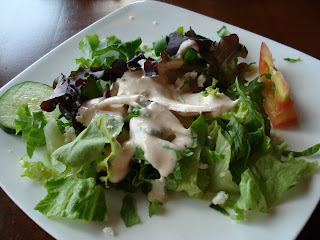 The salad was…..a salad, nothing special. The comeback was extremely creamy, but lacked any real pepper flavor. I like a little punch to balance the full creaminess of comeback, but it was still a very nice comeback dressing.

Looking to try another highlighted dish, I went with Cajun Red Fish for my entrée. 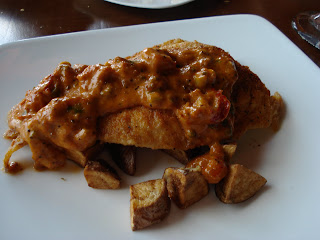 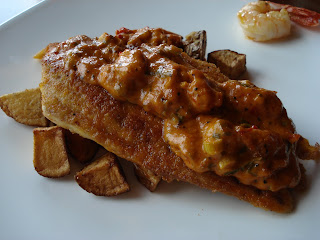 The Cajun Crawfish Sauce was even thicker than it looks. More akin to wall paper paste than a sauce, as a result the sauce and its flavor covered and dominated everything be it good, bad, or ugly. I tried to get a taste of the fish and was greeted with a fish that was overcooked on the edges and over seasoned all the way around. 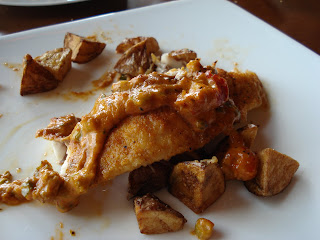 With the fish so heavily seasoned on its own, the sauce just compounds it. It really was like eating a shaker of Cajun seasoning, just too much to handle. While the sauce was too powerful for an already potent fish, I think it might be great over pasta. There it might have a chance to get a little thinned out.

While I wasn’t a fan of the Cajun Red Fish, the Grilled Gulf Shrimp were a whole different story. 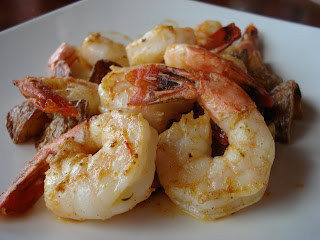 These were plump juicy shrimp with just a little seasoning. Delicately prepared, this was a well thought out dish. The shrimp were allowed to shine through with their own virtues while the special seasoning and lemon butter sauce provided a solid foundation.

It was a mixed bag for me at AJ’s on the Lake. I would question how they won best seafood in , but I can’t think of too many other seafood centric restaurants in town and Mississippi Magazine readers seem to have a one track mind when it comes to voting. There isn’t much of a conclusion here. You can take or it leave it when it comes to AJ’s on the Lake. Even with the Seafood Eggrolls and the Grilled Gulf Shrimp, I’m not really sold on the whole idea.

Our orders apparently were forgotten, and we had to remind the waiter on several occasions to fill our glasses as well. By the time our food finally arrived (which included a wrong order for one of us), we were so hungry, we just ate it to get the ordeal over with.

The food was mediocre, service was poor and we will not be going back.

I've come to the same conclusion after giving AJ's about 4 chances. I like the seafood egg rolls and the tres Leche cake but everything in between is forgettable. I had wonderful expectations of the fried oysters - that satisfying crunch when you bite into them and that creamy yum of the oyster. AJ's were not crunchy and chewy rather than creamy. My mouth was so disappointed. There are such better options in Ridgeland/Madison that it's not worth giving them yet another chance.