Given the opportunity, I find it quite hard to turn down a Mississippi Tamale. So when I was asked to visit Vicksburg, my thoughts immediately turned to the venerable combination of meat and spices. Of course, when it comes to Vicksburg, everyone talks about Solly’s. Even the Southern Foodways Alliance lists Solly’s as the sole Vicksburg stop on the Delta Tamale Trail, but I’ve heard there was another, The Tamale Place. Apparently there’s quite a back story between Solly’s and The Tamale Place, but I don’t want to delve into familial politics and arguments, I just wanted to try some different tamales.

There really isn’t much to the The Tamale Place. Walking inside, there was just a takeout window and an unmarked door. Well, tamales and high end décor rarely go hand in hand, besides the menu is much more interesting.

I had to wait until 3 in the afternoon for lunch, so I was famished. As a result, the man behind the counter gave me an odd look when I gave him my order, but soon enough things starting piling up. With no tables and not a chair in sight, I had the gall to ask if there was a dining room. A smiling “no” was all I got in return. Annoyed and still hungry, the only real solution was to eat in the car.

The pork boudin was the first thing I pulled out of my to-go bag. 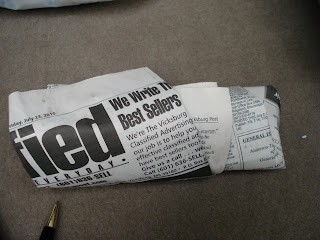 I love the resourcefulness of tamale joints. Why let newspaper go to waste? 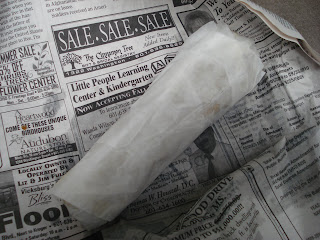 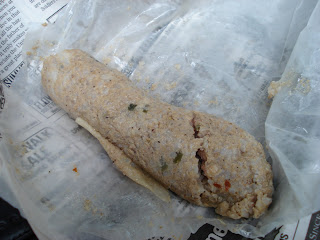 There’s the pork boudin and doesn’t it look appetizing? 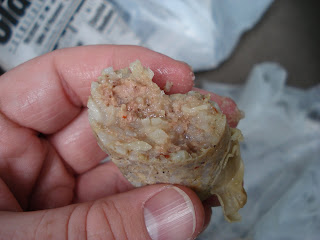 With no casing in site, this boudin fell apart at a glance, but there was a nice flavor to this Louisiana favorite. It seemed like this was just the trinity, rice, and pork, but it worked. Granted as hungry as I was, the newspaper was looking pretty appetizing, but this boudin was much better than it looked, even if it was missing any real seasoning.

Moving on, it was time to see if the tamales were worth their salt. 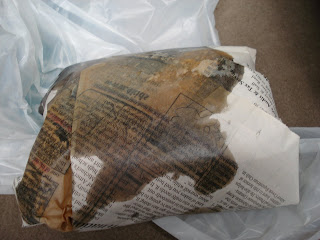 You can already tell these are going to be some juicy tamales. 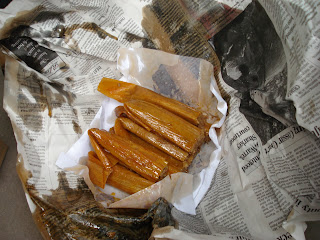 Even without the flash, you can see a sheen of grease, isn’t it great? 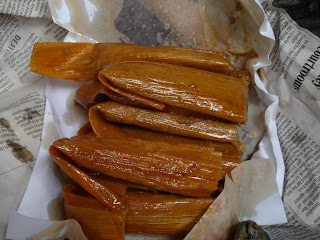 I was surprised to see these packaged as separate tamales. Usually tamales are tied in threes or wrapped in foil six at a time. 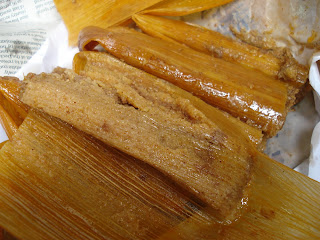 Unwrapping a tamale was a huge mess in the car, but it was quite worth the effort. 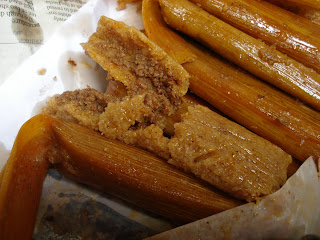 Made with beef, these tamales weren’t very forward in their spice. I was surprised to find them a little watery, but I kept tasting what I thought was garlic, cumin, and cayenne. 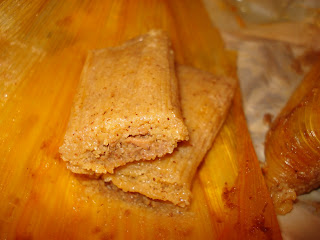 With a fair ratio of meat to corn meal, these were pretty good tamales with a nice residual heat to them.

Having satiated my hunger with a link of boudin and a few tamales, I decided to take the rest home. Of course, boudin and tamales would make a fine meal, but I wanted to look at some other parts of The Tamale Place’s menu, starting with the Frito Pie. 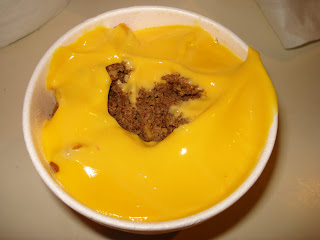 After the 40 mile drive, I was greeted with the blinding neon yellow of nacho cheese. 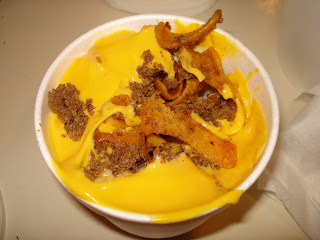 With a little digging, I found there was a fair number of Fritos in there along with a little bit of chili. 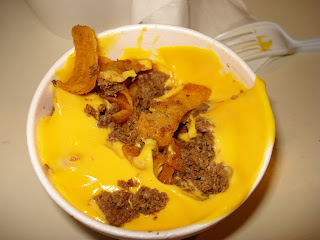 I’ve never really encountered a Frito Pie with this much cheese and the bowl suffered for it. Even though I could see chili in the bowl, it was completely lost in a sea of cheese, tastes of pickled jalapenos, and salty Fritos. This was a complete salt bomb and a poor representation of chili, but I couldn’t stop eating it.

If you thought the Frito Pie looked like a heart stopper, you’ll be floored when you see the Tamale Supreme. 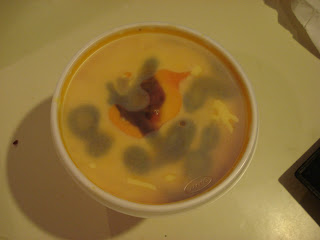 Filling a whole quart container, there’s a sense of foreboding just looking through the lid. 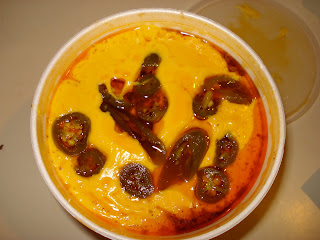 Floating on that ocean of nacho cheese is a few jalapeno boats and a oil slick. 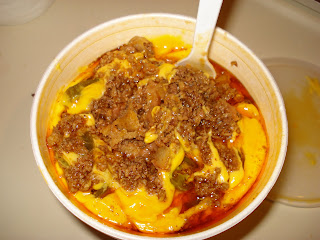 With a little digging, I found there were actually tamales in this Tamale Supreme. 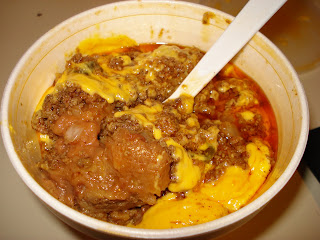 Again everything chili related was lost in the fray, but the tamales actually shone through here, I suppose that corn meal or masa really helped. This was a really satisfying bowl, but it’s big enough to satisfy for three or four meals.

Ignoring the bowls of processed nacho cheese, I was actually quite happy with the tamales from The Tamale Place. They really had some uniqueness to them. Sure, the flavor wasn’t as upfront as my local choice, Tony’s Tamales, but they had their own virtues. At the very least, it’s nice to have a second option for tamales in Vicksburg.