There are few people who don’t relish the idea of a relaxing multicourse meal that allows you to have a respite from the busy work day. Unfortunately that’s rarely the case. When it comes to lunch, the M.O. is fast, filling, and if at all possible reasonably priced. Conveniently, downtown Jackson and the neighboring areas have a few restaurants that fit those criteria. Ideally, I’ll be able to pay a visit to all of them, but that might be a pipedream. I’ve already visited a few downtown eateries (Congress Street Bar & Grill, The Elite, The Mayflower, etc), but I think it’s time I turned my eye to Steve’s Downtown Deli.

Situated in the ground floor of the , Steve’s always has a good lunch crowd. It’s been a long time since I’ve eaten at Steve’s Deli, so I was curious if it was a crowd of convenience or was it the food? For the first time back, I couldn’t think of a better way to start than with a soup and sandwich. 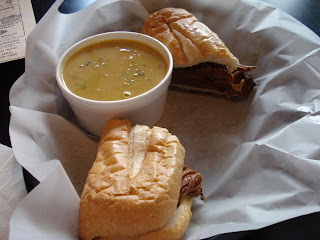 A Hot Roast Beef Poboy and a cup of Senegalese Chicken Peanut Soup might sound like an odd combination, but it works. 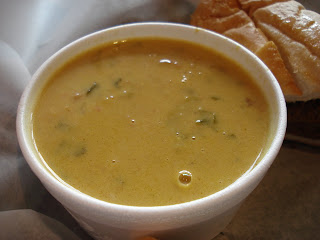 First off the soup is immediately reminiscent of a Thai curry. While I liked the big chunks of celery and tomato, I was a little setback by the overcooked chicken meat. Don’t get me wrong, the chicken was very flavorful, it was just overdone.

What about that roast beef? 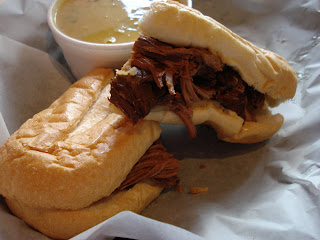 Well, you can see that Steve’s doesn’t skimp on the quantity. There is a lot of a beef on this sandwich. 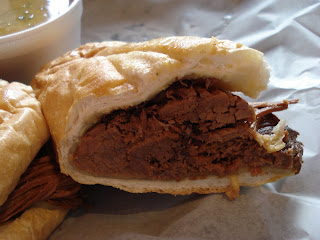 There was also plenty of beefy flavor to match the quantity, but it was like a bovine desert. Each piece was drier than the next.

Thankfully, Steve’s Deli had given this sandwich some thought. The solution was a cup of au jus. 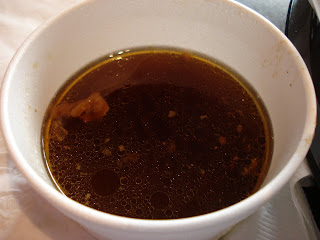 I know it looks a little greasy, but this is just what the sandwich needed. With each bite now packing that necessary juiciness, this was a sandwich I could get used to.

Jumping to my next visit, I thought the lighter side of Steve’s Downtown Deli deserved a visit. How’s a nice slice of a quiche for light fare? 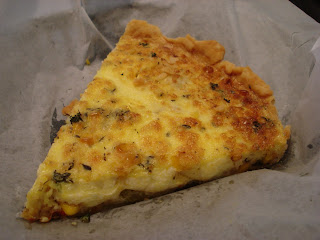 I wouldn’t normally think of ordering a crab and roasted corn quiche at a lunch spot, but this looked quite good. 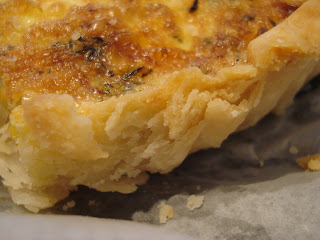 Sure the crust might have been premade, but it was still buttery and flakey. 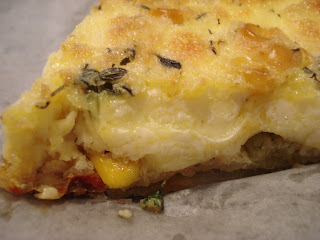 As expected there was a fair amount of visible corn. It is a cheap filler and I actually thought this would be all corn. 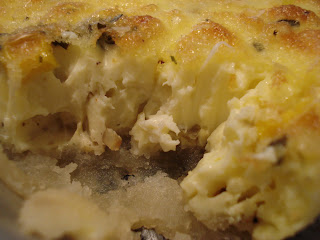 Imagine my surprise when I found there to be a good bit of crab in this quiche. I did have a hard time picking out the flavor of the crab, but it was there.

Actually, as much as I enjoyed the quiche, I was a little more preoccupied with my other order, the brisket wrap. 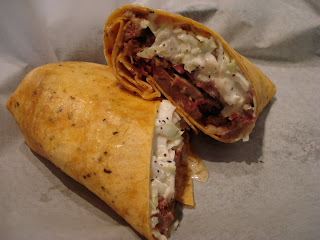 I ordered this on a blind recommendation. If I had known there would be this much cole slaw, I would have never ordered it, but it was on my table and I gave it a try. 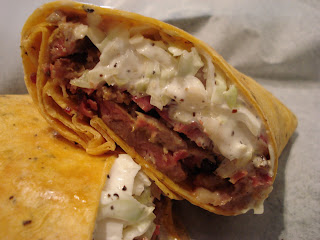 The surprising thing about this wrap is how much beef there is inside. At first glance, you’d think there were maybe 3 or 4 slices, but you’d be wrong. I think there was almost an equal ratio of beef to cole slaw, and my god was it juicy. 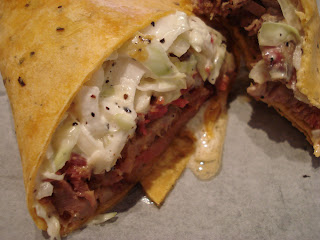 Each piece of beef was fall apart tender. It didn’t seem smoky or barbequed. It actually looked vaguely like it had been corned, but there was a fair amount of cayenne or smoked paprika. Anyway, that tender beef combined with that cole slaw and made a juicy, drippy, delicious mess.

When it came to my third visit, I was at a loss. I’d had nothing but positive experiences from Steve’s, but I had no idea what to order. Maybe it was an act of desperation; maybe I wanted to see if Steve’s could do something simple, I ordered a Club Sandwich. 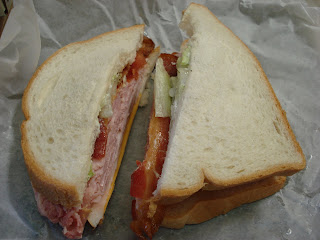 There’s no reason for a deli to ruin a club sandwich. It really is as simple as slapping cold cuts on a piece of bread and calling it a day. 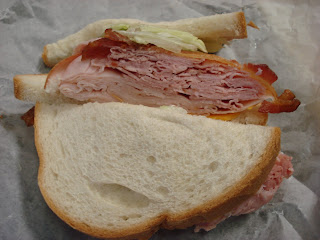 In a mark of consistency, Steve’s Deli does a pretty good club sandwich. This particular Club is made with buttermilk bread and comes with a healthy amount of turkey and ham, but it’s surprisingly lean on the bacon. Still, with plenty of meat to compensate, it’s again good marks for Steve’s Downtown Deli.

So after three separate occasions, what do we end up with? First, the trademark Senegalese Peanut Chicken Soup is worth a taste; just make sure to get it early in the day. Second, Steve’s can do a mean sandwich and wrap. There’s no shortage of meat, and the brisket wrap is worth the mess. True it’s not the best Roast Beef poboy I’ve ever had or the best brisket or the best quiche, but Steve’s Downtown Deli is a lunch spot. It fills the three criteria of fast, filling, and price, and does a good job at it.

As far as I can tell, everything at Steve's is made in house. It really is the best food downtown.