I originally had reservations for Stella! on February 9th, but I was on the wrong side of the Lombardi Gras parade. It’s taken me a while to get back down to , but now, a good seven months later, I was at Stella! and ready to see some of the magic of Chef Scott Boswell first hand.

With a cocktail menu, a dinner menu, and a caviar menu, Stella! seems to have all the bases covered. I had some initial feelings of indecision. The duck five ways looked like an excellent choice, but I had heard wonderful things about their steak. However, my mind was quickly made up when I saw the tasting menu. Yes, a seven course tasting menu seems a little excessive especially with the optional seven course wine pairing, but I’ve always found that tasting menus seem to show off the chef’s culinary prowess. So with my mind made up, it was just a matter of sitting back and seeing what Chef Boswell and his kitchen had to offer.

The first amuse bouche was soon at my table. 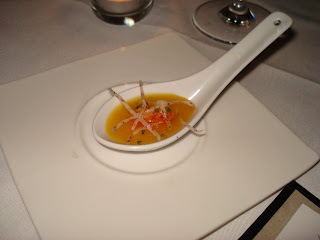 Kimchee spiced shrimp over a mango-champagne puree with crisp taro root and chives
was all packed onto that soup spoon. 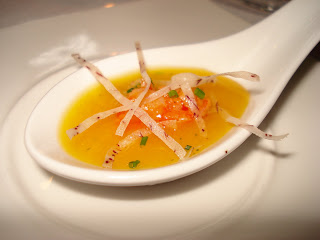 Very sweet with just a subtle crunch from the taro root, I love the combination of kimchee spices and the sweetness of the puree. The shrimp also had a lovely texture, and was served with a Kung Fu Girl Reisling. It all combined for a very nice start to the meal.

For a second amuse bouche, Boswell went with a fried wonton. 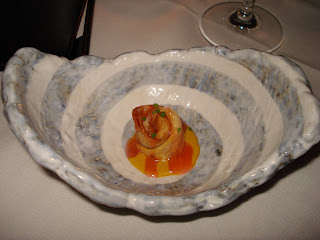 More than just a wonton, this was a kobayaki jam wonton with a peanut, coconut, and curry sauce with red chili oil. 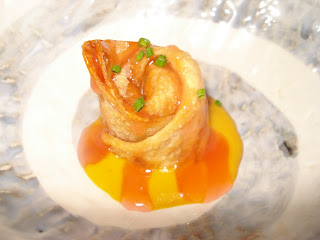 The wonton was very doughy, but I really enjoyed the sweet sauce.

It wasn’t until the third dish that the actual tasting menu began. 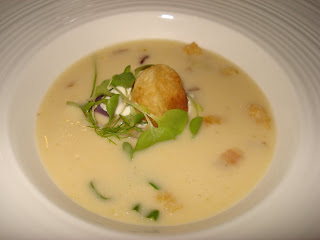 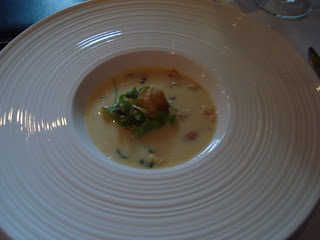 At first this seemed like a tarted up version of a potato soup, but there’s so much more to it. The lardons are made from Nueske’s bacon, and they made a dynamite combination with the potato puree. Paired with a Jean-Jacque Girard Savigny-les-Beaune , I want all my potato soups to taste like this.

After the soup came an egg dish remarkably similar to the amuse bouche at Restaurant August. 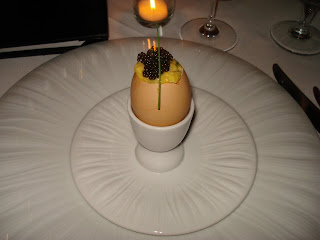 Lobster, egg, and caviar, the breakfast of champions. 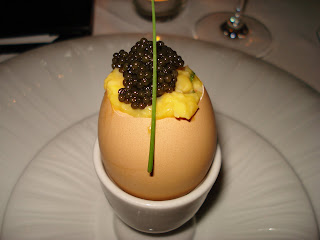 Made with Canadian lobster, North Shore Farm Egg, and American paddlefish caviar, this was probably some of the best scrambled eggs I’ve ever had. 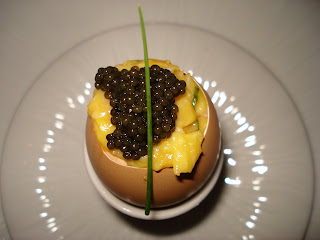 The eggs were creamy, there was just enough salinity from the paddlefish caviar, and the J. Lassalle Premier Cru Chigny-Les-Roses Champagne was a stellar pairing.


Moving away from eggs, the next dish was a shrimp and mushroom risotto. 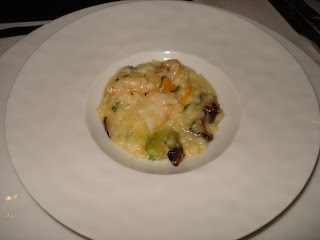 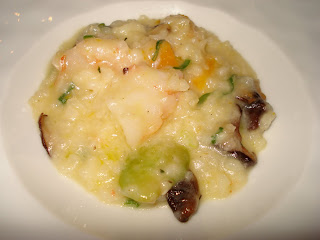 This risotto was on par with the rest of the dishes so far. The shrimp were succulent and the fava beans were surprisingly tender. There were a few surprises for me in this dish. The risotto wasn’t as creamy as I expected and the shiitakes had a fairly subdued flavor. I suppose I’ve gotten too used to eating dried and reconstituted shiitakes.

The next savory course was a study in Japanese simplicity and subtlety. 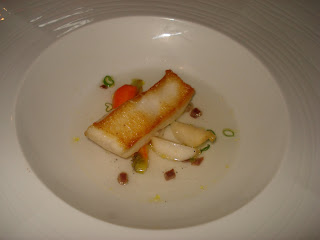 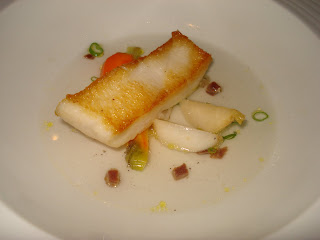 Paired with a Hinomaru Jozo “Manabito” Junmai Ginjo Sake, the sea bass was excellent and came with a wonderful sear, but the broth was almost flavorless, but there was something that kept bringing me back. I was surprised to see the Iberico Ham was used like a piece of country ham or salt pork, it only seemed to add salinity to the dish. I suppose it was almost a bacon dashi or something similar. As for the sake, I rarely drink the stuff, but it was an excellent pairing to this dish.

The last savory dish was a return to eggs, but gone was the seafood. This time, steak was the star of the show. 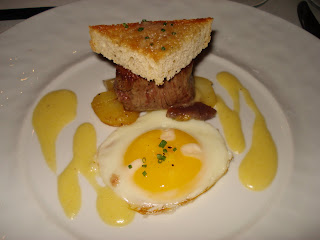 Labeled as Steak and Egg, this was a Seared Filet of Prime Beef Tenderloin and Sunny Side Up Arcona Egg with Breakfast Potatoes, Truffled Hollandaise and Texas Toast with Foie Gras Butter. 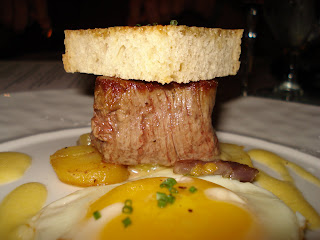 Everything on this dish had a very forward flavor. The steak was juicy and overflowing with that delicious beef flavor that so many steaks seem to lack. The Hollandaise and its truffle flavor was actually overwhelming on its own. The Texas Toast with Foie Gras was forward but delicious. As pronounced as these flavors were, when I got a little of each on my fork, they all synced beautifully. With a glass of Feraud-Brunel Cotes du Rhone Villages, this was another standout dish.

With the savory section of the tasting menu finished, it was on to the sweets and some of Boswell’s odd combinations. 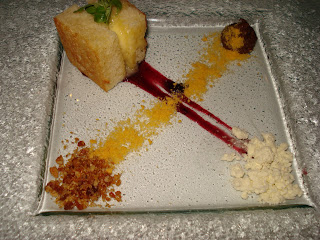 This is a grilled cheese sandwich. Actually it’s a Delice de Bourgogne Grilled Cheese with Candied Pecans, Powdered Pistachio, and Captain Crunch Nutella Explosion. I had no idea where to start with this dish; there were so many potential combinations. 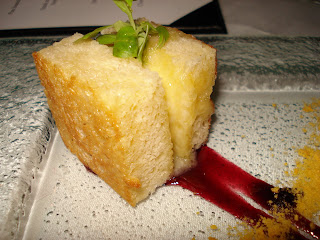 The Grilled cheese, outside of the powdered pistachio, was the most subtle component of the dish. The bread was perfectly toasted and the cheese was a delightful slight tart. 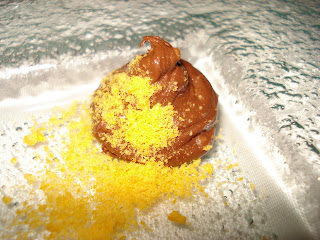 How often do you see Captain Crunch on a tasting menu? Well, there’s powered Captain Crunch with nutella, and I was surprised at how tart the cereal was. I haven’t eaten the stuff in years but I don’t remember Captain Crunch being at all tart. Regardless, I liked the dish, and the Domaine des Baumar “Cuvee Le Paon” Coteaux du was again well thought out, I’m just still not sure what to make of this dish.

The seventh course in the tasting menu was a more traditional dessert, a German Chocolate Cake. 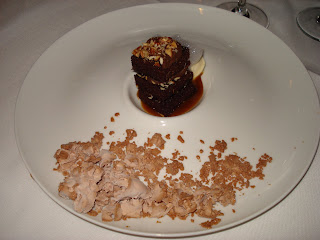 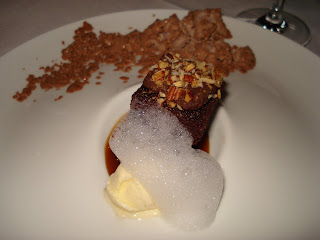 There was no confusion with this dish as it was all simply delicious, well the foam was a little too subtle but everything else was spot on. Each bite of that tower was a symphony of chocolate, and the toasted coconut and pecan ganache was almost too rich to handle. 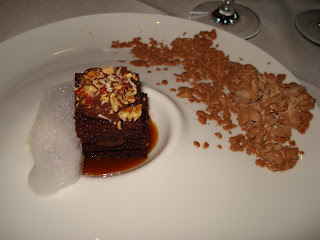 As for the Milk Chocolate Mousse Nitro, I love seeing a dish arrive at my table smoking from liquid nitrogen. The 7th course wine pairing was just as well done as the other 6. This time it was a New Orleans Special Reserve Maeira.

One would think that seven courses plus two amuse bouche would have been sufficient, but there was yet another course! 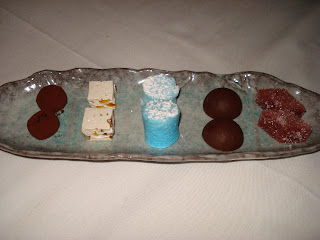 Working left to right, there was a 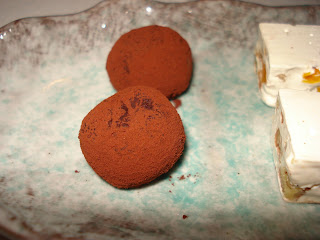 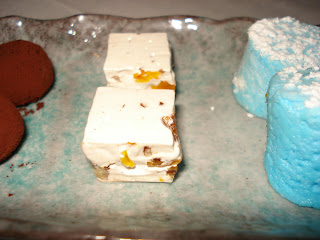 a strawberry cherry pate a fruit, 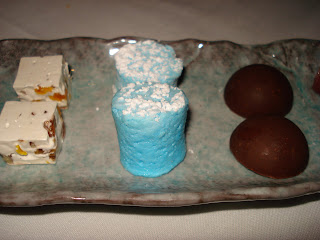 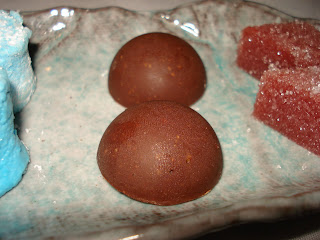 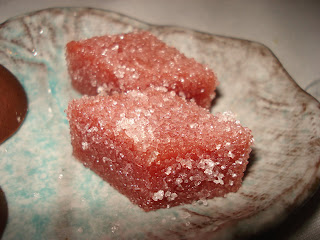 And lastly a fig apricot pecan candy. Each one was delicious, particularly the peanut gianduja, however I couldn’t get over the blueberry marshmallow. All I could of think was smurfs.

With 10 courses in all, a stellar wine pairing, an extremely knowledgeable and helpful wait staff, and simply delicious food, I would say that my dinner at Stella! was completely worth the seven month wait. Chef Scott Boswell and his kitchen presented an excellent tasting menu, and I’m chomping at the bit to try more of Stella! and his other restaurant, Stanley.