In my continued efforts to explore the eateries of downtown , a relatively new place appeared on my radar, The Ole Tavern on . Previously known as the George Street Grocery, the Ole Tavern is the latest incarnation. Situated behind the State Capitol, the Ole Tavern on certainly has a look of antiquity to it. Of course the real question is whether this tavern can serve up more than pints and spirits.

Looking through the menu, I was glad to see a few unique items like fried pimento cheese and Southern Pecan Onions Rings. 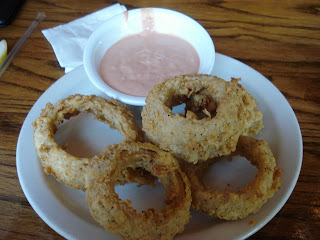 Onion rings are a typical example of bar food, but it’s nice to see they added a local twist. 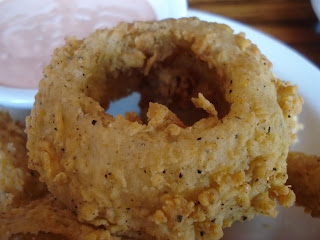 These are some substantial rings and they come with a substantial batter. True to the name, there is a taste of pecan beer to the batter, and they are quite well seasoned. 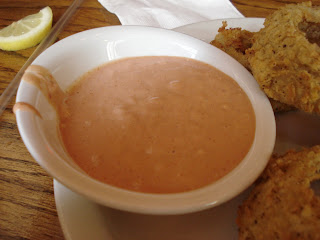 What falls flat is the side of comeback dressing. This is actually quite a nice version of the Jackson favorite and it comes with a nice spiciness, but it just doesn’t sync with the nuttiness of the Southern Pecan batter.

As long as I was going for good bar food, how could I go wrong with a burger? 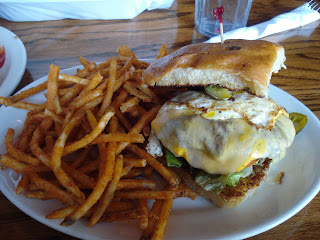 This is actually the King George Burger, and it’s really just a bacon cheeseburger with a fried egg on top. 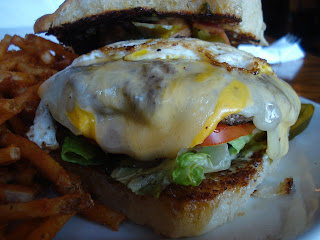 Even without the huge bun, this is a well sized burger. Unfortunately it was sabotaged from the start. I tried to pick up the burger only to find the top half of the bun was toasted while the bottom was soggy and essentially disintegrated in my hands. 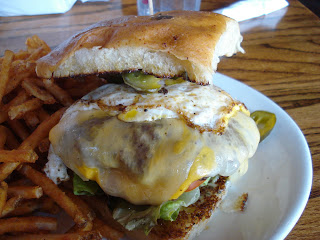 On it’s own the patty is quite juicy, but it doesn’t have any real beef flavor and it’s not very well griddled . The bacon was oddly sweet, the egg was overcooked, and the whole thing was really just a mess to eat. That being said, the combination of egg, cheese, bacon, beef, and the other toppings really worked quite well. It’s not a great burger, but not too bad for bar food.

Accompanying The King George Burger was a healthy portion of seasoned fries. 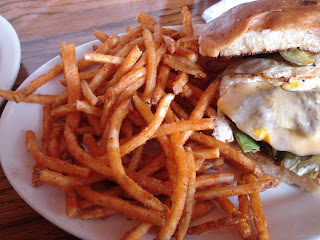 They weren’t particularly well fried, but they were crispy just by virtue of their size. Battered and well seasoned, these fries are a nice compliment to the burger.

The second time around I took a different approach to the Ole Tavern. Like most places in , the Ole Tavern has their version of gumbo. This one is a chicken and sausage gumbo. 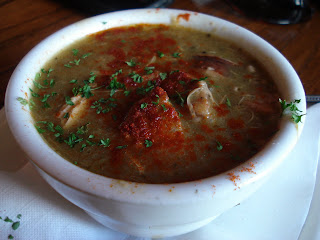 Actually this doesn’t look too shabby. There are lots of shredded chicken and big chunks of sausage floating around. 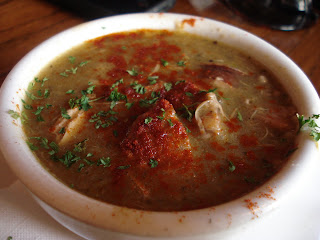 Going for a taste, I was intrigued to find this to be a thick gumbo, but without much depth to the flavor. The okra had done plenty to thicken the gumbo, but there wasn’t the body of a good dark roux.

With my entree I was brought a very nice looking salad. 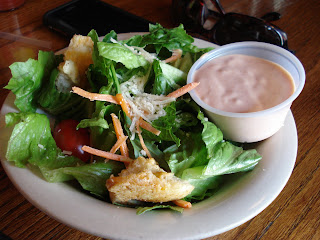 Unfortunately, the timing at the Ole Tavern is miserable and I didn’t have a chance to try it. This time it was 20 minutes between ordering and receiving my cup of gumbo. Less than two minutes later, the waitress arrived with both salad and entrée in hand. How am I supposed to enjoy the various dishes when they’re all brought at once?

Speaking of the entrée, The Ole Tavern on has a blackboard of daily specials and on that day Soft Shell Crab over Grits topped the list. I know the end of July might be stretching it for soft shell season, but I decided to give it a try. 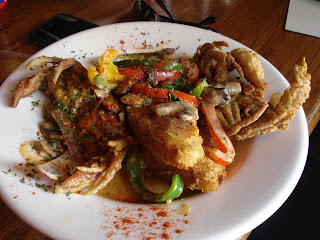 Well, it certainly isn’t a well organized dish. It seems like there’s crab legs, peppers, and grits jutting out everywhere. 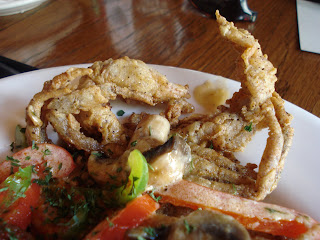 On their own the crabs are decently fried, but extremely salty. There’s a heavy breading here that ruins the delicate taste of a soft shell. 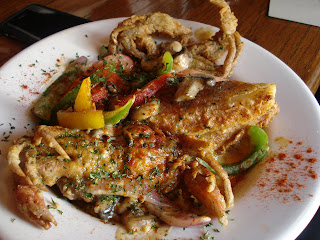 Oddly enough, the saltiness of the crab is masked by the huge wedges of fried grits and the overabundance of cream sauce. It all seems to work, for a few bites. 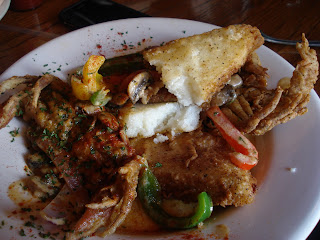 Maybe I was overestimating the Ole Tavern. After all, it takes a leap of faith to eat crab at bar, tavern, or pub. Simplification was the key. I’ll skip the poboy, skip another burger, and go for something classic, tasty, and probably fried. 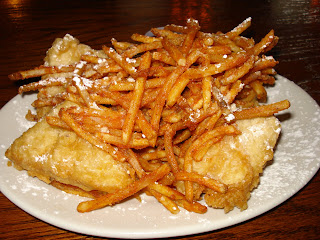 I don’t know how well a Monte Cristo sandwich fills those criteria, but just look at that mountain of sugar powdered fried food! 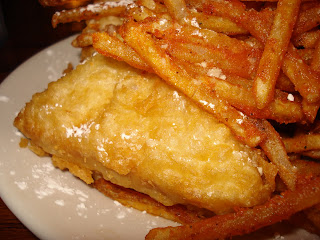 I was surprised to see that the kitchen at Ole Tavern had quartered the sandwich before frying. So instead of a fried sandwich cut in half, I had four individual fried sandwiches. 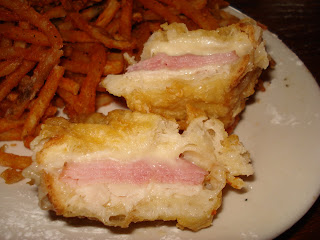 Honestly, just one of the quarters was enough for a meal. The batter was thick, and inside were layers of juicy ham and turkey. 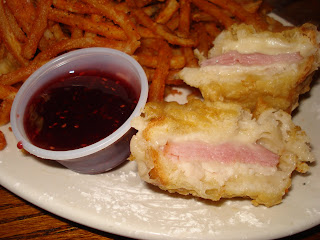 Of course, you can’t have a fried sandwich without something sweet. The raspberry coulis was the perfect compliment to the Monte Cristo. 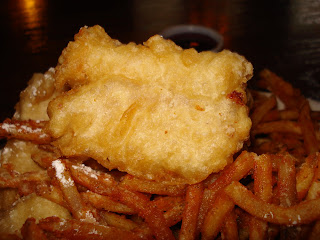 It’s hard to forget the mountain of seasoned fries on the plate, and they seemed to have received the bulk of the powered sugar. This made for an interesting and quite tasty combination. This sandwich was a welcome change from the soft shell debacle, but even this Monte Cristo was missing something. With each bite, I kept wishing there was a taste of grain mustard in the sandwich. This Monte Cristo needed just a little bite to break up the sweetness.

Speaking of sweetness, I made sure to only have a few pieces of my Montecristo, just to save room for dessert. Since I first saw the Abita Root Beer Float on the menu, I knew I had to give it a try. 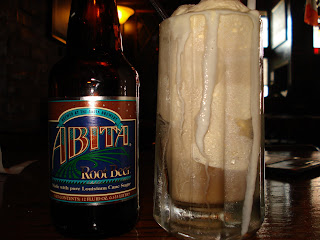 Well, there’s certainly no fanfare to this. The Root Beer isn’t chilled, and there was no sign of the advertised Pirouline straw. However, that’s not important. What’s important is the full flavor of cane sugar root beer and creamy vanilla ice cream combined. This really was a delicious root beer float, even without the straw.


I’m not really sure where I stand with The Ole Tavern on George Street. There really isn’t anything exceptional about it. For the most part, the food is simply mediocre, but this is a tavern, not a gastro pub. That being said, the timing is appalling. The two times I had an appetizer and entrée, they arrived at practically the same time. My drink would constantly go unnoticed and to go orders were never filled correctly. Regardless, there is a pretty fair lunch crowd, and people don’t come here to be wowed with the kitchen’s culinary prowess. This is bar food; stick to the traditional fried bar food and you’ll be all right.

Ha, at least they got the root beer float right!

I don't believe the Ole Tavern on George Street is run by Glenn Foods, at least not according to their website.