Earlier this month and for the second time this summer, Jeff Good sent out an email announcing a Sal & Mookie’s Beer Dinner. Having been a patron of the Sam Adams & Atlanta Brewing Company Beer Dinners, I was excited to read this dinner would feature ’s own Lazy Magnolia Brewery. As if a Lazy Magnolia dinner wasn’t interesting enough, there would also be a special firkin of Reb Ale.

Arriving early to claim a good seat, I was greeted with a pint of Reb Ale. 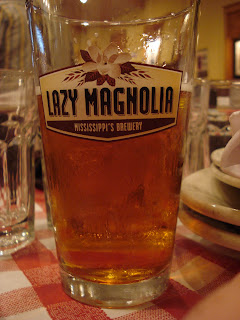 It’s a shame that all dinners don’t start this way.

Once we were all seated, there were the usual welcome speeches and words from the brewery, but this time there was a very informative video from Lazy Magnolia. 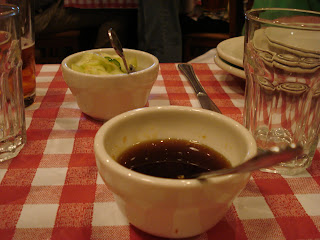 While that was being shown, the waiters and waitresses were passing out sauces to each table. 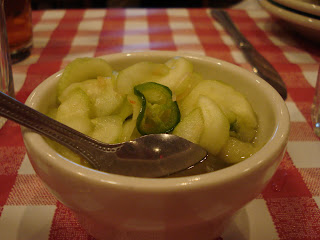 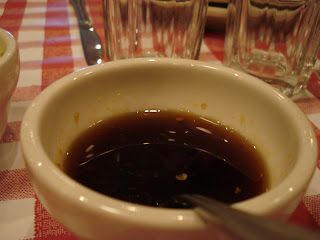 Next was a chili garlic dipping sauce.


I didn’t get a chance to take a picture, but there was the usual excitement of tapping the firkin. Apparently it takes a fair amount of force to get the valve into that cask. 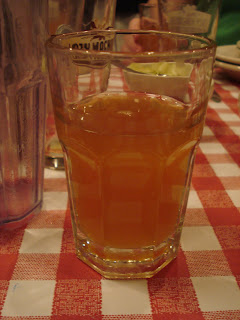 Here’s what the firkin contained, the star of the show, a special batch of Reb Ale brewed with pureed mango, roasted habaneros, and key lime zest. 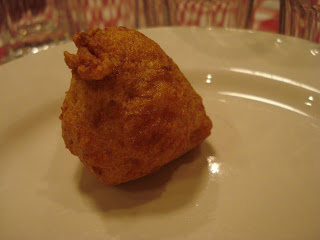 To go with that special ale was the first course, a Thai fish ball. 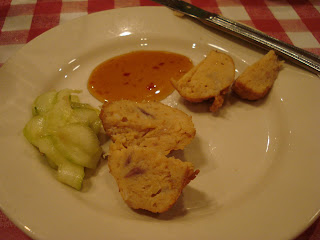 Made from shrimp and drum, this was a tasty beginning to the meal. I was disappointed the sauce wasn’t at all spicy, but the cucumber salad had a nice jalapeno kick.

The second course started with a fresh beer, a glass of Indian Summer. 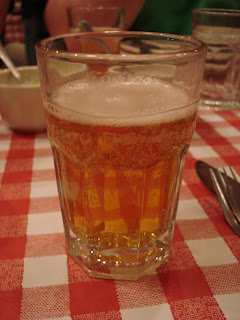 Indian Summer, it’s a quality beer and it never disappoints. 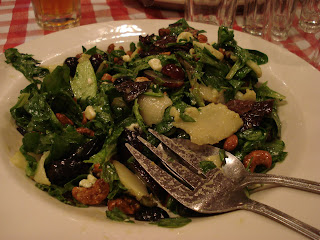 Like most multicourse meals, this one featured a salad, specifically a Curried Cashew, Pear and Grape Salad with an Orange Vinaigrette. 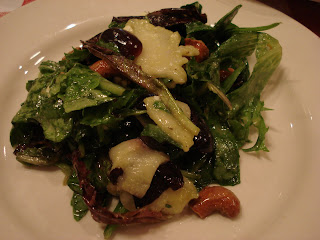 While it doesn’t hold a candle to that amazing apple and spinach salad from the Sam Adams dinner, this was still an excellent salad and a very nice pairing.

Our third course started with a glass of Southern Gold. 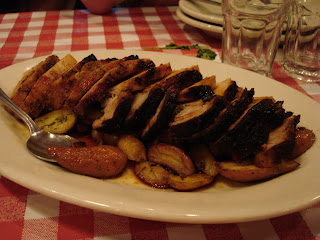 That is a small with Lavender and Honey over roasted Fingerling Potatoes. It had a very nice crust, but like most cuts without any marbling, this loin was overcooked and dry, but the fingerlings were worth fighting over.

The fourth course brought out the pitchers of Lazy Magnolia’s Southern Pecan. 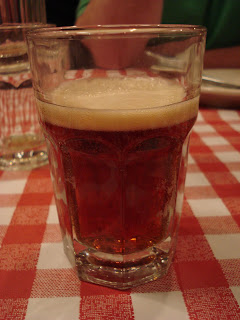 This is the Lazy Magnolia that I see everywhere in the southeast, but I didn’t know the back story behind it. Apparently it took the brew master 30 tries before she was happy with the results. 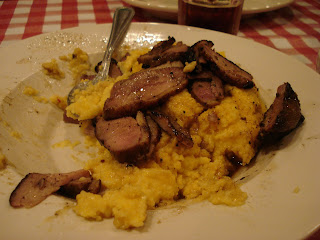 With the glass of Southern Pecan, the fourth course featured a Maple-Cured Duck Breast smoked over Pecan Wood over Soft Polenta. 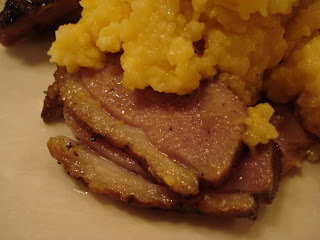 Apparently Dan Blumenthal smoked this at home on his big green egg, and I’m afraid he got a little carried away. I love the flavor of smoky duck, but this was all smoke and no duck. It’s a shame to see this happen to Jewish bacon.

Fifth and finally was dessert, 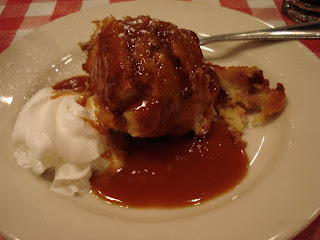 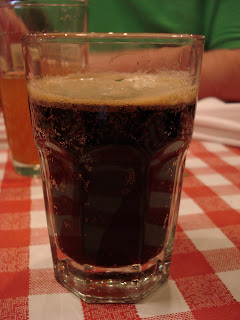 Served with a glass of Lazy Magnolia’s Jefferson Stout. On their own the dessert and stout were great, but they just didn’t mesh very well.

Five courses, three hours, and some glasses of beer later, I would have to say that the Lazy Magnolia Beer Dinner was another enjoyable beer dinner from Sal & Mookie’s. It was a pleasure to see all the products of ’s home brewery, especially another special firkin. While one or two of the dishes and/or combinations left me wanting, Jeff Good and Dan Blumenthal did another fine job. I suppose it’s just back to waiting to see when Jeff Good will send out another email.