In my effort to visit every downtown eatery, it’s inevitable that I would eventually stop at Hal & Mal’s. Long a fixture on , Hal & Mal’s has ingrained itself into the very fabric of . Not only does Hal & Mal’s have a reputation for quality live music, they sponsor the Jackson St. Paddy’s Day Parade. So, come March, when you see an odd number of ladies in red wigs and green sequined dresses, think of Hal & Mal’s.


While live music and sequined dresses are all well and good, I’m more interested in how Hal & Mal’s does for their lunch crowd. So, with my preferred method of three visits, I think I got a pretty good handle on what Hal & Mal’s has to offer in the way of food.

Looking through the menu, it was a forgone conclusion that I would try the gumbo. 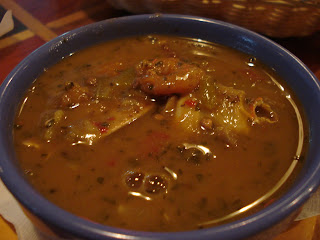 Labeled as an award winner, Myrtis’ Bayou Gumbo had a glowing recommendation from an anonymous reader 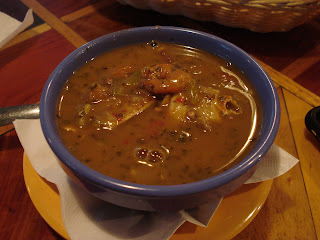 From the start things were looking good for Myrtis’ Gumbo. 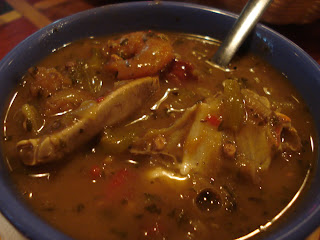 Big chunks of spicy sausage, large, actually a little unwieldy pieces of crab were all quite nice. However, there was a severe problem with the shrimp. Everyone in seems to use those miniscule shrimp that are more often mushy than not. That being said, with a little sauce, this was a satisfying gumbo. It can’t hold a candle to the gumbo at Brigtsen’s or Herbsaint, but then again, few can. 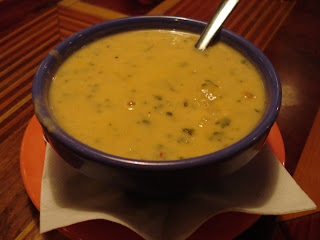 This bisque has so much going for it. It’s creamy, very well seasoned, has a not so subtle kick, there are nice lumps of crab meat through the bowl, but there’s a downside. 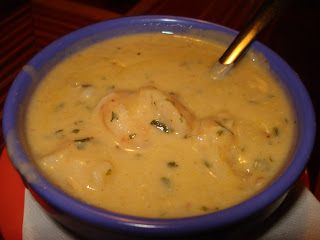 There are plenty of shrimp in this bisque, but once again the texture ruins it. This is actually very good bisque, but mushy shrimp dominates. To be truthful, the crab is mushy and poorly frozen/defrosted as well, but it’s less noticeable. 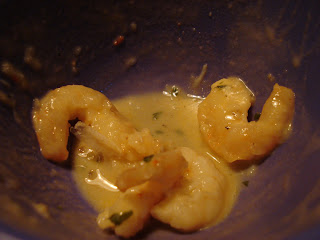 When the waitress bussed away my bowl of leftover shrimp, she didn’t even blink an eye. Maybe she too knew the shrimp were terrible.

Moving on to the entrees, I tried to go for the major groups at Hal & Mal’s, po-boys, gravy laden sandwich, and fried food. Even though it seems more fitting for winter, there’s just something about a hot turkey sandwich that I find nearly irresistible, especially when it’s served open faced and covered in gravy. Enter the Vashti’s Hot Turkey. 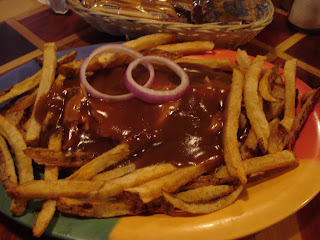 It’s an Atkin’s diet nightmare. Hot sliced turkey is piled high on wheat bread, doused in gravy, and surrounded by French fries. Speaking of French fries, these fries are unpeeled and pretty well salted. They’re a treat when hot but they’ve got about a 5 minute goodness lifespan. 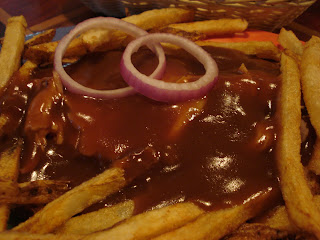 There’s a lot of gravy on this dish, unfortunately it’s more quantity than quality. From the kitchen, it’s mediocre gravy that needs a heavy dose of pepper before it’s palatable. 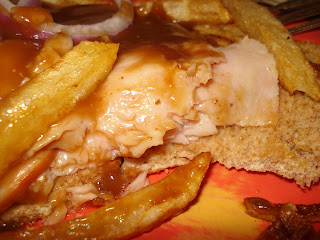 You can see that you get a pretty fair amount of turkey, and on the whole this dish works. It’s simple comfort food, but I do love the irony at work. It makes perfect sense to take something relatively healthy like brown wheat bread and lean turkey and cover it in gravy and French fries.

I don’t often order catfish, but at Hal & Mal’s, I decided to give the fried catfish a try. 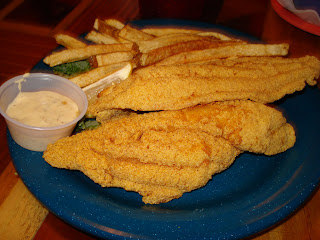 Mississippi catfish fillets, deep fried, and served with a side of French fries and tartar sauce, it has potential. Well, to start the fries were terrible this time. They were still well seasoned but they had evidently been sitting out for some time. As for the fish, I was actually quite happy with these fillets. 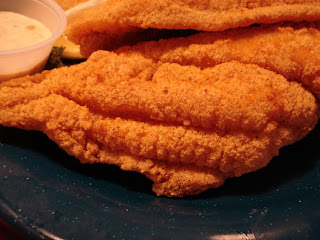 The fish was well fried and heavily seasoned but not in an overpowering way. Paired with a little tartar sauce, it was quite pleasant, but I couldn’t figure out the seasoning. It tasted like it was seasoned with a bbq rub, I kept tasting cayenne, black pepper, salt, and a lot of sugar. Regardless, the catfish are not a bad option.

Poboys in Jackson seem to be a touchy issue for me. At a number of places, I found that people are confusing cheese steaks for poboys, and at others, the poboys are just terrible. Well, at Hal & Mal’s, I’m afraid it was the latter. 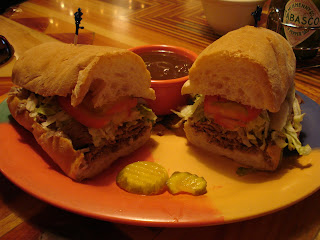 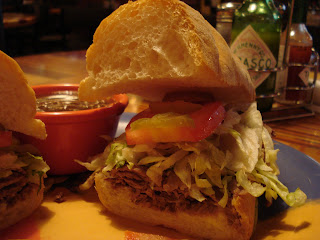 Who in the world thought it was a good idea to serve the gravy on the side? Looking past that, the bread is all right, the beef is overcooked and lacking any real beef flavor. 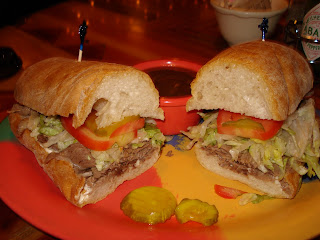 There’s no mayo or even a proper dressing for this poboy. There’s no messiness and this is not a real roast beef poboy. Still, once I added the gravy and a healthy supply of pepper, this was a passable poboy for Jackson, but still completely subpar.

Hoping to knock out two classic poboys with one swing, I went with the “Half ‘n’ Half”, a shrimp and oyster poboy. 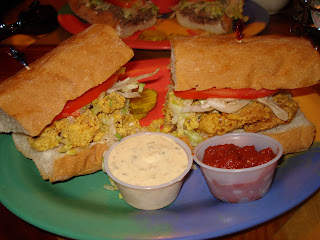 I was surprised to see they took the half and half mentality literally with fried oysters on one side and shrimp on the other. 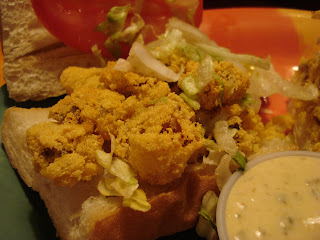 Going for the oysters first, each bite was rewarded with tiny, overly salted oysters. They had been decently fried, but the overuse of salt killed any chance this side of the poboy had. 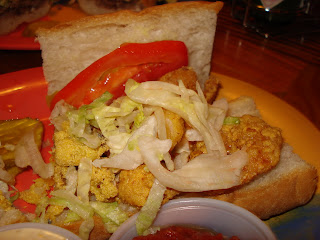 Moving to the shrimp half of this poboy, I was worried that the gummy shrimp would make another appearance. Instead this was an all right poboy. The batter was still too salty, and while these were the same shrimp as the bisque and gumbo, they weren’t gummy. I suppose frying instead of boiling helped the texture. Still, you can tell these shrimp aren’t that great, there wasn't that quality snap when you take a bite.

Just in case someone asks why I avoided the hot tamales, there’s a simple reason, Hal & Mal’s doesn’t make them. Tony’s Tamales makes tamales for Hal & Mal’s, and I’m much rather get them from the source. When all is said and done, I can’t say there’s much worth getting at Hal & Mal’s. While the gumbo is pretty good, I wouldn’t say it justifies a special trip. I don’t want to slight Hal & Mal’s, it really is a Jackson institution, but for their parades and music. The food is just forgettable.