I’ve been in a bit of a rut. Since I started writing these blog posts about cooking at home, I seem to keep harking back to either Fuchsia Dunlop’s “Revolutionary Chinese Cookbook” or “”. There’s nothing wrong with these books; from most accounts they are stellar representations of and cuisine. Still, I’ve read a fair number of reviews that say “ of ” doesn’t accurately portray cuisine. So in an effort to expand my knowledge of Sichuan province and its food, short of going there, I’ve been trying to find more cookbooks about the cuisine.

Most searches turn up the same results, either Dunlop’s first cookbook or a book called “Mrs. Chiang’s Szechwan Cookbook”. Originally published in 1976, “Mrs. Chiang’s Szechwan Cookbook” seems to be one of the first English language introductions to the cuisine. I’ve had this book for a few months and I’ve cooked a few simple recipes out of it, with sterling results. However, on Sunday afternoon, I was looking for a recipe with ground pork.

In the index there is an entire subsection of pork that lists recipes for ground pork. I originally thought that Mapo Doufu would be a great dinner but the only tofu I had was frozen. Instead I looked through the section of shredded pork recipes and found String Beans and Pork Shreds (Sijidou Chao Rousi). The recipe was perfect. I had pork chops in the freezer and string beans fresh from the garden.

Here’s the first part of the recipe, the string beans. 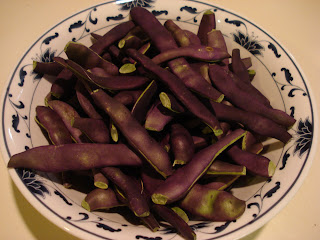 ¾ of a pound of purple string beans, don’t worry, they turn green when cooked.

After washing the beans and breaking off the ends, the recipe calls for the beans to be sliced into shreds. 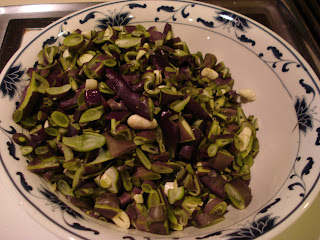 I suppose you could call these beans shredded.

Next in the ingredient list was 4 medium pork chops. The idea is to slice off the fat and shred the meat. Essentially you cut the meat into 2 inch long strips and then slice it horizontally. 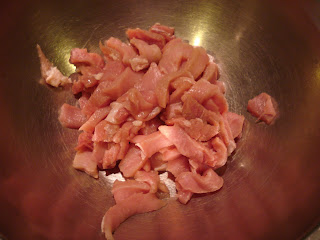 At least that’s how I interpreted it.

In an example of Chinese resourcefulness, the fat isn’t wasted. 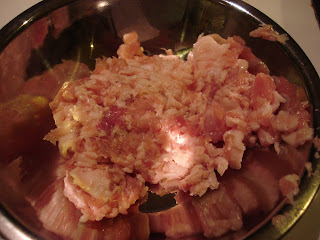 For the fat, the instructions call for you to chop it into pieces the size of grains of rice.

With the pork and the pork fat sliced and chopped, it’s time to start marinating the pork. 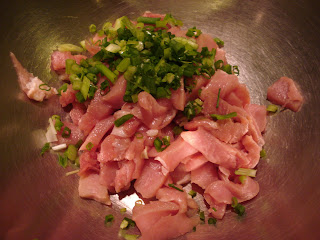 First 4 scallions are cleaned, cut into 2 inch lengths, shredded, and then added to the pork. 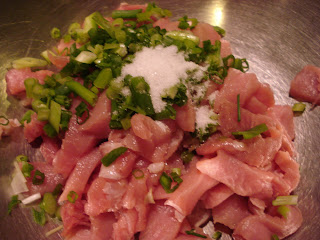 Next was 1 tsp of granulated sugar. 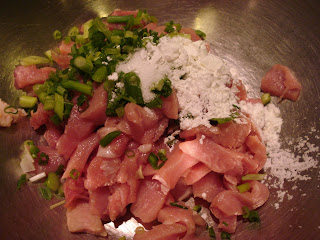 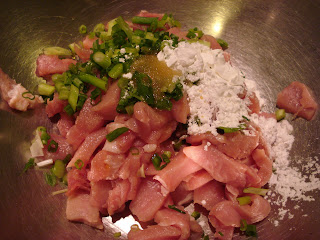 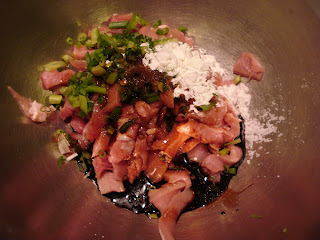 and lastly 3 tbs of soy sauce. 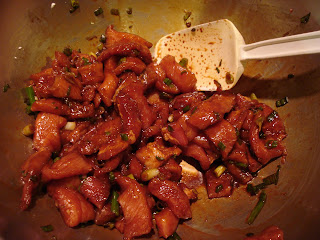 Everything is mixed thoroughly.


Before I started cooking, I made sure to have everything ready. 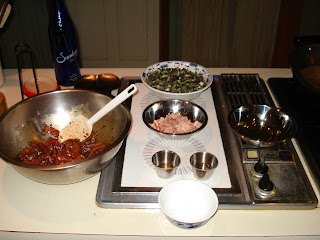 With everything measured, I can now start cooking dinner.

First, my wok is put over high heat for 15 seconds and then 2 tbs of peanut oil is added. Once the first few wisps of smoke appear, the beans are added to the wok. 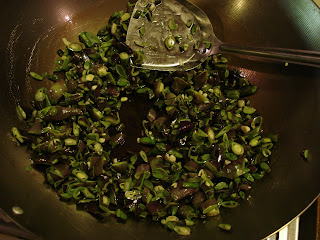 The beans are vigorously stir-fried for a good 45 seconds. 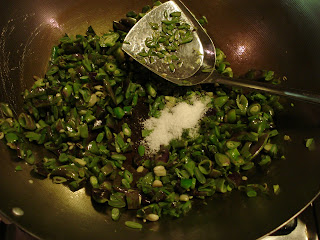 Next 1 ½ tsps of salt is added and the beans are cooked for another three minutes.

After three minutes of cooking, the beans are set aside in a serving dish. 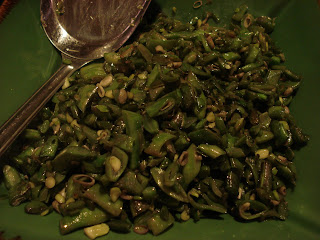 I told you they would turn green. They’re so green they almost blend into the plate.

With the beans set aside, I wiped out the wok and reheated it for the next part of the recipe. 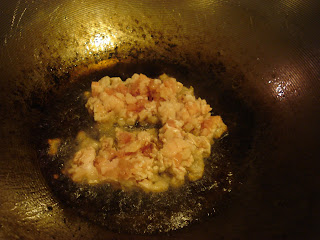 ¼ cup of peanut oil is added to the wok and then all of the diced fat comes soon after. 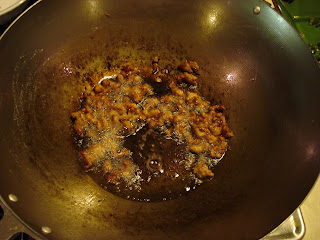 The idea is render all of the pork fat and make the dish even tastier. 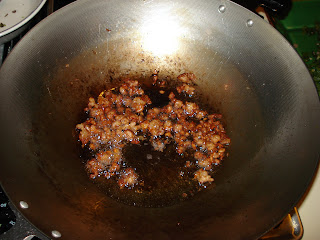 I wish I had been able to cut the fat into finer pieces.

Now that the fat has mostly rendered, it’s time to add the sliced pork. 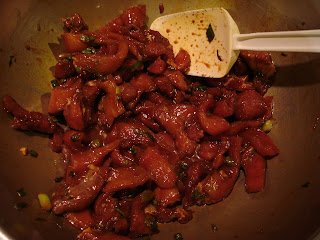 However, before I could add it to the wok, I had to add 1 tbs of water to the pork and mix thoroughly. I have no idea what this step is for. I figured there was plenty of moisture in the marinade already. 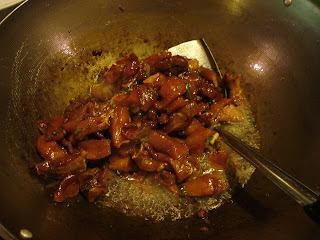 Anyway, the pork is added to the work and stir-fried for 30 or so seconds. 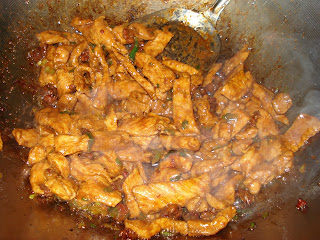 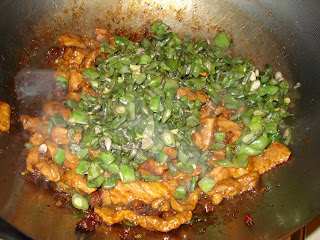 Now the beans are reintroduced to the wok and everything is allowed to cook for another 3 or so minutes, or until the pork is cooked through.

What you end up with is this: 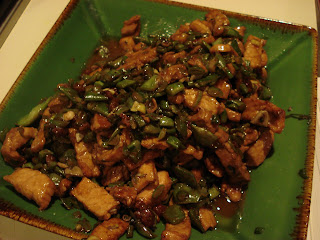 A plate full of pork and beans that doesn’t look all that appealing. 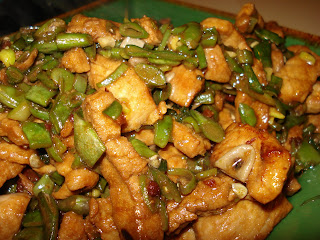 Maybe a closeup will help. I suppose it looks a little better. 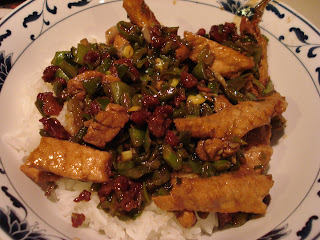 Here we are. Served over white rice and in its natural environment, this dish is a study in simplicity and not at all what I expect from cuisine. It’s more a stereotype than anything but I think of cuisine and numbing peppercorns and copious amounts of chilies. Here, this is a study in simplicity. Including oil and salt, there’s barely 10 ingredients to the dish.

In the preface, Ellen Schrecker writes that “This is the kind of plain meat and vegetable dish that Mrs. Chiang’s mother served her family for dinner almost every day.” I can see why. There’s not much prep work and it’s a quick dish to make. What you end up with is delicious string beans, crunchy rendered pork fat, and silky shredded pork. To me, this is a new side of cuisine, and I’m eager to try more recipes from Mrs. Chiang’s Szechwan Cookbook.

Haha, I love those 70s print Chinese cook books! They were so kitchy and had those airs of mystery about them.

This is a wonderful cookbook. I'm glad you've run across it. I strongly recommend the steamed fish recipe.

This is an absolutely fantastic book, I don't think I've had a single recipe from it turn out badly.

check out the pork, peppers and potatoes dish, yummy!

This book has been the most-used guide in my library since the mid-1980s when I was first introduced to it. The background information is exceptional, the recipes authentic and foolproof. New Chinese immigrant dinner guests have expressed wild enthusiasm and satisfaction, saying these recipes remind them of their own mother's. This is a book that keeps giving, decade after decade; as well, the most appreciated housewarming gift I've ever given.

I have also used this cookbook for many years and cannot live without it. I found this cookbook after returning from a 2 month stay in Taiwan, where I'd fallen in love with the amazing Szechuan food. I can tell you from firsthand experience that this is genuine, that these recipes are the real deal. You should try more of them! I adjust them to my own taste, but the result is always delectable.