It’s been a few years but I first caught wind of Collins Dream Kitchen at a company Christmas lunch. Everyone had signed up to either bring a dish, and while most people made a dish at home, a few people took the easy route. One of those people was a delivery driver who volunteered to bring the cornbread. When I saw the pan, I was a little confused. There were normal pieces of cornbread but a few had oddly shaped lumps coming out of the muffin. I was told those were crackling cornbread muffins, or cornbread cooked with pork rinds. At that moment I felt a surge of pride for the South. Where else does it make perfect sense to throw pork rinds in with your muffins?

Fast forwarding a few years, and I decided it was time to pay a few visits to Collins. If you’re a fan of John T. Edge or “Garden and Gun” magazine, you’ve no doubt seen the list of “100 Southern Foods”. Under the section entitled “Meat”, you’ll see the second entry for Jackson, Collins Dream Kitchen and their Soul Spaghetti; “the best is soul spaghetti, a casserole of dishrag noodles, tomatoes, and hamburger meat, buckshot with black pepper.“


With that description in mind, I was quick to pick out my plate from Collins. 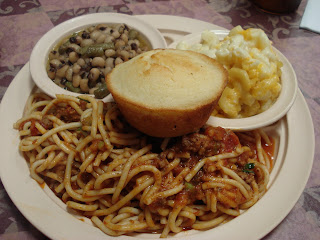 I’m not sure what dishrag noodles are, and I didn’t see any mention of “Soul Spaghetti” on the Collins’ menu, but this was a satisfying plate of food. 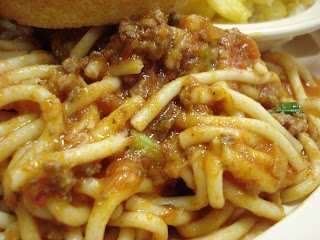 Actually, I’ll be candid, this really seems like cheap filler food, but there’s something to this plate of noodles and meat. 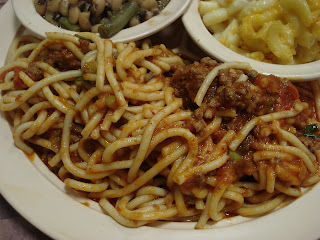 With big pieces of beefy ground chuck, a sauce that seems to be tomato and a few green onions, not very much pepper and little else, this dish’s sum is more than its parts. One thing I found is that it needed a liberal application of black pepper to really reach its potential. That being said I still don’t quite see the allure or its status as one of the 100 Southern Foods to Eat Before You Die.

My side of mac & cheese was much like the spaghetti. 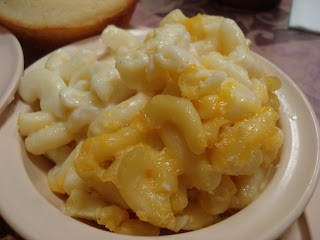 This was as plain as it gets, but it was cheesy, simple, and satisfying. It’s what I expected country or soul food buffet mac and cheese to be like.

Hoping to find the same simple charm with the black eyed peas, I was sorely disappointed. 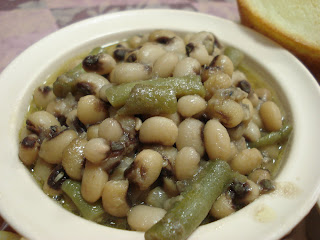 Sure there were snap peas intermixed with the black eyed peas, but it was all under salted and completely overcooked, a real victim of the steamer tray. Well, for $6 a plate, I suppose they can’t all be winners.

Wait, what about the corn bread? 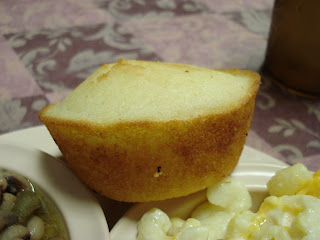 I forgot about the crackling cornbread, so it was just plain cornbread this time. 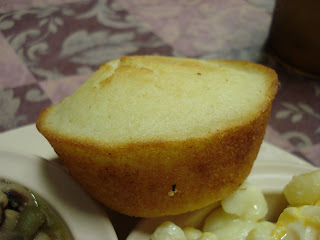 Plain is the word. Just a little salty, and with a good crust, this was an excellent example of southern cornbread.

Since Collins Dream Kitchen was just a short drive from work, and that line of steamer trays needed some further investigating, I was back for lunch a few weeks later. Even though the allure of fried chicken was present, I decided to try a different part of the bird, the chicken livers. 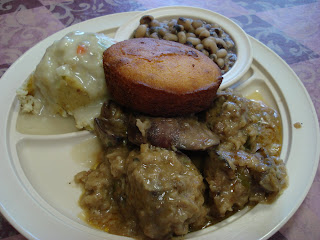 I’m sure some people would get a little squeamish over the idea of eating livers (I know that one postal worker picking up her lunch did) but I’ve really developed a taste for that piece of offal. 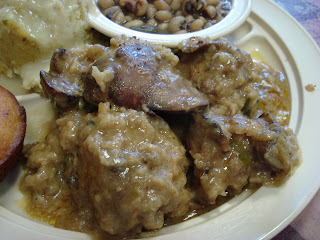 My best guess is that these livers had been pan fried and smothered in gravy like pork chops. At first that pan gravy was as delicious as it is bad for you, but they hid the liver’s dark secrets. 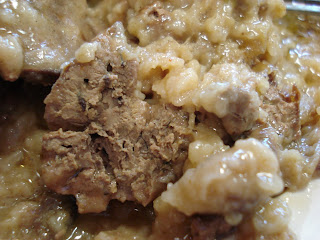 These livers were chalky and overcooked to hell and back, a victim of the steamer tray. It’s hard to do offal right, but it’s even harder to keep it warm and not ruin the texture.

In marked contrast to the chalky livers was the scoopful of dressing on my plate. 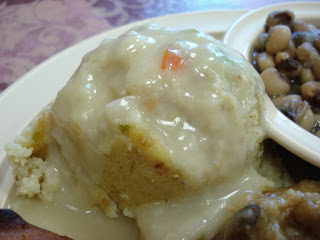 Covered in its own turkey gravy, this dressing was pillowy soft. 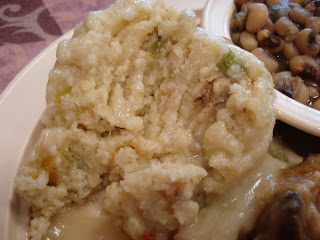 There wasn’t much to this dressing. Subtle flavors, a few errant veggies, this was just chicken stock, cornbread, and gravy and it was silky and delicious.

On a whim, I decided to revisit the black eyed peas. 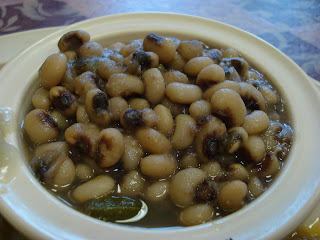 They were still overcooked, and oddly sweet this time.

Of course the real feature of this plate of food is the well browned piece of cornbread on top. 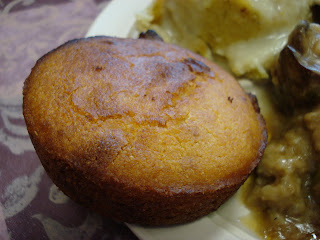 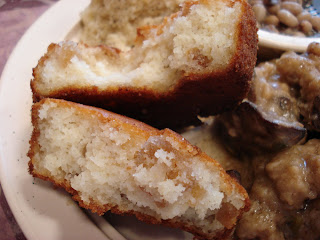 Split in half, you can see a few odd looking pieces in the middle of snowy cornmeal. 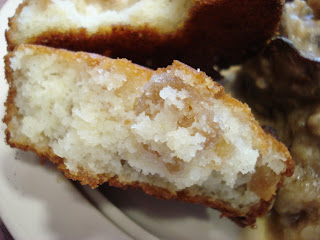 That is a piece of pork cracklings or pork rind, and it is delicious. It’s that classic combination of salinity and pork flavor, a true example of the southern maxim: “When in doubt, add pork.”

That plate full of food should have been completely satisfying, but I just can’t eat overcooked liver. So, while picking up a to go order for a coworker, I decided to give the Collins’ fried chicken a try to go. 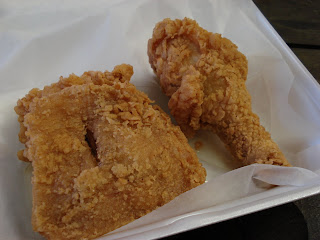 Fresh out of the fryer, I was genuinely excited to try some of Collins’ fried chicken. 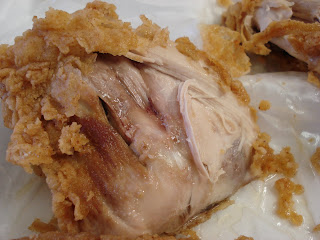 Each piece was certainly juicy, but I was deflated by the lackluster crispy skin. With a floury batter, this skin was certainly crispy but it was all salt and no other flavor. 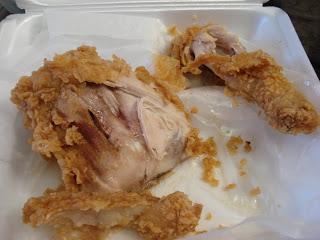 Greasy, fatty, and with no real chicken flavor, I was disappointed in Collins’ fried chicken. However, there is a reason for this. Ever since I had the Mr. D’s fresh fried chicken at the Lorman Country Store, I’ve found every other fried chicken in lacking. That being said, even without the previous memory of Mr. D’s chicken, I wouldn’t go out of my way to eat the chicken at Collins Dream Kitchen.

It’s not a very satisfying finish, but I really didn’t find too many reasons to celebrate Collins Dream Kitchen. Well, I’ll try to think of a few reasons. You do get a fair amount of food for the money, spaghetti and two veggies is only $6. The staff is very welcoming, and there are a few things on the menu that are hard to find around Jackson, e.g. oxtails, chicken livers, and crackling cornbread. The crackling cornbread, that’s the reason to visit Collins. I’m sure there are other places in Jackson, in Mississippi, and in the South for crackling cornbread, but Collins has the best I’ve found so far.