It’s been more than five years since I last ate at South City Kitchen, and I really don’t remember much about the meal. Apparently it was time to refresh my memory. When I was looking for a late lunch spot on the way out of Atlanta, South City Kitchen fulfilled all the right criteria; it was off I-85, it was open after 2pm, and it was on Open Table. No reason to miss an opportunity to accrue some more points

Looking through the lunch menu, I saw a number of dishes I’d like to try, but most of them were a little on the heavy side. There’s nothing quite like eating a rich meal and then trying to drive the same six hours on I-20, but I decided to get it a try anyway.

Chosen from the First Flavors section of the menu, the Pan Fried Chicken Livers were the first dish out of the kitchen. 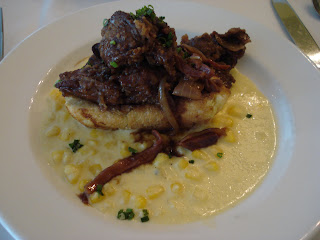 Plated with country ham, caramelized onions, toasted brioche, creamed corn and garlic jus, this seemed like a busy plate. However there weren’t any real muddled flavors. Every flavor shone through, but they didn't always sync. What really surprised me was how much these tasted like those slightly sweet chicken nuggets from Chik-Fil-A. It really was uncanny. 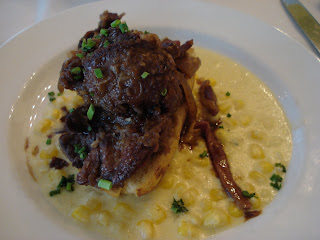 Fast food similarities aside, the livers were sweet with very little mineral taste, and while the rest of the plate does seem to occasionally be at odds, it all works. If there is a real downside to the dish it’s that the livers aren’t crispy, but even pan fried this is still an excellent appetizer.

Apparently a garlic jus for lunch just isn’t enough, I needed more garlic. Looking to try one of the house specialties, I skipped the fried chicken and went straight for the Sauteed Shrimp & Scallops with creamy stone-ground grits and garlic gravy. 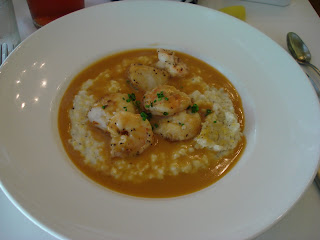 The immediate surprise was just how subtle the garlic gravy was. When I see something labeled as garlic gravy, I almost expect a whole bulb of garlic to be floating by. 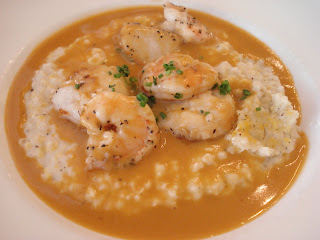 For as often as I eat grits, I still haven’t quite acclimated myself to eating stone-ground grits. These were excellent grits, but I just can’t shake the idea that they are undercooked. 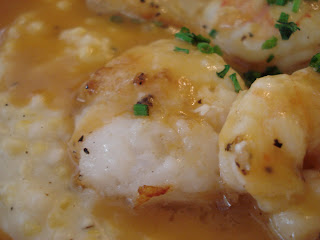 Moving on to the seafood of the dish, the shrimp were fantastic, perfectly cooked and succulent. The scallops were quite good as well, but I can’t help but think they would be better if they were seared first.

Even with my double dip of garlic, I’m happy to report that there was no drowsiness on the ride back to Jackson. Instead I spent most of the drive thinking about how good my meal was at South City Kitchen. True I did devote a fair amount of time pondering how I would change/improve each dish, but I really can’t complain. South City Kitchen was open when I needed them to be, they provided a very tasty lunch, and my waitress was great. I can only hope that my next meal happens sooner than 2015.