I realize it’s a parody but there are few things that get me more in the mood for bbq than this song. With The BBQ Song, Rhett and Link make a pretty fair assessment about bbq across the South, but I always get hung up on their description of . “Pork shoulder is the cut of choice in , and they pride themselves on BBQ that’s totally vinegary.” Now, I may be looking a bit too intensely at a song sung by men with fake beards, but it certainly inspired me to seek out some que in .

Lumpkin’s has been on my “must visit” list since I tried a few of their ribs at the Belhaven Farmer’s Market. Of course that’s been more than two years ago, but reports from other outlets, Carpe Jackson and Eat Jackson say the bbq is still topnotch. Well, I figured that I’ve been delaying my next bbq post for long enough, so with Sam in tow, we set out to asses the offerings of Lumpkin’s.

One thing that’s been keeping me from visiting Lumpkin’s is their buffet setup. I know that buffets are a Southern favorite, but I’ve had more bad experiences than good with that line of steamer trays. I was even more apprehensive when I saw it was all you can eat for $8. Either Lumpkin’s is operating on a razor thin margin or there’s something iffy about their product.

With our plates in hand, Sam and I made our walk down the buffet line, stopping only to wonder which container was the bbq sauce. A quick question for the cashier answered our question, and we made it to the table to survey the spread. 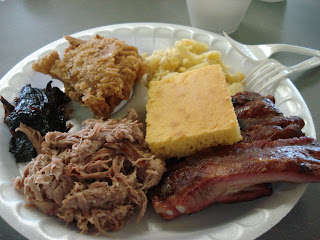 It’s not a bad sampling for the first plate, but I was most interested in the ribs. 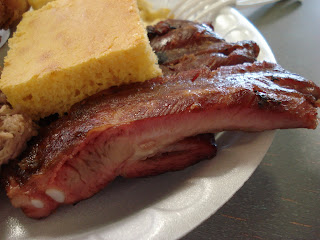 Smoked with hickory wood, they looked the part. 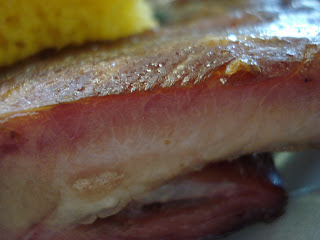 Yes, you can see that wonderful smoke ring. Thankfully the taste was there as well. Truthfully, they were a little greasy but that was overshadowed by the great combination of pork and hickory smoke. Curious about the sauce, I dabbed a rib or two in it and came away completely puzzled. The sauce was sweet, too sweet. It almost tasted like pie filling.

Moving on to the pulled pork, the quality of the bbq continued. 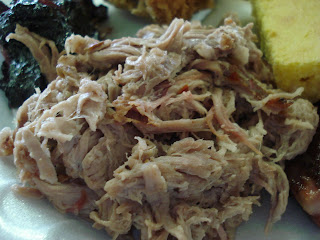 Tender, a little greasy (but it is pork shoulder), and with a more subtle smokiness, the pulled pork was well complimented by the sauce, a much better combination than the ribs. One thing that surprised me was the lack of flavor outside pork and hickory. Most of the time pulled pork has a residual rub flavor, not on every piece but at least some of the crust.

Taking a quick break from bbq, I turned to a piece of fried chicken. 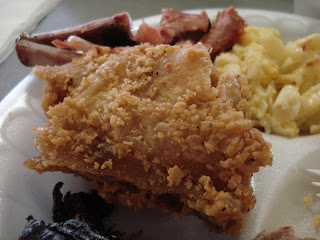 There’s really not much to say here. The chicken, while well fried, was under seasoned and generally underwhelming. Granted, I compare every fried chicken in to Mr. D’s at the Lorman Country Store. That might be an unfair comparison, but I will say that Lumpkin’s makes a pretty solid fried chicken. It’s not something I’d drive 3 hours to eat, but not bad for around the corner.

You might be wondering what this charred nugget is. 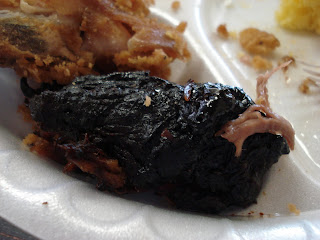 Well, when I saw a tray of these on the buffet, I was floored. I suspected this to be a burnt end from the brisket. You just don’t see these very often, and for good reason. The burnt ends of bbq brisket are so full of smoky beef goodness that most people shrink in fear at the first bite. I later confirmed that this was a burnt end, but soon found that the people at Lumpkin’s prefer the term caramelized.

The burnt end marked the last piece of the first plate, and with room to spare, Sam and I went back for seconds. This time I was able to get a taste of the normal cut of brisket. 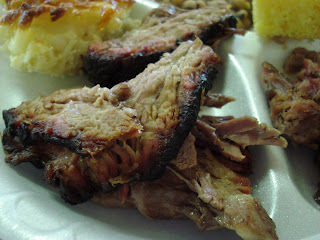 I’m curious about how Lumpkin’s cuts their briskets. Instead of the long slices I usually see, this were much shorter, almost like the brisket was cut in half or even thirds. 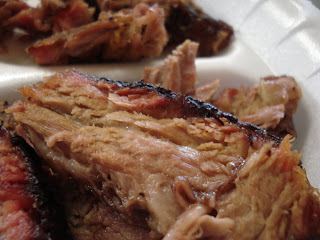 Still, the smoke ring is there and the brisket was fall apart tender, literally. I actually had a hard time getting my first bite; the brisket kept falling apart. One thing I picked up on was how the hickory was much more subtle here than with the pork ribs or even the shoulder. Even though I generally prefer mesquite with my beef bbq, the hickory smoked brisket at Lumpkin’s was excellent. Maybe their claim of best brisket in isn’t so far fetched.

Unfortunately all was not well at Lumpkin’s. The mac and cheese was the first of these casualties. 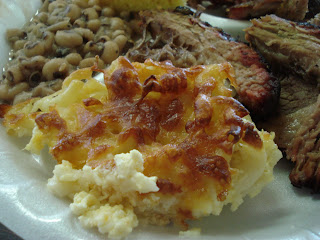 I had tried a spoonful on the first plate and was appalled. When I went for the second plate, a brand new tray was out. Hoping things would be better, I took a helping. There’s just nothing here. The noodles are overcooked, there’s no flavor to the cheese, there’s nothing.

The black eyed peas were next in the misses column. 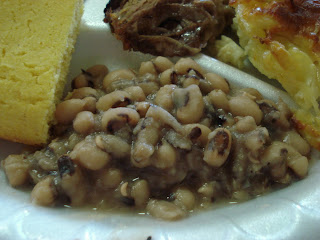 There’s not much to say about these peas, they were completely forgettable.

I’ll at least end on a slightly sweeter note. 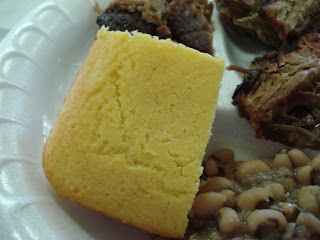 With so much bbq on the buffet, I expected there to be slices of white bread at the end. Instead, there was a big tray of cornbread, and this wasn’t too bad. The cornbread wasn’t dry, but it was oddly sweet. This was like a taste of DC. I’ve never had sweet cornbread this far south.

While making a few to go boxes for coworkers, Sam and I got in a conversation with Monique Davis, the owner of Lumpkin’s. Apparently there’s a perfectly good reason for the vegetables tasting so bland. In an effort to make things healthy, broke the cardinal rule of Southern cooking and left out the pork. I’m a bit perplexed by that idea. I admire her goal of making things healthy but when you serve plain veggies beside a mountain of bbq meat, it seems like you’re shooting your right foot to save the left. Regardless of the vegetables, Lumpkin’s serves up a quality selection of BBQ and is definitely worth a visit.

Make sure you go hungry