It’s that time again. My sister has decided to move to another apartment. What does that mean? That means eventually the whole family will end up in to help. Well, I decided to head over a day early, but come Friday the parents made it to town. After moving the washer and dryer, it was time for dinner. Of course all eyes turned to Jennifer, who immediately suggested Dogwood. It doesn’t take much to persuade me to try a new restaurant, but promises of quality terrines and a grit bar (whatever that is) can only help to seal the deal.

Once we were seated and handed the menu, the grits bar began to make more sense. With Red Mule grits from as a base, you get a choice of three toppings, pork belly & chow-chow, pimento cheese, and crawfish butter. Since pork belly is irresistible, that was my choice. 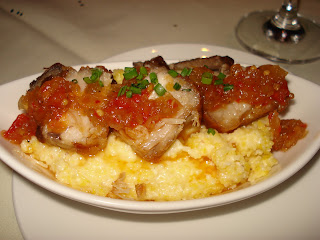 It certainly looks interesting, like someone put salsa on top of grits and pork chops. The chow-chow was actually quite sweet and served cold. 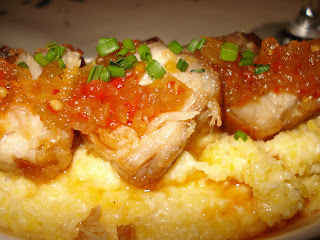 The pork belly was damn close to perfect. Each piece had a beautiful crust with tender, well cooked meat inside. When you combined the belly with the grits, everything tasted divine. Even with the combo of pork and grits, there didn’t seem to be much cohesion to this dish. Separately the components were excellent, but the chow-chow seemed like an afterthought addition.

Annoyed that the terrines were no longer available, I decided to take out my frustration by ordering the sweetbread appetizer. Pan fried and served with fresh peas, wilted arugula, ’s bacon, trumpet mushrooms, sherry brown butter, and a quail egg, this seemed like a very busy dish. 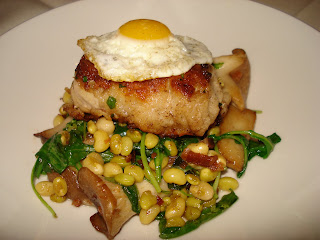 The sweetbreads had a very thick crust, and were actually quick thick on their own. I soon noticed that the sweetbreads had a poor surface to mass ratio. If something’s pan fried, I want more crispy crust than what I got here. Still, they were quite tasty. As for the rest of the dish, the beans were small but uncooked and with a definite bacon taste. Speaking of bacon taste, I was surprised at how subtle the flavor was. Usually ’s bacon will completely dominate the dish, but at Dogwood they’ve learned to use it as an accent, and it’s a refreshing detail.

Looking to break my pork addled trend, I took Aaron’s recommendation and ordered the Georgia Trout. Again pan fried, this fish was served with herbal cous cous and a blistered tomato vinaigrette. 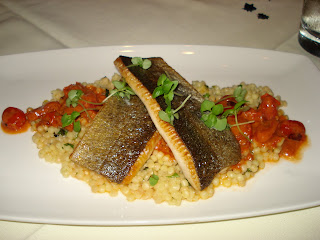 Well the skin of the trout was definitely crispy from the pan frying but the meat was dangerously close to overcooked. 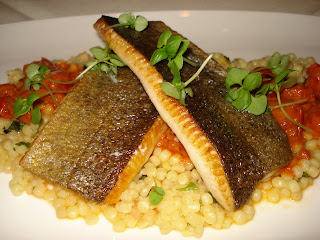 Actually the fish seemed to be missing something and it quickly took a backseat to the cous cous and vinaigrette. The cous cous was creamy and full of lemon flavor, and that vinaigrette. 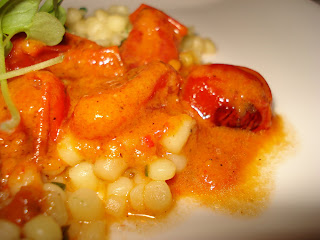 I’d love to know how this was done because the lemon from the cous cous and that subtlety of the burnt flavor from the tomato was an excellent combination.

Billed as upscale Southern cuisine, I wasn’t exactly sure what to expect from Dogwood. They certainly have the amenities in place. The staff is friendly and prompt and the open kitchen is always a welcome sign. I still can’t get behind the combination of pork belly, grits, and chow-chow, but it’s hard to go wrong with well cooked pork and grits. The fish was also a minor let down, but not as much of a letdown as the missing terrines and charcuterie. Even with a few faults, I wouldn’t hesitate to stop at Dogwood before an event at the Fox, but it will be a little while before I go out of my way to return.