The first time I cooked from Taekyung Chung’s “The Korean Table” was to satisfy a craving for Korean bbq, particularly kalbi. An integral part of that recipe was the marinade and that required the construction of a batch of sweet soy base sauce. Since that recipe for kalbi only used 2/3 cup of the 6 cups of sweet soy base, I’ve been occasionally thumbing through “The Korean Table” trying to find another recipe that used the sauce. Well, a few weeks ago, I found one that fit the bill, Pork Ribs with Fresh Ginger or Jeyook Kalbi Chim.

This is not a complicated recipe. Looking through the ingredients and instructions, it seems like a sort of stew, something perfect for winter time. Seeing as it’s a constant 90+ degrees outside, this dish may be a little a seasonal, but I’ll still give it a try. 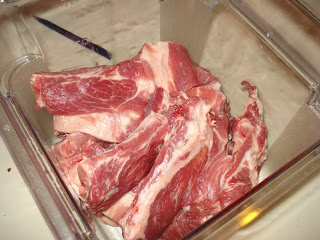 Oddly the first step to the recipe is to separate your 2 ½ lbs of meaty pork ribs into individual ribs, put them in a large bowl, and cover them with water and let sit for 20 minutes. Apparently this will draw off the excess blood from the ribs.

With the 20 minutes up, the ribs were drained, the soaking liquid thrown away and the ribs added to a large pot. 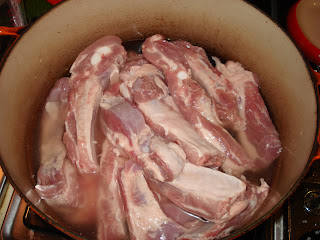 First 2 ½ cups of water were added to the pot. 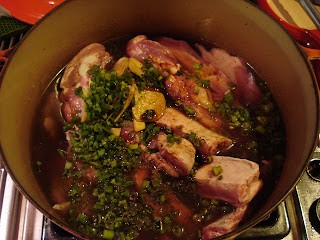 Next the sauce ingredients were added in. 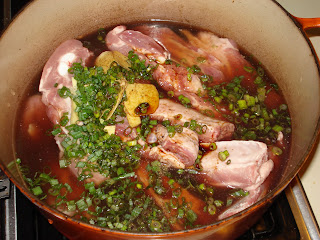 The sauce consisted of ¾ cup of the sweet soy base sauce, ½ cup of minced green onion, 2 oz of peeled and thinly sliced ginger, ¼ tsp black pepper, and ½ cup of wine, red or white.

A lid was added to the pot and the whole mixture was brought to a boil. I lowered the heat and simmered the ribs for 30 minutes. This gave me plenty of time to do the rest of the minimal prep work.

30 minutes of simmering later, it was time to look at the ribs. 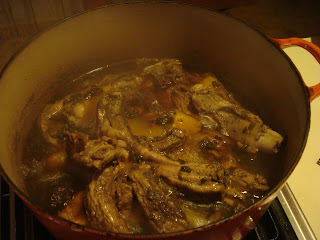 To add to the stew like consistency, a number of root vegetables were added to the pot. 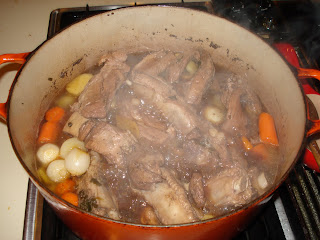 ¾ lb of potatoes cut into 2 inch cubes, 4 carrots peeled and cut into 2 inch pieces, and 7 oz of peeled pearl onions were added to the pot. This was all allowed to simmer for another 10 minutes or until the potatoes were soft.

10 minutes later, as if on cue, the potatoes were ready. 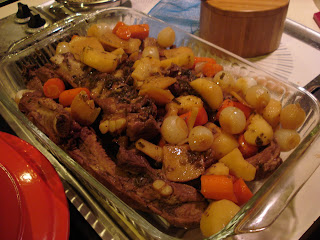 Everything was fished from the pot and I did my best to skim the oil from the surface. 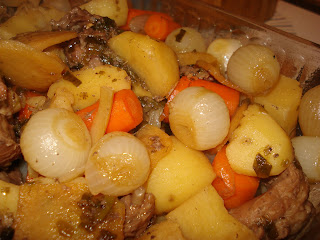 For the next 5 to 10 minutes, I put the pot back on medium high and tried to reduce the sauce. However a hungry audience kept me from reducing as much as I wanted. 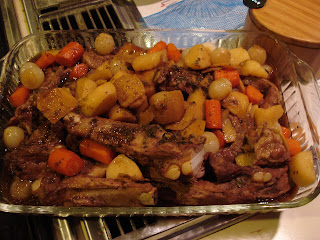 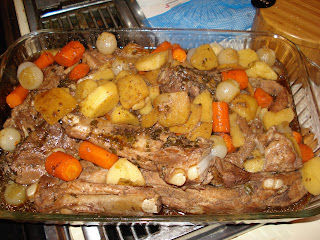 It really is a big underwhelming.

Served over white rice, I was a little disappointed in this dish. 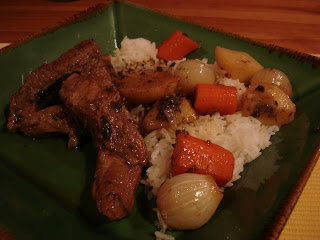 In my limited exposure to Korean cuisine, there have been a lot of bold flavors. 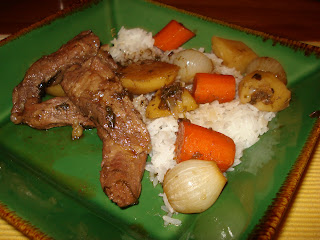 There was a nice Asian undertone to the dish, but I really found it to be a little too bland. However the hungry masses disagreed. They declared the dish a rousing success, but agreed it would be better suited for winter.

That’s only two recipes from “The Korean Table” and I can’t say that I’ve been entirely impressed. The kalbi was an outright success, but this dish left me wanting. However, I can see how these ribs would be immediately comforting to someone who was raised on them. Either way, I think the next recipe I try from “The Korean Table” will be more along the lines of Korean bbq.

*sigh* if only Jackson had a Korean restaurant...bulgogi sounds pretty good right about now!

Yep, it's a shame that the nearest Korean restaurant is on the coast. At least, I finally found a grocery that sells Korean ingredients. It's only been in Jackson for 10 years.