As much as I enjoy exploring various cuisines, I’m a little late to the party when it comes to Indian food. I’ll chalk that up to a childhood spent basically avoiding the food at all costs. When your mother abhors the cuisine, you don’t get many opportunities to try it when you’re growing up. Now I’m doing my best to make up for lost time, and that of course means trying my hand at cooking an Indian dish or two.

The first problem is where to find a good recipe. It seems that for most cuisines there are a few tomes that everyone can agree upon. If such books exist in the world of Indian cuisine, I haven’t found them. Not knowing where to turn, I decided to see what had garnered the most praise on Amazon. One name kept turning up, Madhur Jaffrey, an award winning actress and cookbook author. When I found her book, “An Invitation to Indian Cooking”, I figured it was a good place to start.

With a recipe source in hand, I now had to figure out what to cook. Since I still had some Flying M Farm ground lamb in the freezer, I thumbed to the index to find the lamb recipes. I eventually settled on a Kheema recipe, a dish that Jaffrey says is the “first Indian dish all Indian students abroad learn to make.” So I was set with my recipe for Kheema with Fried Onions, now I could start my foray into the world of Indian cuisine.

As with any recipe, the first step is culling together all the ingredients, and there are a fair number in this dish. 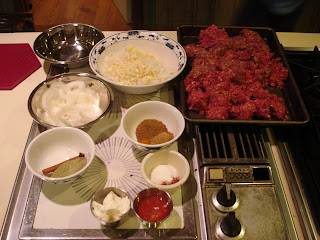 That’s everything and now to explain what everything is. At the top left is a ½ cup of water. 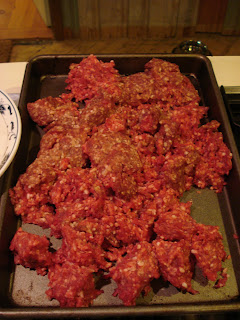 Next is two pounds of Flying M Farm ground lamb. 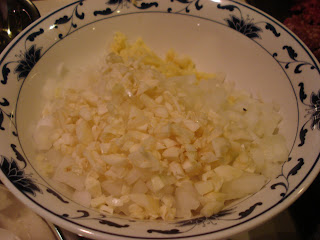 Then 2 medium onions, finely chopped, 5 cloves of minced garlic, and a 1 inch piece of ginger chopped. 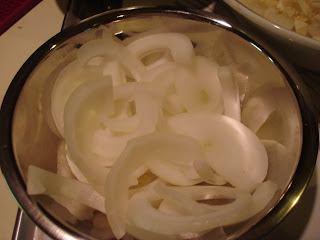 A medium sized onion sliced into thin rings gives this Kheema its name. 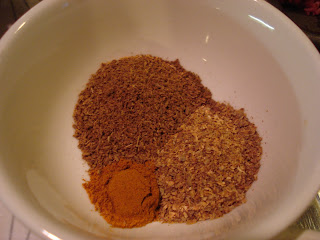 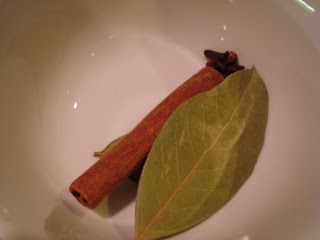 Continuing with spices, we have 2 bay leaves, 1 3 inch cinnamon stick, and 6 whole cloves. 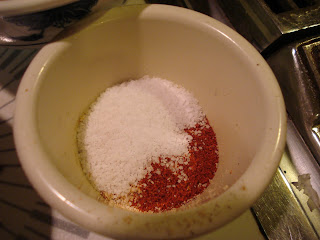 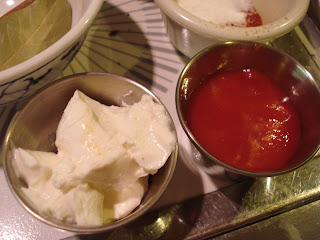 Of course, I can’t forget the 2 tbs of plain yogurt (fage) and 2 tbs of tomato sauce.

With all the ingredients at the ready, I now start preparing my first Indian dish. 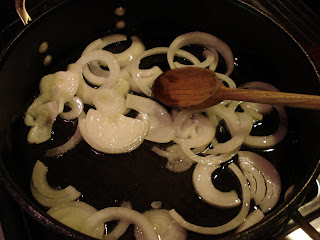 The first step was to fry the halved onion rings in 4 tbs of oil over medium heat for 5 or so minutes, or until they were a dark brown. 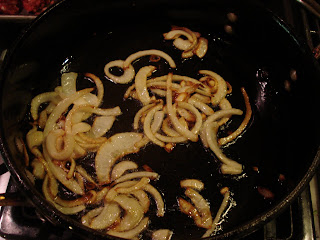 It took me a fair bit longer than 5 minutes, but I eventually got the color I was looking for. 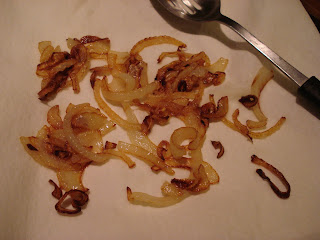 At the time this seemed like a really unnecessary step to recipe.


Now the onions are fried and set aside, so I can start building this Indian version of Chili con Carne (sans the chili powder) 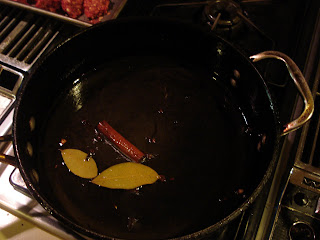 Using the same oil I used to fry the onions, the bay leaves, cinnamon, and cloves are added. I was looking for the bay leaves to darken and the cinnamon to uncurl a little. 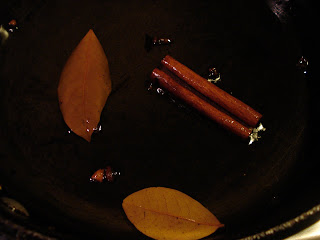 Something like that. I like to point out how odd it is frying bay leaves and cinnamon sticks for the first time. 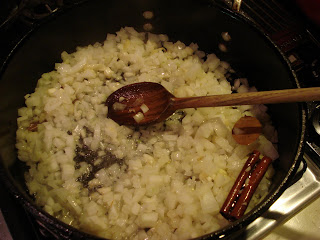 Still frying over medium heat, the idea to cook this mixture for about 12 minutes or until the onions start to turn brown. 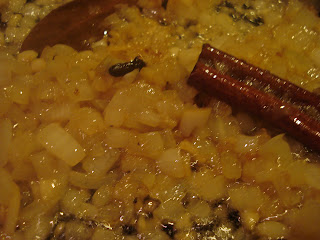 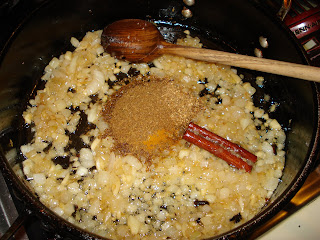 After frying and constantly stirring for 2 minutes, the look of the pan has changed dramatically. 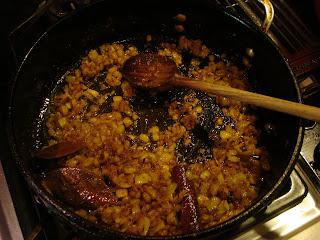 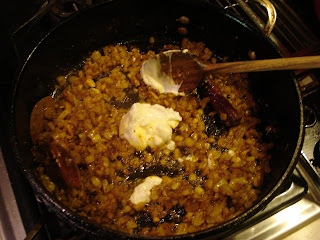 2 tablespoons of Fage go into the pan. 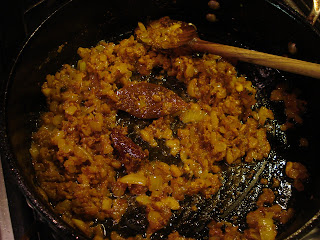 After a minute of frying, I would be hard pressed to notice any signs of the yogurt. 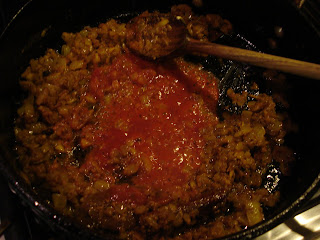 Last ingredient before the lamb is the tomato sauce and that’s fried and stirred for another two minutes.

The lamb is the next ingredient in the pan. 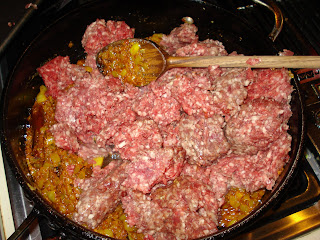 Which leads to more frying and stirring. 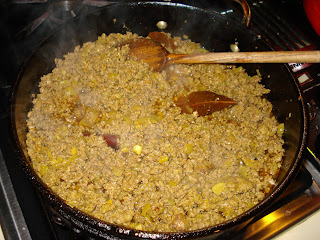 After a good 8 or so minutes of frying & stirring, the lamb has brown up and this dish is really starting to take shape. 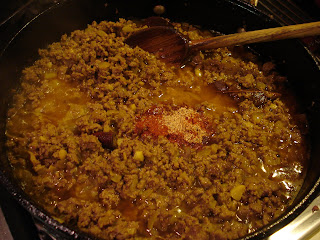 The ½ cup of water and the last spice mix of mace, nutmeg, salt, and cayenne are added to the pan. The whole concoction is brought to a boil, turned to low, covered and simmered for an hour.

Of course, you just can’t leave this dish to its own devices. Jaffrey recommends stirring every 10 minutes, but after an hour, the dish looks like this. 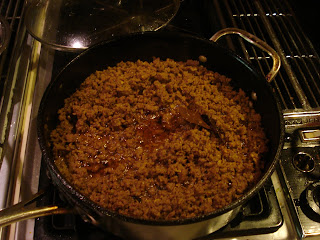 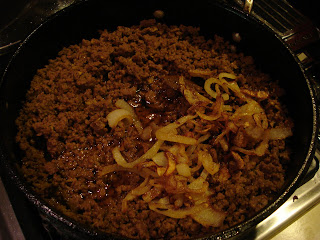 The now flimsy fried onion rings are added to the pan, the bay leaves & cinnamon fished out and everything is given a good stir. 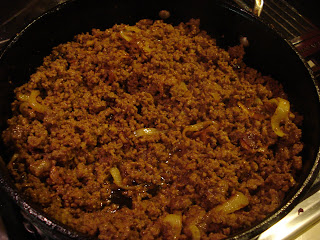 Jaffrey recommends a variety of serving options: rice with spinach, potatoes with asafetida and cumin, green beans with ginger and so on. I decided to go the simple route. 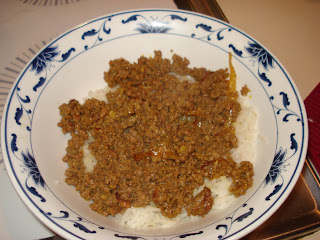 Served over nothing but well cooked basmati rice, I finally tasted my first try at Indian cooking and I was quite happy. You would think that with so many flavors, it would be a mud puddle of flavors. Instead, everything worked in perfect harmony to create a simple, yet hugely satisfying dish. I can see why this is the first dish Indian students make away from home. 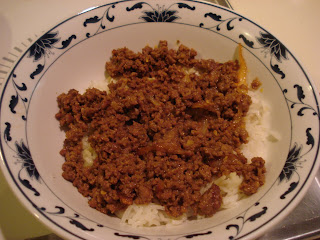 Now I can only hope my further explorations into Indian cuisine are as successful, but with Jaffrey’s recipes, I see smooth sailing ahead.

In the years when India Palace/Rucchi was rather disinclined to act as an actual restaurant (but insisted on remaining open anyway), I attended a conference in NYC. My only goal was to score some good Indian food. I ended up walking from Times Square to the Upper East Side to Dawat, a restaurant which claims Madhur Jaffrey as a consultant. The walk took forever (who knew NYC was so big?) but at the end I was rewarded by some incredible food.
Shortly thereafter, we got a new Indian restaurant in Jackson that somehow morphed into Last Call. Then Spice Avenue opened. But I have Jaffrey to thank for a great Indian meal at a time when it was impossible to get one in Jackson.