When it comes to feeding a large number of people, there are really few things as indispensable as a pork roast. A pork roast or pork shoulder or Boston Butt is relatively cheap, full of flavor, and seems to take well to seemingly any spice profile. Well, I had picked up a duo of Boston butts from Paul Anthony’s and now I needed a crowd pleasing recipe. I could have done another porchetta like the recipe I tried from Donald Link’s “Real Cajun”, but I wanted something spicier.

Conveniently, I had recently picked up a copy of John Folse’s heavyweight “The Encyclopedia of Cajun & Creole Cuisine”. At more than 800 pages and weighing as much as a cinder block, sure Folse had a recipe that would fit my criteria. After a quick flip to the index, my salvation had arrived in the form of Pepper-Laced Pork Roast. Sure I would need to do an odd substitution here and there, mainly to use what I had on hand, but how can you go wrong with pork and a massive amount of chilies?

After a quick search around the pantry, fridge, freezer, and garden, I had my ingredients assembled. 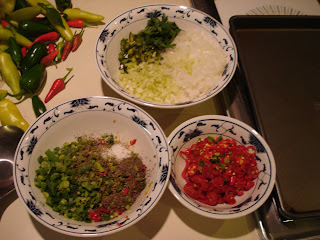 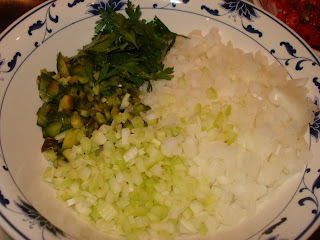 Working from the top is a bowl of 2 cups of diced onions, ¼ cup diced celery, ¼ diced bell pepper, and a ¼ cup of parsley. 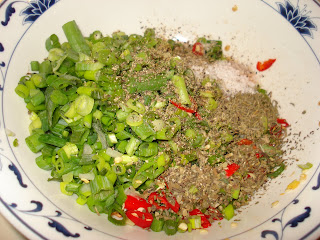 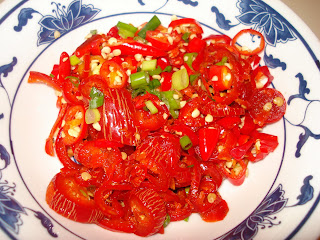 Last is the bowl with all the kick, ¼ cup of sliced jalapenos and ¼ cup of super chilies. Now the recipe actually calls for cayenne peppers, but I had a super chilies that were picked that morning and there was no sense in wasting them.

Moving to the feature of the recipe, it’s the Boston butt. 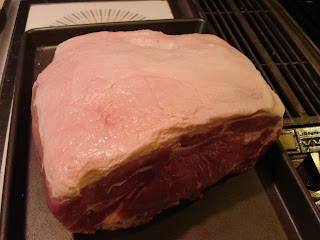 That’s 5 or so pounds of pork shoulder. 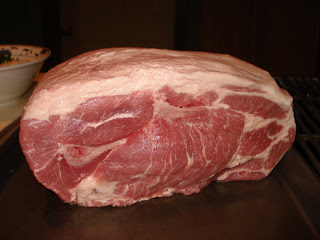 It doesn’t look too shabby. 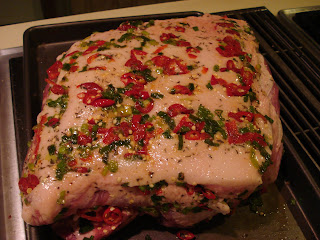 I don’t know where the hell you get 2 inches of exposed peppers when you’re working with sliced specimens. Double trouble, I can’t imagine that using halfway thawed jalapenos was what Folse had in mind. 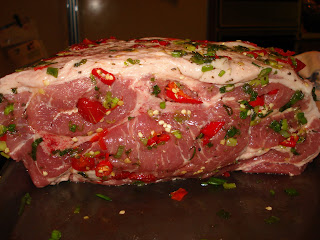 Yes, I made sure to get every part of the roast.

In what seems like overkill, the next step of the recipe is to season the roast with hot sauce, salt, and pepper. 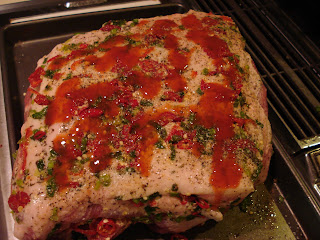 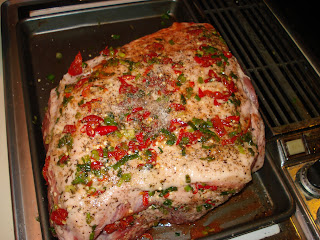 And there’s the salt and pepper. This is a eye burning mess, and yes I forgot to wear latex gloves.

Now it’s time to build flavor. With my dutch oven on medium high, I added oil and set to searing the roast. 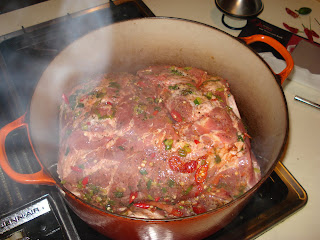 Of course, with a layer of peppers and hot sauce on the outside of the roast mixing with hot oil, I essentially peppersprayed myself. Yep that hot sauce aerosolized and choked the entire house. 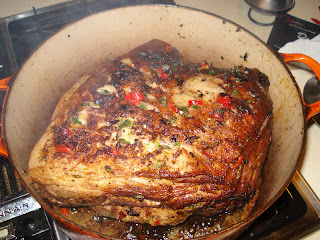 Searing a roast is really tedious, but the results are worth it.

With the roast seared on all sides, it’s time to get this pig ready for the preheated to 375 oven. 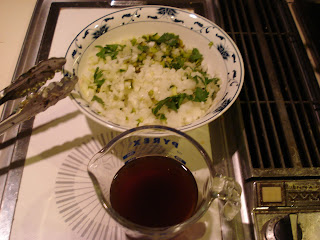 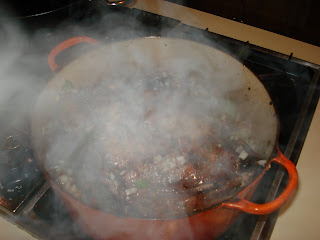 Naturally much steam was made. 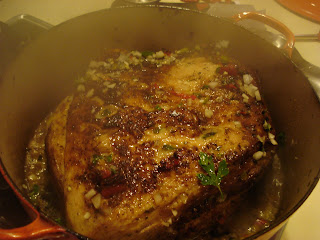 Then it was cover, pop in the oven, and bake for 3 ½ hours or until tender.

Sometime later, I took the roast out of the oven to see what was going on. 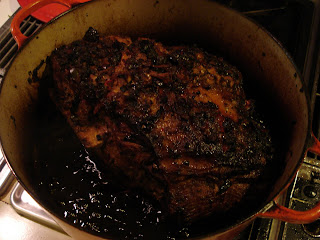 Yep, it looks burnt to a crisp. 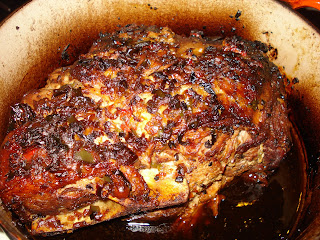 Well, some of the peppers look a little overdone, but the roast, on the whole, looks great.

With serving instructions in the recipe, I did what any person would do when presented with a joint of slow cooked pork, I shredded it. 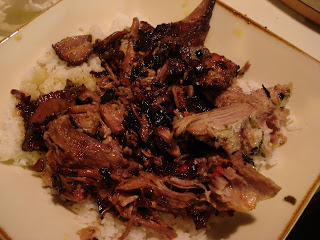 Served over some fresh white rice and with a spoonful of the sauce, it was a little overwhelming. 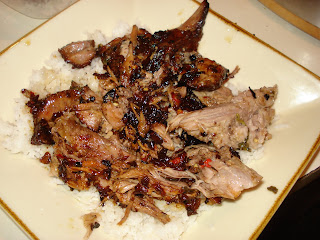 There was a wonderful flavor here, but I’ll readily admit the heat was not for the faint of heart. With the combination of jalapenos, super chilies, and hot sauce, the heat hit you from all angles. There was an initial heat, a middle and then a lingering tail that only made you want more. Sure working with this many chilies makes for a sometime hazardous workplace, but it was completely worth it.

What about Chef Folse and his Encyclopedia? Well, I have no idea how many recipes are actually in this tome, but I’m sure it’s enough to keep me entertained for quite some time. At the very least, this recipe for Pepper-Laced Pork Roast has been quite the auspicious beginning for me and the “Encyclopedia of Cajun & Creole Cuisine”.