Even though Asian is my go to choice for a meal in , there are times when I want something different, something besides the ever familiar flavors of soy and sesame. Of course, working downtown leaves you without any Asian options at all. So those days that I want something more Western, I often turn to what downtown has to offer.

Inside not much has changed since Tye’s occupied the space, at least as far as I could notice. The wait staff now sports t-shirts with the logo instead of the white oxfords before. Another difference is you now order at the bar instead of table service which means you get your lunch that much faster.

Anyway, it seems there’s no better place to start than with a burger, a bacon cheeseburger. 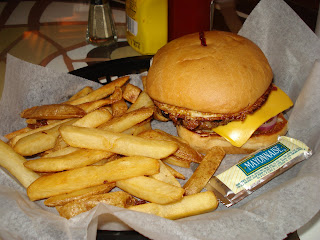 At , this burger goes by the name The Reggie St. Burger and is your standard bacon cheeseburger but with the addition of a fried egg. With a big, char grilled patty and a doughy and oddly sweet bun, this looks like your average burger. One immediate complaint is that egg is completely overcooked. I know people get a little odd about undercooked eggs, but a sunny side up egg is worth the effort, especially when it tops a burger. 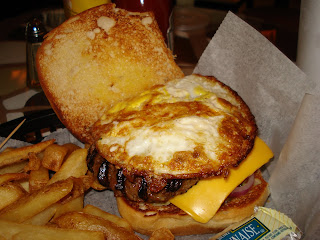 The burger is also on the overcooked side, but again people give you a funny look when you ask for a medium rare burger. As far as the bacon in this bacon cheeseburger, it’s underwhelming and gets completely lost in the fray.

What’s a burger without a side of fries? 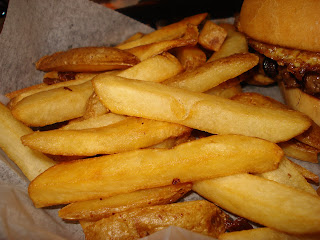 Well, I’ll be honest, these are some plain jane fries. Yes they were decently fried with most pieces getting that crispiness that I look for, but there was no seasoning at all. Without salt, these fries are just pretty to look at, but not worth eating.

Suffice to say, my first experience at Congress Street Bar & Grill wasn’t a favorable one. I came away completely underwhelmed but with a measure of optimism. When I asked about the egg, I was told that I can have the egg cooked to order, something to keep in mind next time. Even with a relatively limited menu for lunch, I knew I couldn’t judge Congress Street B&G on just one burger, so I made sure to pay them another visit.

Looking to stray from the idea of a burger for lunch, I decided to see how ’s pastas measure up. 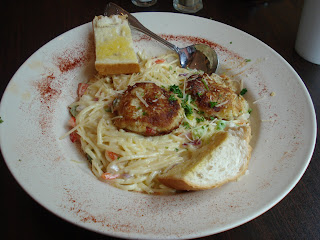 Here’s an order of the crabcake pasta, and what a bowlful. What better for lunch than a big bowl of creamy pasta? Actually, this really was a well made plate. 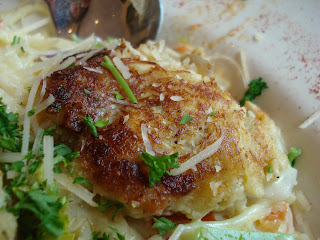 Though on the small side, the crabcakes were full of big chunks of vegetables and lots of crab meat. True the crab meat was a little stringy but there was a lot of it and it made for a pretty great pasta topping. 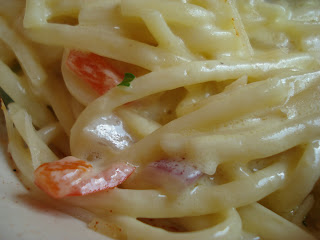 The big chunks of veggies carried over into the pasta sauce. With pieces of onion, tomato, celery, and peppers littering the plate, you almost don’t feel guilty about ordering this for lunch.

So with the pasta having been a successful venture, there was only one real section left to investigate, the sandwiches. Actually there was a section of salads, but you get the same choice of toppings as with the pastas, but no cream based sauce to make everything better.

As with the pastas and salads, you get a choice for your sandwich, crabcakes, shrimp, chicken tender, and catfish. Actually there were a few more. offers a Club Sandwich, a Pulled Pork, and a daily special. On that third day, the special sandwich was a Sausage Po-boy. 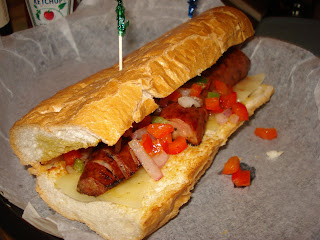 With sausage plit in half, grilled, and served on French bread with sautéed peppers and onions, this sandwich begins to blur the line between a sausage po-boy and sausage sandwich. At what point do you draw the line? Is it the French bread, the sausage and peppers, or the fact that this sausage could have been either a kielbasa or andouille? 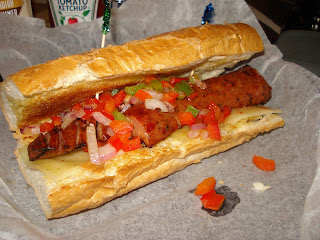 Actually, this is more a sausage sandwich than a po-boy, especially with a layer of cheese on the bottom. Regardless of its nomenclature, this was a tasty sandwich, but I kept wishing for a ladle of marinara sauce to compliment the rest of the ingredients.

Feeling I hadn’t given the Congress Street burgers a fair shake, I decided to see if things would be better with the President St. Burger. 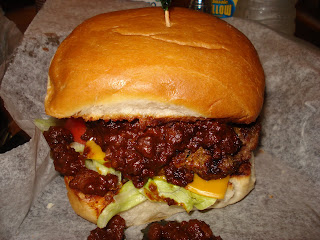 A chili cheese burger can be a sublime combination. With the right amount of chili and cheese, the two can turn a humble patty of select ground beef into a dish worthy of the gods. 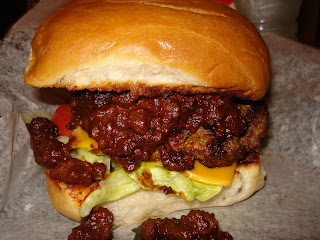 While this is far from a plate of nectar and ambrosia, this is a pretty good burger. The chili is quite dark and pungent with the smell cumin and chili powder. 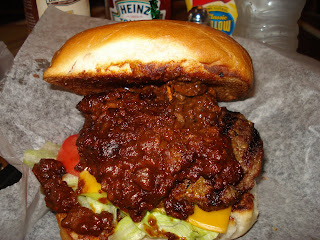 Even though the chili tastes like it’s been cooked for too long at too high a temperature, it works with this burger. The chili compliments the beef and with the addition of a slice of classic American cheese, you get a decent combination.

Actually the President St. Burger really sums up The Congress Street Bar & Grill. At lunch, this restaurant is designed for fast, efficient, and relatively tasty food. I doubt they’ll be nominated for a James Beard award any time soon but with a healthy lunch crowd, this is a good option for a quick meal. While that covers lunch, I still need to explore for dinner. With a chalkboard of weekly specials taunting me by the door and a few interesting appetizers available only after 5pm, Congress Street B&G is worth a look for dinner, but I’ll save that for later.