The Blue Rooster has actually been on my list of places to visit for months, but I’ve used it’s location as a convenient excuse. Even though Flora is only a 15 minute drive from , I never think of going there for dinner. Well, it was time to change that. So Alvin and I hit highway 49 and went looking for The Blue Rooster.

After navigating the “expansive” downtown of Flora, we found roadside parking and made our way into The Blue Rooster. It’s not a large restaurant by any means; I think max capacity was 45. With a mix of booths, barstool tables, and sport paraphernalia, I could see this being a decent place to watch a game, minus the obscenely large tube tvs.

Anyway, appetizers were ordered and soon brought to the table. 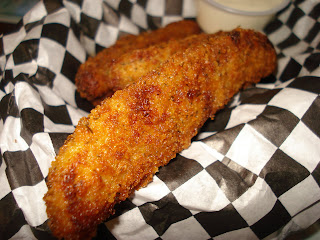 ’s Fried Dill Pickle Spears were the first appetizers. Served with a choice of ranch or Hollerback (I assume it’s their take on comeback), this pickles had a really nice breading. Well seasoned and well fried, they went perfectly with the ranch.

For some reason I can’t quite remember, I decided that it was a good idea to order the egg rolls, Asian style. I completely ignored the fact it was the only Asian thing on the menu. At the time it made sense to order eggrolls at a burger joint. 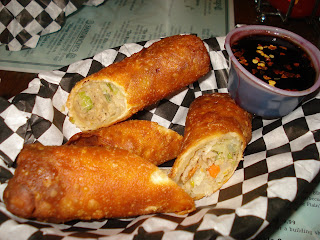 Well, here they are, and I have to admit, they are well fried. 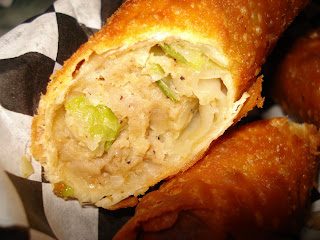 Actually these struck me as the best buffet eggroll I’ve ever had. Yes, the filling was all cabbage. Yes, there wasn’t a lot of meat, but they weren’t greasy and the wrapper was crispy. 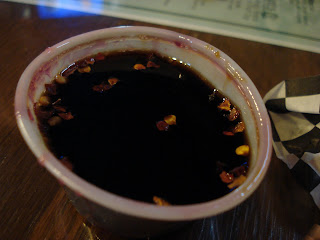 I will make fun of the dipping sauce. This is nothing much than a small cup of La Choy soy sauce with a few chili flakes thrown in. There’s nothing like soy less soy sauce from to make you feel extra vanilla.

Moving past the appetizers, it’s time for The Blue Rooster’s raison d’etre, the burgers. ’s burger made the first appearance; this burger is called The Big Nasty. 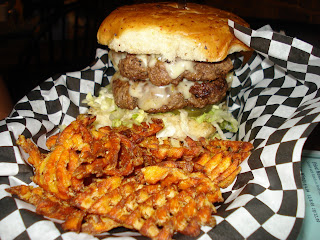 This is an aptly named burger. With two patties, sautéed onions, bacon, lettuce, tomato, pickle, and pepper jack cheese on a jalapeno cheddar bun, it was a beast of a sandwich. All the right things were here, the patties were big and thankfully full of beefy flavor. I didn’t get to try much of ’s burger, but his one complaint was the bacon’s flavor was nonexistent.

For my burger, I went for something with a more subtle name, The Flame Thrower. 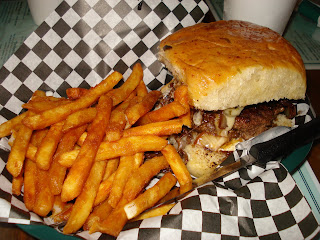 Actually when I ordered the burger, I was a little confused about the description. “A hamburger patty with sirloin steak, sautéed onions and jalapeno peppers, ranch, and pepper jack cheese on a jalapeno cheddar bun”. I had no idea how the sirloin steak fit into the equation. 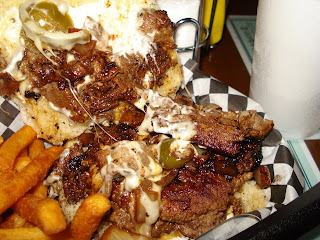 Opening the burger, I found that the sirloin steak comes chopped, undoubtedly the same steak they use in their Philly Steak & Cheese. 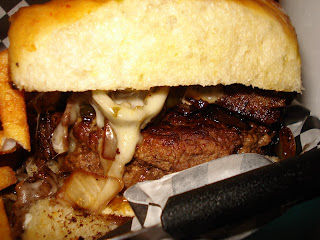 Once I figured out how to handle this behemoth, I found it to be a huge, greasy, juicy, and frankly delicious burger. The patty was beefy on its own but with the addition of sirloin steak, the burger only got better. I was worried that so many toppings would muddle the flavors, but in practice I found that The Flame Thrower was a beautiful mélange of flavors, but the beef was still king.

It’s hard to have a good burger without a side of quality fries. Thankfully, The Blue Rooster delivers on that as well. 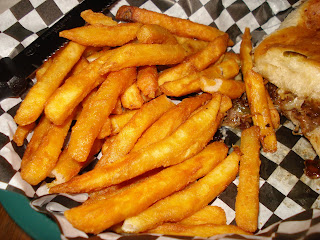 The fries are battered and delightfully crisp. 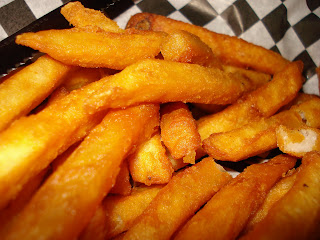 They were painfully unseasoned but still an excellent accompaniment to my burger.

If you saw a dessert labeled “Funnel Cake Fries”, you’d be interested too. Despite being full to the gills with burger, I convinced that we needed to try the Funnel Cake Fries, especially after our waitress’ enthusiastic description. 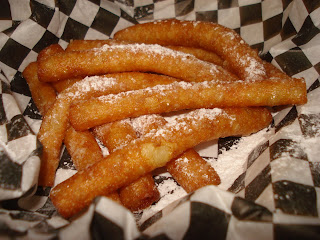 Well, what you see is what you get. It’s funnel cake batter that’s been poured into a fry shape. They were as tasty as funnel cakes get, but there was a serious lack of powdered sugar. I tried them with the optional chocolate sauce and was happy but slightly underwhelmed, especially when I couldn’t decide if it was Hershey’s or Nestle Quick.


It’s hard to make a fair assessment of a restaurant with just one visit. There are so many variables that make up a quality dining experience. There were some long periods of inattentiveness from our waitress, but with a substantial Friday night crowd, it’s understandable. Actually the one thing that bothered me was the lack of spiciness from The Flame Thrower. With jalapeno peppers and a jalapeno cheddar bun, I was expecting a burger with some kick. While it was an excellent burger, I was left wanting that spiciness. Even without a bit of pepper sourced heat, I will not hesitate to make a return visit to The Blue Rooster. Sure, it’s a few minutes drive from Jackson or Madison, but these burgers are some of the best I’ve had in and around .

The food was amazing. The Burgers were the star of the show, and there were other things on the menu that I’ll have to try later, but the burgers out there are awesome.