With a West Paces address, a parking lot full of enviable cars, and a fair number of conservatively colored suits, Blue Ridge Grill definitely gives off the aura of a power lunch spot. Once inside, I felt like I walked into an LL Bean catalog. There was a canoe above the bar, paintings of freshwater fish, and fishing paraphernalia everywhere. Having left both my suit and my bean boots behind, I felt sorely out of place at Blue Ridge Grill, but I decided to preserve and see what the food was like.

When I saw there was a charcuterie plate on the menu, my interests were peaked. Once I read that it was all house cured, I knew what my appetizer would be. 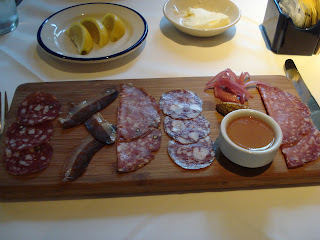 That’s solid charcuterie plate, especially for a lunch portion. From left to right there’s saucisson sec, duck ham, finocchiona, salami toscano, a rabbit liver moussiline, and pepperoni. It’s not often you see pepperoni on a charcuterie plate, but I had high hopes for that and the duck ham. 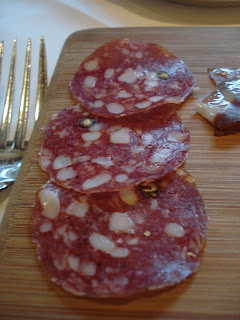 The saucisson sec , that marvelous French salami was first on the plate and was a wonderful start. Everything that makes a good saucisson sec was there, the dryness, the pepper, the clean pork flavor. 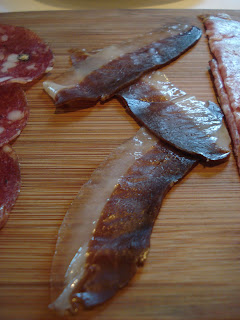 The duck ham was an intriguing part of the plate. Judging by the shape I can only assume the is made from the duck breast, and is more often seen as duck prosciutto. Well, this is like duck extract. The salting and drying compounded the flavors and made this a real treat. 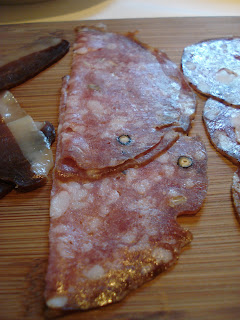 Finocchiona was next on the plate and true to form, the fennel dominated everything. Even those big peppercorns were obscured by the fennel, this was the first cured meat that actually tasted a little greasy. 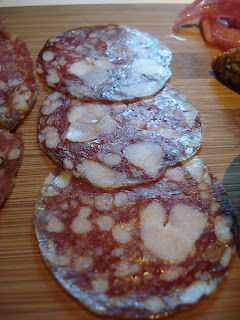 The salami toscano was almost a complete opposite of the finocchiona. Here the flavors were subtle and provided a nice background to the pork. 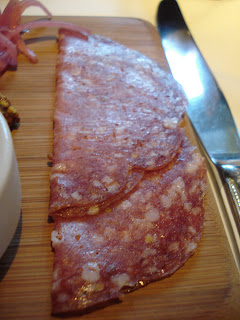 Last in the cured part of the plate was the pepperoni, or what I thought was pepperoni. This tasted like extra slices of finocchiona. There was no spiciness, no pork, just fennel. 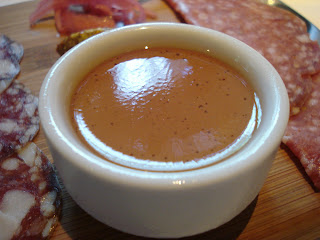 While all of the cured meats had their own vices and virtues, my favorite was the chicken liver mousseline. Beneath that rather thick gelatinous layer was a rich, creamy bowl of chicken liver goodness. With just a slight irony taste, this was a decadent end to the charcuterie plate and really the best selection.

Hoping to compensate for the pound and a half of cured pork products and chicken liver I had just eaten, I thought a nice fish would be just the right entrée. 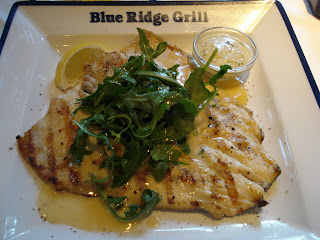 Of course the Grilled Georgia Trout is served a lemon cream sauce. Oh well, the road to hell is paved with good intentions, I can only hope they are all this delicious. 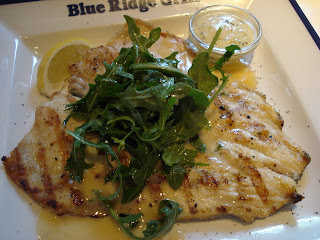 Perfectly grilled, tender, and flakey, this fish was in want of nothing. The fish could actually stand by itself, but the combination of the tart lemon cream, the bitter arugula, and trout was a knockout.

Truthfully, I had expected the Blue Ridge Grill to be much more pretentious. However, a rapid and extremely polite wait staff erased any preconceived worries. While the charcuterie plate had a few soft misses, it and the trout were overall excellent plates. Overall, I was extremely pleased with my meal at the Blue Ridge Grill and I wouldn’t hesitate to return.