The last time I was in Atlanta I was looking for something a little different, something besides the Asian and Latino delights that Buford Highway has to offer. Well, a discussion/argument ensued and many suggestions were covered. While the sole South African option seemed like a timely choice given the world cup, I decided that a French bistro sounded like the right choice. So after a short drive though the June drizzle, I found a parking spot just down the street from Anis Café & Bistro.

With the engineless 2cv out front, a covered porch, and walls full of French signs and posters, you would think that Anis is trying too hard to convey the French feeling, but it actually works quite well. Even with the evening humidity, the porch was full of lively patrons and was a really a nice place to be.

Let’s get down to brass tacks, the feel of a French bistro is all well and good, but if you don’t have the food to back it up, you’re spitting in the wind. So how well did the first appetizer go? 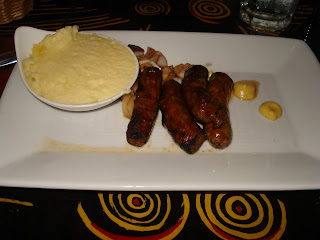 Saucisses Merguez Grilles or Grilled Merguez Sausage was served with a Yukon potato puree and onions “a la Grecque” and despite the heaviness of a sausage and potato appetizer, this was a great start to the meal. 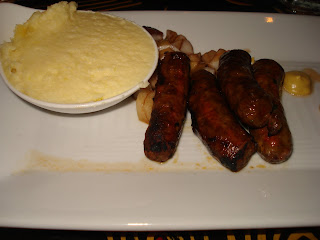 The sausage was well cooked, still juicy, and just a little spicy, really everything a merguez should be.

The second appetizer was a complete 180 from the sausage and potatoes of the first. 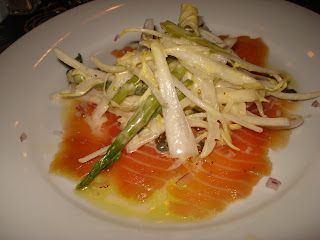 Sea Salt Cured Salmon Carpaccio with shaved asparagus, shallots, lemon, olive oil and herbs looks like an incredibly busy plate. At first I thought the heavy salad would completely mute the salmon but it all worked together quite well. The salmon had a delicate cure and with the asparagus and shallots, it made for a wonderful taste combination, but an oily one.

When it came time to pick an entrée, I was at a bit of a loss. I really wanted to try every entrée on the menu, but that was out of the question. So I took a stab in the dark and tried the Joue de Veau Braise or Braised Veal Cheeks. 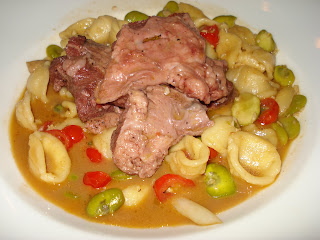 Served on a bed of orchiette pasta, grape tomatoes, fava beans, and garlic jus, these cheeks have a winning combination. The cheeks were very well braised, falling apart with the slightest touch. However the orchiette must have been braised as well. Each piece was too soft and completely overcooked. The garlic jus was insipid, the cheeks needed more seasoning, and really the whole dish was in dire need of salt. It really was as if this plate left the kitchen without the tiniest amount of basic salt and pepper.

I hate when this sort of thing happens. Anis has so much going for it. There’s a great setting, a beautiful and quite comfortable porch, but the food was unimpressive to say the least. I’m hoping that I ordered the wrong entrée, but aside from the Merguez, the other dishes felt lacking. With the salmon it was a lack of moderation with the oil and with the veal cheeks it was a lack of seasoning and properly cooked pasta. I won’t completely write off Anis, but for as little time as I spend in Atlanta, it won’t be on my list of must revisit.