For such a small town, there are a number of places I’d like to try in . However, for our one night in Oxford, we left the college town for the speck on the map that is . With a population of less than 300, I immediately thought we were lost. Surely, this little square isn’t where we find that of fried catfish is it?

Yes, it is, and after indulging in the virtues of brown bag wine and Styrofoam cups, we made it inside. There’s a full frontal assault of country kitsch in Taylor Grocery with a nice side of Ole Miss Paraphernalia. Looking past the country look, with a medium sized crowd, a man and his guitar providing the entertainment, and a good group of friends, I can already see how Taylor Grocery holds a place in many Ole Miss Alumni’s hearts.


While fighting a battle with an errant cork screw and ornery cork, someone had the foresight to order an appetizer for the table. The Sausage and Cheese Plate is the epitome of simplicity. It’s nothing more than grilled sausage, sliced pickled jalapeno peppers, bbq sauce, and cubed Velveeta cheese. 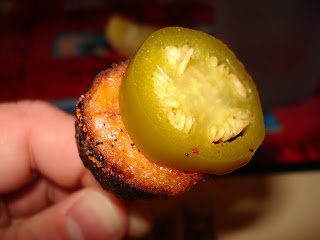 Even with these ultra processed, basic ingredients, the sausage plate was immensely satisfying. 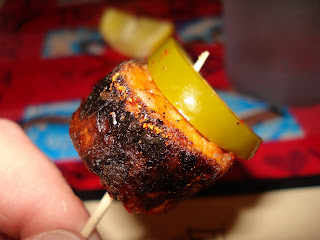 Besides eating something with toothpicks is always entertaining.

Looking for a personal appetizer, I asked the waitress which she would suggest, the shrimp and chicken gumbo or the fried shrimp? Her slightly pained expression at the gumbo cemented my decision, and her explanation about how the shrimp are battered in the kitchen sealed it. That being said, why should the shrimp come pre-battered at all? 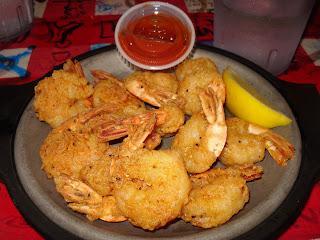 It was about time a waitress’ suggestion paid off as these shrimp were lightly battered, well seasoned with just the right amount of salt and pepper, and very well fried. Each shrimp was juicy and not the least bit overcooked.

Looking to give me some advice, Molly and Kate told me not to get the whole catfish because it came with the head still attached. Well that was enough advice for me, I ordered the whole catfish dinner. I love seeing whole, bone in pieces on my dinner plate. 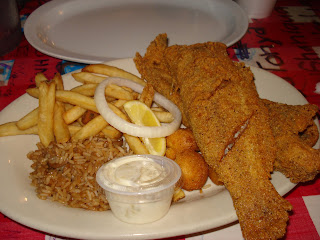 The first thing that crossed my mind was “Where’s my damn fish head?” 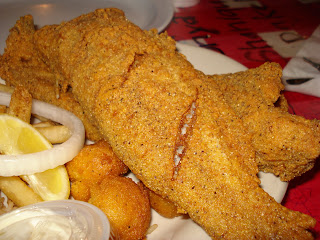 Oh well, even without the heads, this is still a substantial amount of fish and a delicious amount at that. With a salt and peppered crispy crust covering tender, moist meat, this was an excellent example of fried catfish. Once I figured out how to get all the meat off without a mouthful of tiny bones, I was really able to enjoy these not at all greasy fish. 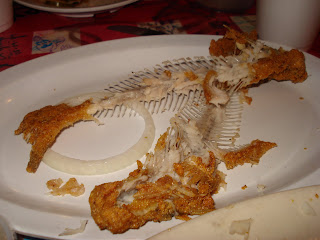 In the end, I think I did a pretty good job getting the meat off those catfish. One interesting thing about the catfish was the quantity. Even though there were only four filets on the fish, this was one of the few times there was almost too much catfish to eat. Usually a restaurant will give you two or three tiny filets and leave you wanting more, but I was fully satisfied here.

Of course all was not well in the world of the Taylor Grocery. 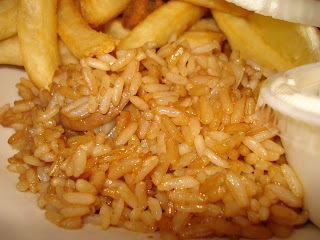 My first side was “Big Deb’s Famous Brown Rice” and this was just Uncle Ben’s Brown Rice with canned sliced button mushrooms. 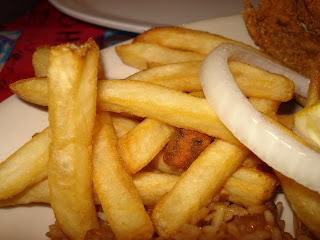 Even though the Taylor Grocery can fry up a mean plate of shrimp and catfish, these French fries are limp, bland, and poorly fried. 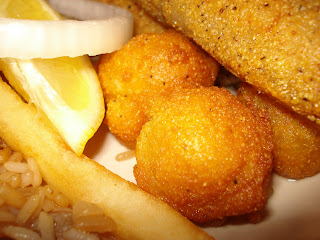 You would hope the hushpuppies would be just as good as the seafood, and they weren’t bad. The hushpuppies were balls of plain, fried cornmeal, no real flavor, no special seasoning, just simply there.

When I was told we were going to dinner at the Taylor Grocery, I was given a bit of a warning. I was told people go to Taylor for the atmosphere, not the food. After dinner, I can agree with that statement. The Taylor Grocery is overflowing with that unique, charming country atmosphere, but there is some pretty good food to be found there, it just wasn’t a complete package. That being said, I’m still glad that I finally got to see what Taylor Grocery was all about, and I’d go back without hesitation. I’ll just bring my own corkscrew and forget the sides.