I can’t figure Que Sera out. On one hand it’s arguably the longest running Cajun/ style restaurant in . Home to award winning gumbo and red beans & rice, and a beautiful porch, Que Sera should be an all around winner. On the other hand, I’ve been spending more time examining their menu and can’t quite understand what the fuss is all about.

So, I’ve had takeout from QS a number of times, but there I was, ready to set down and see what the food is like fresh from the kitchen, no flavors muddled by any styrofoam condensation. Well, what better way to start than with a bowl of their 4 time grand prize Duggan’s Seafood Gumbo. 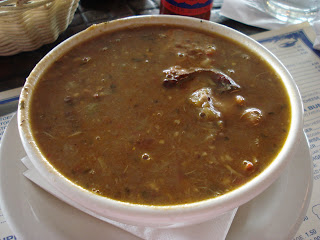 This bowl of gumbo certainly looks the part. 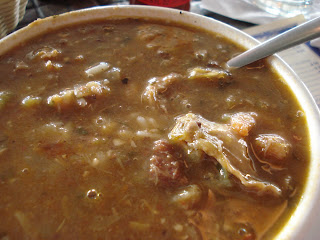 There are chunks of smoky andouille, shrimp and even a token oyster or two. In addition to the pork and seafood, there actually is a decent depth of flavor here. On the other hand there’s no real cayenne kick and a few dashes of hot sauce only make it so so. One real annoying feature is the overcooked seafood. The oyster is mealy, the shrimp crumbly, and it all makes for an ok gumbo. I don’t see this winning awards but it’s not bad.

Bowl of gumbo aside, what really caught my eye on the menu was the Sloppy Roast Beef Po Boy. It was a rainy, relatively dreary day outside, what better time for hot roast beef? 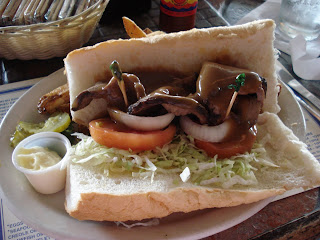 I know I often work myself up for a roast beef poboy, conjuring vivid memories of my first Parasol’s poboy, but this was a let down of all let downs. 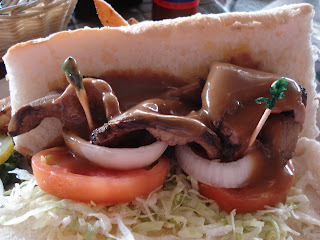 Honestly, how can you put three slices of chewy beef on a mountain of French bread and call this a Sloppy Roast Beef Po Boy? Here, what you see is what you get. The beef is chewy and unappetizing, the gravy is bland and reminiscent of a packet of powdered gravy, and it’s not even dressed properly. This is really just a terrible example of a poboy.

The accompanying fries, while better than the poboy, were still a mixed bag. 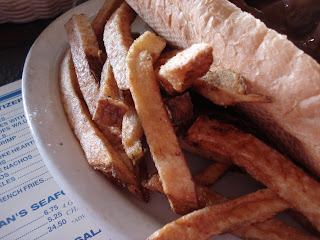 Some are crispy, some are doughy and listless, some have a dusting of a salt & cayenne mix and others are untouched. 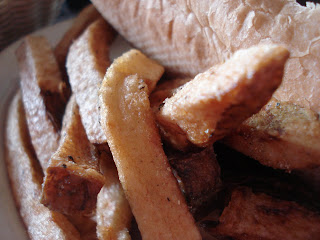 I appreciate the rustic look of the unpeeled French fry, but that’s about the .

After that, I was ready to call this a done deal. I hadn’t seen anything redemptive about Que Sera Sera. However, I couldn’t shake the suspicion that I missed something. So, I promised myself I would come back.

It was a few weeks, but one lunch hour I drove to Que Sera Sera, parked myself in a booth, and set out to see what was missing from the first experience. One thing that immediately improved was the service. This time I had a dedicated waitress, not two waitresses juggling my table back and forth, constantly dropping the ball. Another marked improvement came in the form of the soup of the day, Corn & Crab Bisque. 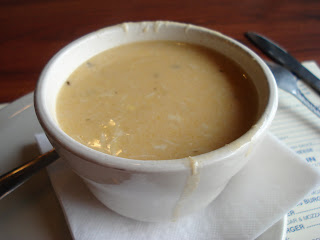 Initially the flavor was a little watery, but I soon found a good crab flavor hiding in the bowl. 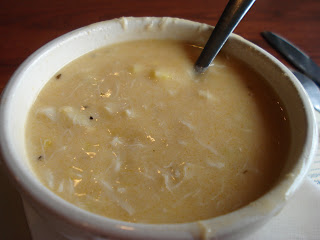 Also in the bowl was plenty of corn and crab meat, albeit the cheapest type and completely shredded. There was an upfront spiciness to the soup, but I was a little disappointed in the creaminess of the bisque or lack therein. Even so this was a decently satisfying bowl of bisque.

Always on the lookout for something completely unnecessary, I decided to investigate the sloppy fries. 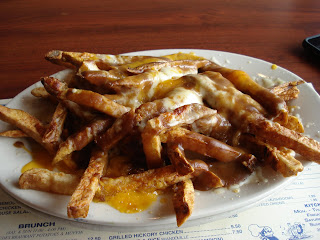 I was told by the waitress it was a combination of fries, gravy and two types of cheese. Well, QS may call them Sloppy Fries, but this a plate of poutine. 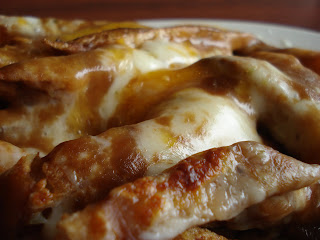 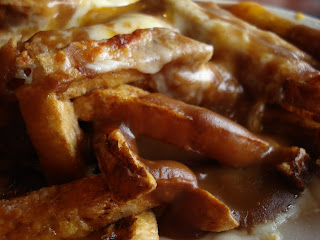 The gravy is the same as on the Roast Beef Po Boy, although it’s not as bad here. It’s still not very beefy gravy. This is a decent appetizer, but it makes me miss real poutine.

Looking to get a different look at QS’s menu, I decided to try a different sort of entrée this time, the “national award winning” seafood pasta. Of course, a bowl of pasta isn’t enough on its own, I apparently needed a salad. 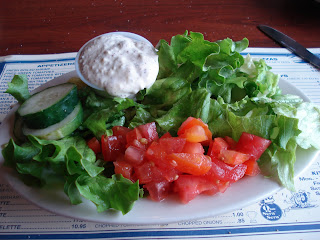 There’s not much diversity to this salad, but it certainly has a lot of tomatoes and remoulade dressing. 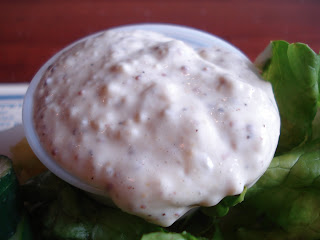 The remoulade did have a nice tang to it, but this was about as interesting as salad can be.

It seemed like a bit of poor planning, but I didn’t have time to eat more than a bite or two of my salad before my entrée hit the table. 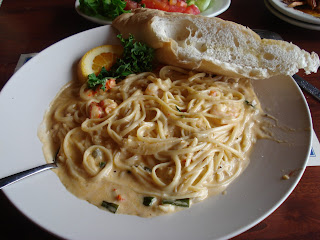 Of course ordering a pound of pasta and cream sauce for lunch was a good idea. 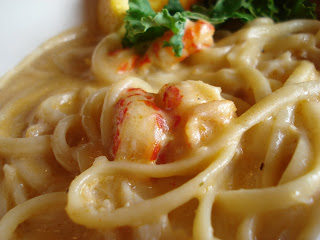 There were a few pieces of shrimp and crawfish to make this live up to its name, but there was a shockingly small amount of seafood for this weight of pasta. 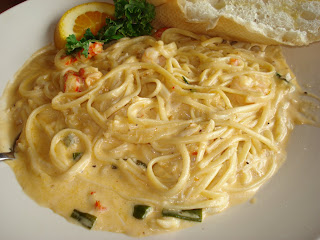 After the first few bites it hit me, I’ve had this before. This Seafood Pasta reminded me of Donald Link and his recipe for Spicy Crawfish Fettucine. This pasta seems like it could be a starting point for Link’s, but this dish is missing the spice and depth of porky flavor. Here it’s just cream and seafood.

Apparently I’m a glutton for punishment. Another few weeks have passed and I’m back in a booth at QS. At this point, I’ve had a marginally poor and a marginally positive meal at QS and I suppose the third one is the tiebreaker.

Going on a suggestion from a reader, I went straight for the burger. 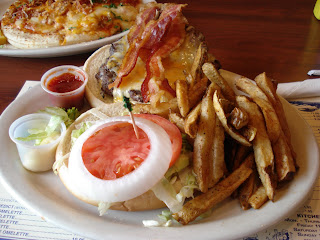 Somewhere under that mound of bacon is the Works Burger, essentially a bacon cheeseburger with mozzarella and cheddar. 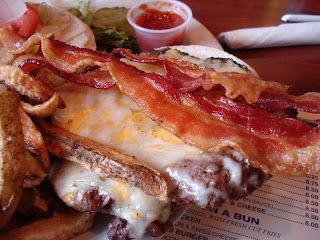 The cheese is certainly nicely melted, and the patty was cooked exactly to my liking, medium rare. However all that melted cheese and char grilling overpowered and overshadowed any chance that beef had to shine through. 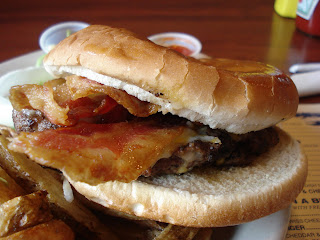 The bacon is bland but crispy, but somehow it all works together to make a pretty good burger.

In the top left corner of the menu at QS there’s a section for Pizzas. Pizzas in a Cajun restaurant, that doesn’t sound right. Apparently these are the “Original Cajun Pizzas” and you get a choice of three, Acadian, Italian, or Combination. After asking the difference, I was told the Acadian has a Seafood Pasta sauce, the Italian has Italian Sausage and the combination mixes the two together. Well, who can resist the allure of seafood pasta sauce and Italian sausage?

I’m not sure what I was expecting but this is quite a surprise. 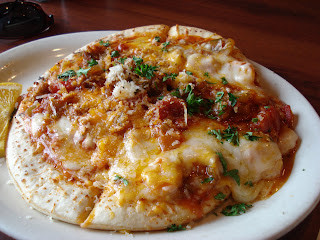 For some reason, QS is in love with a the cheese combo of mozz and cheddar. 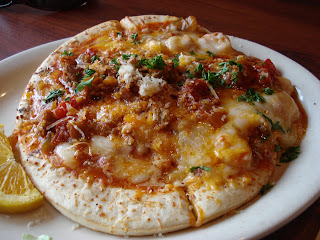 Going for a bite of this behemoth is a real challenge. The second I picked up a slice, the toppings began to slide off, no doubt helped by the ample supply of grease. Working quickly I got a few bites in before everything hit the plate. 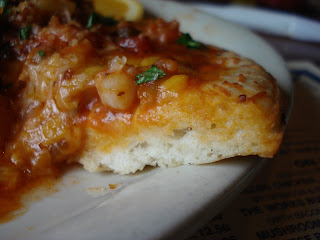 To begin with this is crap pizza dough. This is just some big round of flatbread that tastes like soggy cardboard. While the seafood sauce, although bland, and the Italian sausage are a decent combination, there’s just too much liquid and grease to work here. 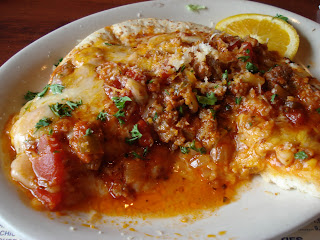 With a pile like that, you can’t eat more than one slice. I can see this working with a better pizza crust, a tighter sauce and not so much cheese.

I think the Seafood Pasta and the Combination Cajun Pizza sum up my sentiments pretty well. These dishes judged by their own virtues are pretty half assed. However, they have potential. With just a few tweaks, a little extra spice, a better crust, something besides the mozz and cheddar combo, these could be top notch dishes. Like the dishes, Que Sera Sera isn’t bad, it just tastes like the food is good enough. The porch is excellent, the service is spotty but pretty good when the needle is in the groove, and the food? It’s just there. It took me almost a solid two months to get to Que Sera Sera three times, there was nothing there that made me want to go back. Still if your thing is a Fondren view and something domestic, light and cold, you’re in fine shape. I’ll just have to keep my eyes open for something else.

the patio has been the best thing about que sera for as long as I can remember.

The roast beef is terrible, just terrible. Stick with the red beans, gumbo, or bar food (burgers and sloppy fries). Brunch is pretty good though.

-Well, it certainly is a nice patio

-Even with the bar food, I kept thinking this needs more work. I haven't had a chance to try their brunch, I'll have to rectify that.

-I'm sorry to hear you had such a negative experience at Que Sera. I can't say that I share your same level of disgust, but I'd be in the same boat if I'd received rotten shrimp twice.

My husband worked there as a waiter during college. One thing he took away was that the owner was cheap. This means charging a quarter for extra slice of bread, charging the waitstaff if they break glassware, charge for xtra cheese, etc. It also meant the menu items were prepared cheaply. Which is why I always leave with the feeling that they are on the right track, but just too darn cheap to prepare the food properly. I'm always left wanting.

I guesss cheapness would explain the willingness to serve rotten shrimp.

Some 20 years ago that building housed a little catfish place run by a family from N.O. I think it was called TuJay's. The catfish was great. Much better use of the space.

I agree with the review - how has this place managed to stay open so long?? Answer: The deck, cold draft beer and pretty good mixed drinks. People like to say Que Sera has great "hangover food," but let's face it - what they really want is hair of the dog.

I can vouch that their pizzas used to taste good, especially the cajun pizza - it had a zesty, homemade flavor and the crust was delicious. However, the last one i ordered tasted like a microwave pizza, so apparently the owners downgraded the ingredients and upped the price. Around that time (probably 2005) i stopped going to Que Sera for meals, because the pizza was really the only thing i liked on their menu. And I had tried just about everything. It's still a fun place to sit outside and meet people for drinks.

Your best bet: something fried on the appetizer menu, like crawfish tails or pickles. Their brunch used to be a good bet, but i haven't eaten it in years and can't vouch for it now.