It had been a late start but Alvin, Kate, and I finally pulled into . For many Mississippians, is spoken of in revered tones, and they will wax nostalgic for hours about their years at the Grove. Personally, it’s never been much of a big deal. I wasn’t raised as a State or Ole Miss fan, so was just another small town. Well, there I was in for only the third time and I was at the mercy of two Ole Miss Alumni.

Thankfully their first thoughts were of lunch and I was directed to the Phillips Grocery. Outside it looks like a wooden shack, but with plenty of Colonel Reb paraphernalia. Inside, I couldn’t help but notice the signs declaring Phillips Grocery as one of the best burger joints in the . Granted, that title was given by USA Today over 20 years ago. Still, it’s hard to turn down a good burger.

Hoping to pick the award winning burger, I asked the cashier which burger had brought home the title. Annoyingly she said all the burgers were award winners. Not knowing what a “Phill-Up” or “Super Deluxe” consisted of, I decided Super Deluxe sounded like a fine choice.

In just a short while my order hit the table. 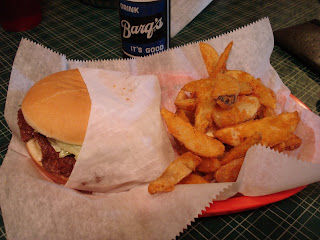 A Super Deluxe burger with a side of spicy fries. Pair that with a classic Barq’s and you’ve got a fine looking lunch.

Maybe I’m alone on this but when I see something labeled as “spicy” on the menu, I’m expecting a little kick. 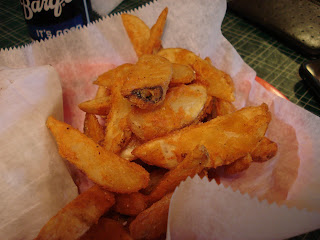 Well, these are battered, fried potato wedges and there’s no spice here. 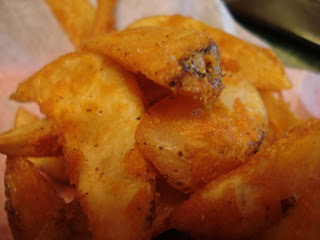 With just a little seasoning, these were pretty good wedges, I just don’t like a misleading title.

That’s enough with the French fries, how about the award winning burgers? 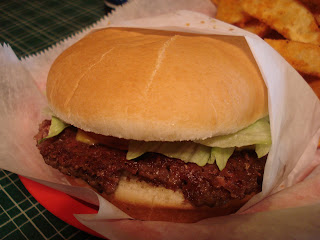 Honestly, there’s not much in the way of a patty here, but it does have a fantastic griddled texture. 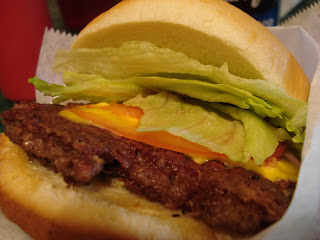 Unfortunately, any real beefy taste was lost in the dressing, and this burger was dressed to within an inch of its life. There was lettuce, mayo, mustard, pickles, onions, tomatoes, and cheese.

I’ll be frank, I was unimpressed with the Super Deluxe burger. I love a griddled, flattened patty but there just wasn’t that much to it. However, I’m curious about the rest of the menu. Maybe the bacon burger, or the “Ole Tyme: Chili”, or “Phill-Up” burgers are the real winners. I’ll just have to save those meals for my next trip to . Hopefully that one doesn’t take another 5 or 6 years to come to fruition.

You missed out. The Phillips in Oxford is ok. The one in Holly Springs is the business. And the Phill-up was the way to go, as it features a patty, ham, and bacon. Three meats, one burger: total bliss.

-So I went to the wrong Phillips and ordered the wrong burger.....damn. I guess have something to look for next time.

Chowhound has quite a few threads on Oxford food. Oxford may not be large, but there are more than a few places to get great food there. I'm always seeing the name of the owner of City Grocery (and other restaurants) in Food and Wine magazine.

I don't know about Holly Springs, but if you come to the Oxford location for lunch you're missing the boat. Come by on a Friday night (usually not busy), and order off the nighttime menu. A regular bacon cheeseburger (specify how you want it dressed next time), any of the grilled catfish offerings, or a lg or sm ribeye are the way to go (the grillmaster is a genius, and a fox to boot). If you want fries, skip the spicy or sweet potato (frozen and delivered) and go for the regular hand-cut ones that are made in-house. If none of those are your thing, the fried shrimp is also pretty yummy although a bit underseasoned. The steaks don't have much in the way of seasoning, but they have everything they need and are reminiscent of summer days grilling out with the family (if the family ever got your steak cooked the way you asked, which is an art form at Phillips).