It’s been more than a year since I last ate at Olga’s. Every time I pass it on the interstate or frontage road, I feel a slight pang of guilt. I know I should give it another try, but when it comes to choosing a restaurant, it rarely crosses my mind. However all that changed when Kate was free for lunch and guess which restaurant she had a coupon for? I suppose it takes an out of towner to make me rediscover .


Lunchtime at Olga’s has a slightly different atmosphere than the one dinner I had experienced. Granted it would have been more than a little odd to have someone playing Christmas carols on the piano in the middle of June. Anyway, as before the service was prompt and attentive and it was no time at all before the first part of lunch hit the table. 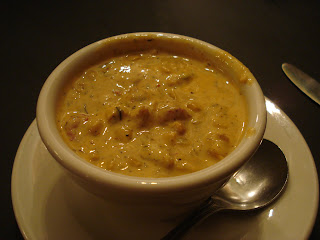 Crawfish and Corn Chowder was the soup of the day and I was immediately a fan. 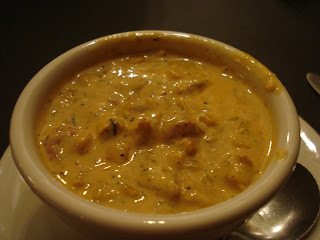 Usually a chowder is heavy on the veggies and light on the meat, but here that was an abundance of both. Like any good bisque, this cup was decadently creamy, but there was a nice kick of cayenne to balance the richness.

I remembered trying the Pirogis the last time I was at Olga’s and I had come away a little disappointed. This time I knew what to expect. 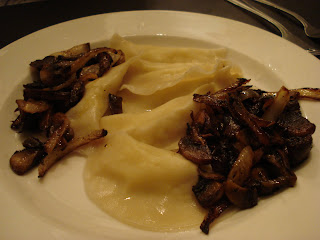 The mushrooms and onions are still very well cooked and the pirogi soft with a very smooth potato filling. While everything was juicy and a little oily, it was still bland. Maybe even a little salt and pepper before cooking would help, but there’s just not much here.

In an odd sense of déjà vu, I took the waitress’ recommendation and went with the day’s special, a rib eye sandwich. 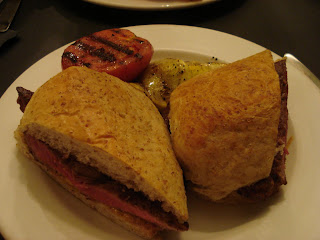 This was a pretty hefty sandwich and extremely well cooked, a perfect medium rare. 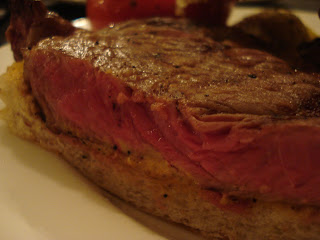 There was also a very nice Creole mustard that went quite well with the steak. Unfortunately the sense of déjà vu continued as this was a poor cut of beef. Beyond chewy and full of gristle, there was no way to eat this sandwich without making a hash of it.

That really seems to sum up my experiences at Olga’s, at least as far as steaks. Everything is very well prepared, it’s just a poor cut of meat. I realize this wasn’t an expensive sandwich and restaurants need a healthy margin to stay afloat, but bargain basement select meat just doesn’t cut it. If I do make it back to Olga’s, I’ll be sure to avoid the steak, but I’m still torn on the pirogis.

For part one of Olga's Fine Dining, please click here