It had been another successful Memorial Day weekend. ZZ Top had played Carb Day and this year’s Indy 500, while brutally hot, featured another stirring finish. However it was time to leave the bosom of the and make my way back down south. Getting an incredibly early start, I soon realized that I could make for lunch and we know what that means….bbq.

The last time I was in was with Jennifer and Aaron and it was a bbq feast, but of startlingly mediocre quality. The worst of that trip was by far Neely’s Bar-B-Que in downtown . It wasn’t until after that visit that I learned I had visited the wrong Neely’s. The real, famous Neely’s is Jim Neely’s Interstate Bar-B-Que on . Looking to rectify my past experience, I drove through some less favorable parts of and parked at Neely’s Interstate Bar-B-Que.

After finding a seat near the kitchen, I sat unattended for a good five minutes. I immediately felt a sense of déjà vu, but I overheard one waitress telling another to take care of my table. Soon, I was brought my drinks and a menu, making this experience already miles ahead of the other.

With my order in, I held my breath wondering if it would be another hour wait for terrible bbq. Thankfully, the real Neely’s and a very helpful waitress made it a short wait. The first dish on the table was another order of Bar-B-Q Spaghetti. 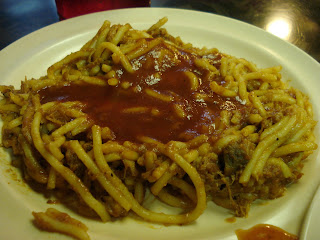 Last time, Aaron had described this as “perfect stoner food” and that still stands. It’s an interesting combination of spice, bbq sauce, and Italian seasonings. I’m still not completely sold on the idea but I can see its virtues.

Moving to more familiar territory, a large order of pork ribs was next on the table. 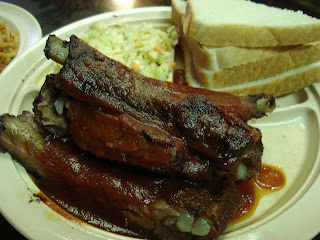 A few bites revealed a hot and fresh order of ribs with a smoky and slightly spicy flavor from the sauce. Thankfully the ribs were not overcooked as they still needed a little tug to pull the meat from the bone. 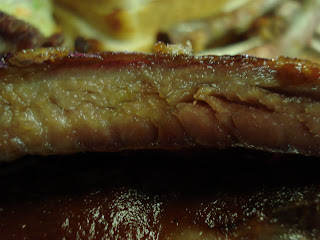 At the last Neely’s there had been a worry about all the smoke coming from the sauce, at Neely’s Interstate you can clearly see the smoke ring on the ribs. 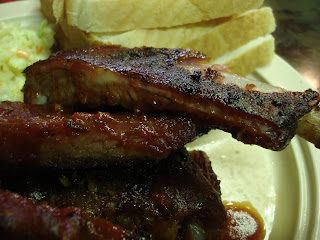 One thing I found interesting about these ribs was the taste of cumin. It’s not something I often find to be pronounced in bbq rubs or sauces, but it works quite well here.

The last of my three dishes was a Large Chopped Shoulder Sandwich. 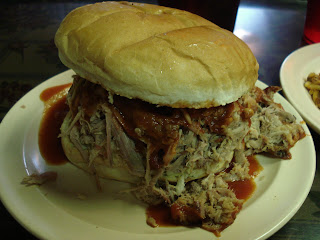 Well, there’s no false advertising here. This sandwich was literally too big to eat. Each time I tried to take a bite, the pork started overflowing the bun. 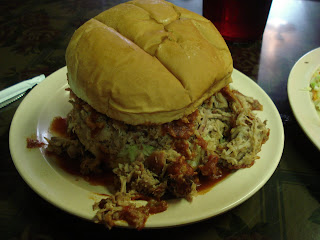 The toasted bottom bun was a nice touch, the pork was tender and quite flavorful, and the coleslaw provided a great crunch. The sauce, while tasty and with more of the head and spice, was not enough for this size sandwich. I can never seem to get that right; it’s either feast or famine when it comes to bbq sauce on a pork sandwich.

Completely full of pork and with a few to go items, I hit the road back to . On the way, I was able to cull together a few thoughts about Neely’s Interstate. My experience was hand over fist better than the other Neely’s. The waitress was relatively prompt and very helpful, the food didn’t take an hour and was much higher quality, and it was nice to see Jim Neely poke his head out from the kitchen. I still don’t quite get Bar-B-Q Spaghetti, but to each his own. I still pick Rendezvous as my go to place for bbq, but Neely’s Interstate is a fine choice and must visit for anyone looking to get some quality bbq.

Long time fan, first time poster...just recently moved back to Memphis from Jackson, and I'm glad to see that you've taken up some of what Memphis has to offer. However, if you're looking for the best BBQ in Memphis, it's at Central BBQ (on Central Ave., there's one on Summer but it's not as good). Should you venture up this way again, be sure to try it out.

-Thanks for reading and thanks for the bbq tip . I'm not often in Memphis, but when I am, good bbq is always top on my list.

Try Payne's on 1700 block of Lamar (not the one on Elvis Presley) and Cozy Corner. Both have been in top10 lists for Memphis BBQ since the 70s. Cozy Corner is a big presence in Lolis Ellie's book Smokestack Lightening.

The Cozy Corner has one bbq anomaly, a bbq cornish game hen. Getting one hot is a wonderful bbq experience

I've only eaten in Interstate of the Neely's places, and don't much care for it.

btw, I've been reading and enjoying your blog for a few months and only just noticed you allow comments...