As far as I can tell Richard Blais’ Flip Burger Boutique in has been nothing but a rousing success. The menu never gets dull, the quality has never deteriorated, service is still top notch, and it still seems to draw a crowd. With such a measure of success, I suppose it was only natural that Blais would look to expansion. A new location in Buckhead is the latest plan for Flip but the first site of expansion was The Summit in . Seeing as I was on the way to and in need of lunch, I decided to stop and see the difference between the two Flips.

Stepping inside, you can’t help but notice the flip theme has been carried over to . However higher ceilings mean there’s a nice gap between the ceiling and the top of the flipped booths. Anyway the menu looks to be much the same as well. There’s a nice selection of 10 or so beef burgers and 10 “flip” burgers that range from turkey to crab to chorizo, really a et al category.

The real problem with most burger places is figuring out which burger to get and Flip is no exception, but after a little internal hemming and hawing and advice from the waitress I placed an order for an AW burger and an order of Sweetbread Nuggets. 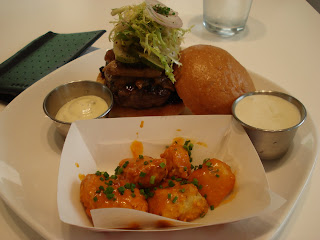 It wasn’t until the food arrived that I remembered the menu said Buffalo Sweetbread nuggets. 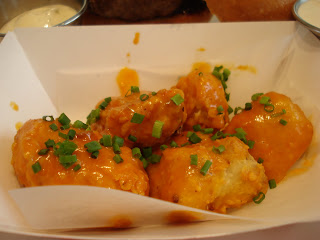 I was a little apprehensive about the idea of buffalo sweetbreads, wouldn’t the subtle flavors be lost in a sea of peppers and vinegars? Well they were. The wing sauce wasn’t very spicy and whatever flavors the sweetbreads had to offer were completely muted.

Another odd feature was the dipping sauce, a choice of ranch or blue cheese foam. At least it was called foam on the menu. A little background from the waitress revealed that the location had always had Buffalo Sweetbreads, but the foam was long gone. The truth lies somewhere between the foams being too much of a hassle and the clientele not liking them. Now it’s just two metal cups of dressing.

Moving on to the burger, the AW burger stands for American Wagu and if that level of decadence wasn’t enough it’s served with seared foie gras, caramelized onions, truffle oil, b&b pickles, and red wine syrup. 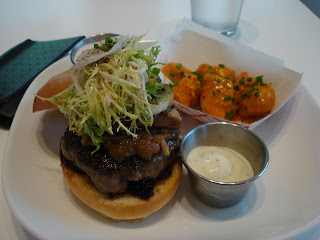 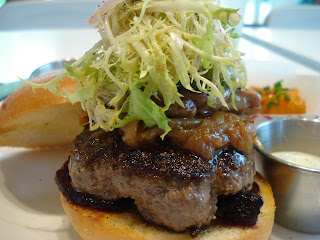 Cooked a perfect medium rare, the richness of the beef and the foie gras was overwhelming, but the pickles provided just enough tartness to cut through the fat. 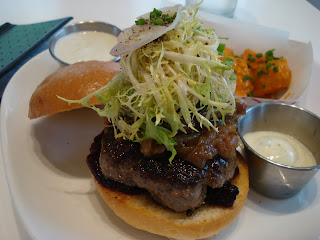 One complaint is about the shape of the foie gras. I realize for $13, I wouldn’t get enough foie gras to cover the burger but it seemed to disappear in one bite. Surely there was a way to spread it around without making a mess. As for the rest of the ingredients, the greens seemed unnecessary, the truffle oil was lost in the fray, the red wine syrup was actually quite nice and not at all overpowering. While not as good as other flip burgers I’ve had, this was still head and shoulders above your average “Majestic” burger joint.

For as much noise as was made about the American Wagyu burger and the Buffalo Sweetbreads, I was ecstatic to finally try the Foie Gras milkshake. 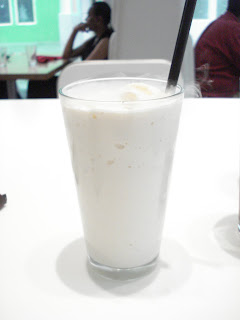 Served still bubbling from the liquid nitrogen, the milk shakes at Flip alone are worth a visit. 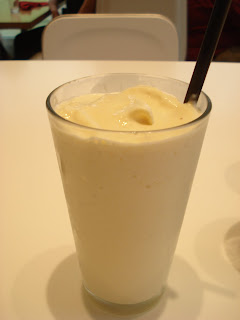 With the nitrogen vaporized, I was finally able to dig and relish the rich onslaught of…..vanilla? Yep, all I could taste in this was vanilla. Actually I asked the waitress about the missing foie gras flavor and she says they go heavy on the amaretto in this location. So that’s it, it was all amaretto. 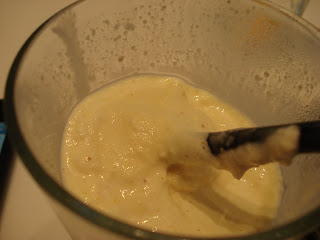 Don’t get me wrong, I think those little brown specs are pieces of foie gras, but there’s certainly nothing foie like in the flavor. After all that to do about liquid nitrogen foie gras milkshakes, it boiled down to a vanilla milkshake. This was a completely badass vanilla milkshake, but still vanilla and almond all the way.

I don’t’ want to say that Flip Birmingham was a let down. The burgers are still excellent, the location & wait staff are great, and the milkshakes are delicious but the missing foie gras just got to me. That being said, I’m glad to see there are a few subtle differences between this location and the original. At the very least, it never hurts to have an excellent lunch option on the way to .

I was so pleased to see your reveiw of this Birmingham Restaurant. I really enjoy your reveiws of Jackson and surrounding area restaurants. I am also making a couple of trips to Atlanta in the next couple of months and was looking for a new place besides Panera and Cheesecake Factory for lunch. This looks like the place to try.