It’s been nearly a year since Sam & Mookie’s and the Boston Beer Company held a Sam Adams Beer Dinner. In that year, I’ve been eagerly waiting for the next beer dinner email from Jeff Good, but as the months and weeks passed by, it quickly slipped my mind. However last week my wait ended. A new email arrived in my inbox advertising a new beer dinner! This time the stars were the beers of the Atlanta Brewing Company.

I’ll freely admit that I didn’t know much about the Atlanta Brewing Company. Whenever I drink the local beer in , it’s all Sweetwater, but it seems that ABC is a little older than Sweetwater. Started in 1993, Atlanta Brewing Company is the oldest craft beer company in the state. Since they’ve recently expanded their market into , it seems like a beer dinner is part of the natural progression.

With Bob Budd, president of Atlanta Brewing Company, explaining the company and the beer, the dinner got underway. First was the welcome beer, Numbers. 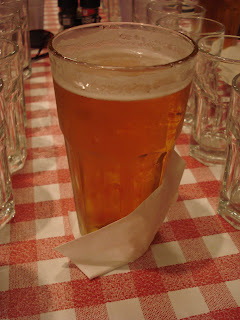 It never hurts to start dinner with a nice Ale.

While Bob was explaining the history of ABC, the first beer and food pairing came to the table. 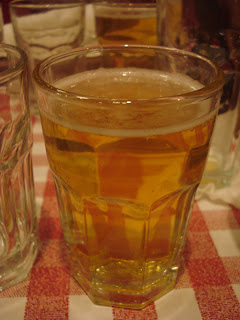 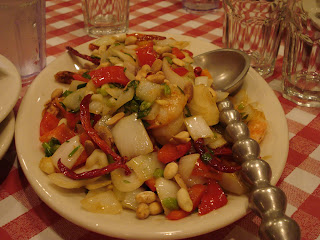 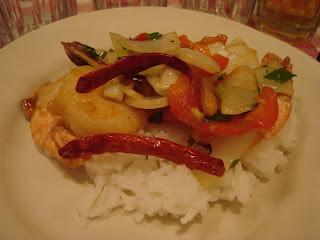 You can tell Sal & Mookies doesn’t cook much Asian food as this was as bland as could be. The shrimp were well cooked but no real seasoning, the Red Brick Blonde was quite nice though.

The next beer was the Red Brick Peachtree Pale Ale. 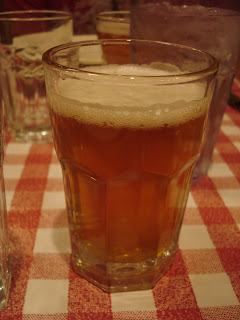 This is described as an American-style Pale Ale, I suppose that means it’s not as hoppy as an India Pale Ale. 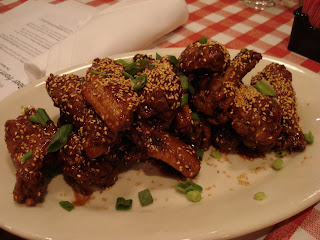 Served with the pale ale were the Orange-Sesame Chicken wings. 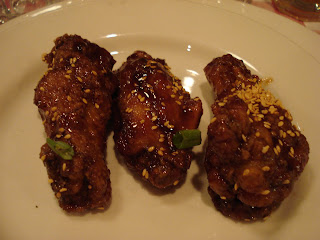 These wings were leaps and bounds ahead of the first dish, and were quite tasty. It was as this point the three to a person rule got more than a little annoying, but I suppose it’s for the greater good.

Seeing as Sal & Mookie’s specializes in pizza, it should come as no surprise that the third course was a pizza. 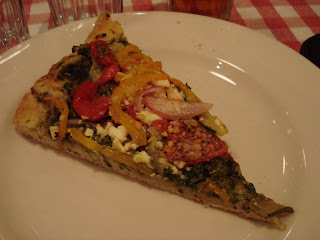 This was a hearty slice of the Sicilian-Style Grilled Summer Vegetable-Pesto Pizza. Ignoring the long name, this was an excellent pizza and one that I hope is a new addition to the Sal & Mookie’s menu. 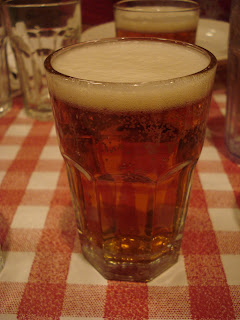 When they said the pizza was served with Laughing Skull Amber Ale, all of the Vortex logos around Sal & Mookie’s began to make sense. Apparently, after a hiatus, the Atlanta Brewing Company again brews the house beer for The Vortex in Atlanta. It’s always nice to know the back story to what you’re drinking, especially if it involves Harley riders and not so subtle coercion.

With the dinner beginning to wind down, we moved on to our last savory dish, but first the beer. 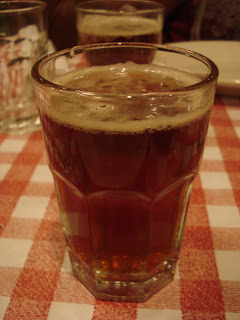 Red Brick Ale, the brewery’s first beer from 1993 was paired with the best dish of the meal. 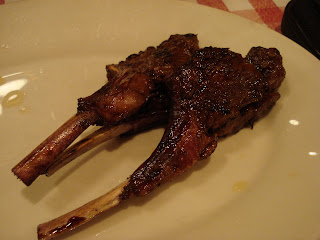 Black Pepper Brown Ale “Painted” Lamb Lollipops really stole the show. The glaze added a perfect peppery punch to the lamb and the lamb itself was an amazing medium rare/medium and tender as could be.

Of course a beer dinner just wouldn’t be complete without a dessert and a dessert like beer. 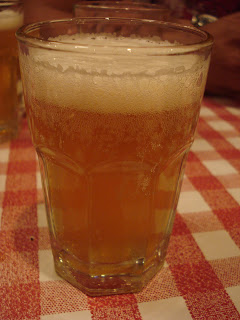 Well, I suppose the Red Brick Summer Brew, a hefeweizen is somewhat of a dessert beer. 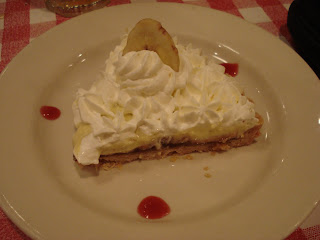 It seemed odd to have a hefeweizen without a slice of citrus, but serving it with a Banana-Nutella Cream Tart is a interesting choice. I never have been a big fan of bananas and whipped cream, but this came with nutella and a good crust, Overall this tart was a great way to end the meal.


It doesn’t seem fair to compare this beer dinner to the Sam Adams beer dinner, at least that’s what I thought after hearing Bob Budd. Budd was very adamant about people supporting the Southern and local craft breweries and how the Southern brewers craft beer that’s more pleasing to the Southern palate, ie sweeter.

There was one annoying thing about the dinner, the missing beer. I had read about ABC’s Double Chocolate Oatmeal Porter and was excited to try it. Of course, and its “Bootleggers and Baptists” regulations or tax squabbles kept us from enjoying this 7% alcohol beer. Anyway, I had a great time at the dinner and thoroughly enjoyed Bob Budd’s beer, not to mention Jeff Good and Dan Blumenthal’s food. I can’t wait till the next beer dinner; I just hope it doesn’t take a year.